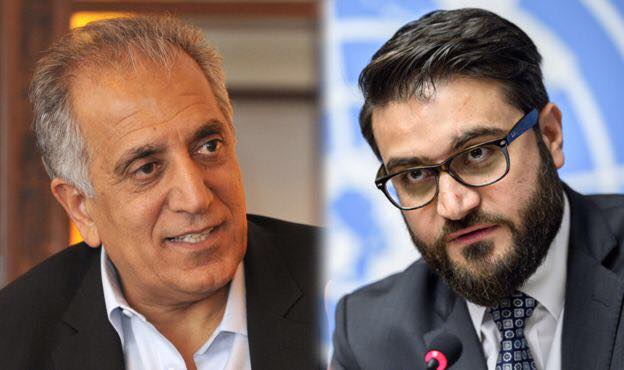 A few days ago on 23rd Hoot, 1397 [Solar year] in Washington, Hamdullah Mohib, national security advisor strongly criticized Zalmai Khalilzad, U.S. special representative for Afghanistan. He blamed Khalilzad for bypassing Afghan government in the peace process for his interests. However, the U.S. Department of State called such statements destructive for Kabul-Washington links and the peace negotiation process and thus summoned Hamdullah Mohib.

Regarding the issue, Reuters news agency by quoting some sources said that David Hale, U.S. secretary of state for political affairs had a telephonic conversation with president Ghani and has told that “Moheb will no longer be welcomed in Washington and the United States does not want to cooperate with him in Kabul and Washington.”

Hamdullah Moheb criticizes the U.S. stand in the peace process and blames Khalilzad’s ambitions in a time when the Afghan government has been excluded from the peace negotiation process and is unpleasant about the process

Here, we discuss the foreign policy of the unity government, the dysfunctional Kabul-Washington links and the future of relations between two sides.

Although the Kabul-Washington relations were extremely belligerent during the last years of Karzai’s presidency, reconciled with the establishment of the unity government and the Afghan-US bilateral security agreement was signed by Ghani within 24 hours of his inauguration of authority.

After the reconciliation of Kabul-Washington links, President Barak Obama changed the schedule of army pullout in 2016 and announced that 8400 soldiers would remain in 2017. The previous plan was to keep the 5500 soldiers after 2016.

The Kabul-Washington relations remained ambiguous during the first eight months of Trump’s presidency. Although the Afghan government was unaware and worried about the U.S. strategy for the future, the concerns reduced after the announcement of Trump’s war-oriented policy for Afghanistan and the government welcomed the strategy of the U.S.

The US-centered foreign policy of Afghan government caused the abolition of regional consensus. Similarly, the government became close to the United States to a state in which ignored and became silent about every crime of foreign forces after the announcement of the new strategy.

After the declaration of Trump’s strategy, airstrikes increased exceptionally, and airstrikes bombarded people’s houses, religious schools, mosques and even stations of Afghan security forces. Nonetheless, the Afghan government never expressed any reaction. However, when the United States chose the path of negotiations instead of war, the government voiced hostility about it. Thus, skepticism appeared in Kabul-Washington links.

Incredulity between Kabul and Washington

Due to change in U.S. strategy about the Afghan war and the alteration in United States’ decision to negotiate instead of fighting with the Taliban, the Kabul-Washington relations become hostile for the first time during the unity government.

President Ghani was expecting that the Taliban, just like Hezb-e-Islami, will negotiate with the government. Conversely, the Taliban started negotiation with the United States and bypassed the Afghan government. The government is thus, unpleased about the peace process.

The U.S. selected Zalmai Khalilzad as their representative for peace. He commenced negotiations with the Taliban and so far has conducted five official meetings with them. Ashraf Ghani at the beginning of the peace negotiation process said that “The United States’ ongoing efforts for peace are a part of Afghan government’s program for peace and will be negotiated under the Afghan government’s leadership.” However, when the rumors of agreement over the U.S. pullout spread, the concerns of the Afghan government also increased. President Ghani by sending a letter to the U.S. strived to prevent trump from the pullout. Later, he stated in an interview that no foreign side has permission to decide on peace in Afghanistan.

After Ghani’s statement, Hamdullah Moheb, Afghanistan’s NSA criticized Zalmai Khalilzad, U.S. special representative for Afghanistan and opposed the peace negotiation process during his talk with news reporters in Washington. He accused Khalilzad of bypassing Afghan government, taking legitimacy and giving it to the Taliban. Also, he blamed Khalilzad for striving to establish a temporary government in which he becomes the leader.

The future of Kabul-Washington relations

Peace with the Taliban is a vital and definitive issue for Afghanistan. The Afghan government as a strategic partner of the U.S. and as a government consider this as its right to know completely about the course of the process.

This is the first time when the relations between Kabul and Washington became hostile during the unity government.  Previously, the Kabul-Washington relations became hostile due to airstrikes, civilian casualty, and expansion of war during the last few years of Karzai’s presidency. This time, however, the causes of hostility are not airstrikes and civilian casualty, but other issues. Currently, Ghani has nominated himself for the presidential elections, and it seems like he fears losing power. Thus, he tries to specify his position in the peace negotiation process.

It is being said that the Taliban and the U.S. have reached an agreement on the issues of pullout and counterterrorism and will sign the agreement during their next meeting. If the deal is genuinely signed during their upcoming meeting and the Afghan government starts to feel solitary, the Kabul-Washington relations will worsen.