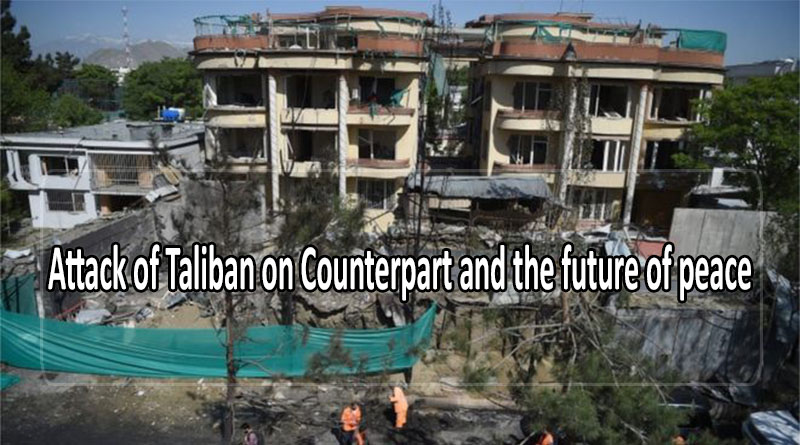 On 8th May 2019, after a group attack of Taliban, which included a bomber and four attackers on counterpart international in Shahr-e-Now Kabul Province, after six-hours fight and finally killed the attackers, 9 individuals including six soldiers were killed and 24 others injured, and most of them were civilians.

In the attack that civilians were most harmed. President Ghani, Abdullah Abdullah, chief executive, John Bass ambassador of the United States of America to Afghanistan and the Office of the United Nations Assistance Mission in Afghanistan (UNAMA) condemned the attack, the presidential palace in a statement, Described the operation as a “crime,” and insists that the Taliban should respond positively to the peace demands of the Afghan people, otherwise they will be suppressed by security forces and defenses.

The attack was carried out by Taliban, which concurred with the sixth peace talks between the Taliban and Zalmay Khalilzad, the United States Special Envoy for Peace in Doha, Qatar. Also, this attack happened only when the Peace Consultative Jirga in Kabul has just been completed. A huge gathering of more than three thousand Afghans for five days under the ceiling of the Loya Jirga Hall to talk about the end of the war and the consolidation of peace with the Taliban. In the recent jirga, President Ghani promised to discharge 175 Taliban prisoners as a generosity towards the Taliban and called for a ceasefire in the holy month of Ramadan.

Why attack on Counterpart?

Counterpart is a foreign organization which is sponsored by the United States Agency for International Development (USAID). Since 2005, it has been active in Afghanistan in the areas of women empowerment, Education of journalist’s and civil society strengthening in 34 provinces of Afghanistan. Approximately 200 employees were at the headquarters of the Organization. But in the newsletter of Taliban, the cause of the attack on this organization has been the occupation of this organization said. Of course, in the last 19 years of the Taliban’s strategy of attacking foreign organizations and institutions, they have been calling for their first-class goals, and have urged civilians to be away from foreign organizations and institutions. Earlier than this, in began 2019, the Green Village Camp which is military camp in 9th district of Kabul province was attacked by Taliban.

Although the US ambassador to Afghanistan, John Bass, called the Counterpart a civilian organization, and he has described the attack as an unwarranted violence, but the Taliban group does not differ significantly between foreign military and civilian targets, even though before this the activities of the Red Cross Which is an international entity, were also suspected of having committed “suspicious” activities.

War due to the superior success in peace talks

In the beginning of the year when the Afghan government announced the launch of military Operation with the name of Khalid, followed by the Taliban from the start of this year with the name of Al-Fatah operation, Political analysts have expressed concern and predicted a further deterioration of the country’s war situation this year. But the general public, with the description of the war declaration on both sides, had many hopes for the realization of peace. The direct talks between the Taliban in Qatar on the one hand and Taliban talks with representatives of the political and social movements of Afghanistan in Moscow on the other, and finally the formation of the Consultative Loya Jirga at the invitation of the President Ghani in Kabul, were all optimistic about the close peace, Played a role. But the acceleration of the Taliban’s top-level attacks on the one hand and the Taliban’s attacks on civilian targets, the latest example of which was the attack on the Counterpart in Shahr-e-now Kabul, showed that the path to peace in the country is far away. Unfortunately, each one around, both the Ashraf Ghani government and the Taliban movement are trying to bring peace to the battlefield, not on the negotiating table. While the historical experiences, on the contrary, indicate that the peace treaty also agreed that “War has no winner, and peace has no loser”, not through forcefulness and violence, but through forgiveness and acceptance of the other side, can and will end.

The Peace Consultative Jirga, which is passing only a week from its completion, not only didn’t strengthen the ongoing peace process, but also created a new bottle neck for peace efforts. Maybe the jirga’s organizers, before the intensification of immediate peace, thought of the survival of the current government and its durability, otherwise in the presence of such a huge gather, this deadlock should not have existed. Unfortunately, some of the provisions of the Jirga resolution, such as 11 and 14, reinforce this clause. As stated in provision 11, the inclusion of the addresses from the Afghan and on behalf of Afghan unity was implicitly granted to the Government of Afghanistan. It has nothing to do with the mere closing of the path to independent peace efforts that has been largely successful in the political, civil and political developments of the country, including former President Hamid Karzai. Provision 14 of the resolution also emphasizes the respect of the Government of Afghanistan in all efforts and initiatives taken on the part of the peace process. Emphasis on the principle of the centrality also means nothing but the submission of the opposite side and the unilateral acceptance of the conditions of the government. If it was possible to accept such an orientation for the armed opposition, then what is all this war for? Perhaps many years ago, during the time of the Ex-president Hamid Karzai, peace was being made, and the current war would not have been so long-lasting and complicated.

Unfortunately, a heavy indorses and privation of the Peace Consultative Jirga under the rule of national unity government in order to consolidate peace, and the nation has to sacrifice more youth for the survival of a failed government. In Each way the peace process has reached a deadlock, both sides (government and Taliban) have been striving to stabilize their position in the peace process through the encounter, where we can mention the attack on counterpart.  Which is the interpretation of the same.

The need for re-establishing mediation

One of the key issues for peace-building in Afghanistan is the activation of a third-party, where that must has somehow shared the language with each other and can speak with them without a veil. This reference must be capable of being able, in a mediating manner, through dialogue and durable negotiations with the parties to finally bring them to the negotiating table in the context of the conflict and the final resolution of all the above cases. This reference point was developed somewhere before and after the Moscow Peace Conference, and if it had not been converted into a mixed group of two hundred and fifty, it would undoubtedly have gained more strength.

Still it’s the right time, beforehand the Taliban attacks against what is under the aegis of the government and the government’s attacks on the Taliban, and the youth are being sacrificed. So it’s the time for the national unity government to release the independent efforts of the peace as before, independently and with the competence of peace talks with the Taliban. Otherwise, the burden will last longer on the shoulders of us.

In the hope of ending the war and consolidating urgent peace in the country.