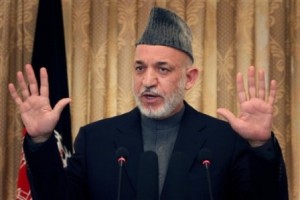 Afghanistan in the previous week

We have witnessed several key incidents. Karzai’s recent remarks about the peace initiatives; calling the talks through channels other than the Peace Council a conspiracy and would prevent such an initiative, has met with diverse reactions and criticisms. The analysts are of the view that after the Paris conference in which there was relative consensus on number of important issues became a base for the opposition who felt that they can reach at some point with Taliban on several issues (such as form of Government). Based on this, Mr. Karzai and Afghan Government is to a great extent concerned, and want the process be at the control of the government.

For Strategic and Regional Studies to keep various institutions and authorities accurately and timely aware of the current political, economic and social news and analysis.

Hamid Karzai: Talks other than Peace Council channel is Plot!

President Hamid Karzai says: “Foreigners are plotting to seize the Afghan peace process for their own interests”. He expressed that his government is aware of such attempts and would fight against it. Last Tuesday, President Karzai warned that any attempt of peace with Taliban should be carried forward only through High

Peace Council. He urged all politicians and influential figures to abstain from such peace talks. He says that foreign forces have contacted numerous influential politicians, urging them to get involved in peace efforts held by players other than High Peace Council. We asked Mr. Ahmad Zia Rahimzai who is an author, journalist and Assistant to Jamiat-e-Eslah’s publications and broadcasts, to share his opinion on this regard. According to him, “Karzai’s recent remarks about the peace process and plots behind it, is playing with the Afghan people’s emotions and sentiments on one hand and on the other hand shows the dishonesty and ambivalence of the government and its foreign friends towards the issue.

For a long period of time, conflicting views are shown through the media sources about the negotiation with the militants and the peace process. In this regard, government’s attempt for establishing High Peace Council and the announcement of informal talks between US and Militant Taliban who are known as the largest militant opposition to the government in Qatar, apparently displayed some signs of hope that the both conflicting parties would stop violence and bloodshed and bring peace to country.

But unfortunately with the passage of time, all hopes and optimism in the hearts and minds of the people about bringing peace to the country is replaced with disparity and disappointment, has more saddened and wounded the conflict ridden and homeless people of Afghanistan.

Since many rounds of formal and indirect talks between the Government, US, Political Parties and two major militant opposition groups Hizb-e-Islami and Taliban has passed. The recent remarks of the president Karzai shows distress and disappointment to the peace process which rightly can be said is a bad news for afghan people.

Revising how the process of peace negotiations carried out in previous years and how parties got involved and played their roles, in my opinion is a repeated theme and beyond the scope of this topic. But the recent remarks about foiling the plots is very amusing.

Over the years, all the people of Afghanistan witnessed that the Karzai’s administration and his political allies could not take any step on any issue against the will of their foreign friends.

The Karzai’s administration never had any particular policy about the peace process, until the foreign forces plagued with huge losses in the battle ground against the militants. The first strong initiative was taken by the United States for the negotiations with militant oppositions.

Now, as the contacts between the political opposition of Karzai and Militants is increasing, particularly after the Paris meeting in the month of December last year, with the participation of number of members of National Front, right and justice party, civil society representatives and militants was held. The Government of Karzai is concerned for fear that their government become marginalized.

Political Analysts are of the view that, though the Afghan political groups of different sides who participated in the peace negotiations but they don’t have any particular plan for the stability and peace in the country, rather everyone is at the pursuit of political gains. Despite this, the peace negotiations between various Afghan factions are considered a part trust building among Afghans. They would be able to understand each other’s positions and will effectively contribute to the future of Afghanistan.

Of course, if the factions and political parties in the discussions think that they are representing an ethnicity or area and similarly, considering the opposition as representative of an ethnicity or an area, without doubt, the negotiations will not give a tangible result, rather would provoke ethnic and regional conflicts, which make the situation worse.

However, on the recent remarks of the president Karzai, the Political analysts are of the view that the dispersed efforts for peace are the conspiracies by the foreigners to weaken Afghanistan. They believe that if we agree on plots, the Afghan government is too weak to take stand against such attempts.

These analysts are also of the view that the president Karzai’s call and assertion for the exclusive control of the peace talks in the hand of High Peace Council, indicates that Karzai’s team efforts to retain the current government’s power and are willing to have all the issues be at one group’s hand.

Participation of all sides and political factions in the peace process is considered essential, the analysts believe. Due to the non-participation of all factions and parties involved in Afghanistan the harms and losses during the eleven years since the Bon conference took place in 2001 till today is obvious.

Karzai’s remarks which states: “In recent trip to United States, the US administration stressed that they will not fight Taliban after 2014. Afghanistan accepted this and mentioned that years ago, Afghanistan had such mandate”, explains that US and its allies have mostly has taken such initiatives, if the Karzai’s recent remarks about plots is true that foreigners are involved, The Afghan government cannot stop these plots. Similarly, Sir Waheed Mujhdah a political expert commented on this regard: “After the Paris talks, Mr. Karzai has taken anti-negotiation stand. For the reason, he believes, that the political opposition and representatives of Taliban found opportunity to exchange their views about important issues of Afghanistan. In this meeting six important themes were pointed out which all the parties were almost agree upon that could reach to a deal after the talk is carried on.

The first theme was the constitution of Afghanistan, which all of the sides were agreed in case if necessary adjustments could be made. But the difference was that Taliban wanted to rewrite the US-made-constitution, while the other side emphasized on reforms.

Other issue which was discussed was the occupation of Afghanistan. In Taliban’s view main reason for war in Afghanistan is occupation, while the other side viewed war as reason for occupation. At least there were agreement that the war should be ended.

Other issue was the Afghanistan as an Islamic State should be ruled by Sharia law which no one was against it. However, the difference was on that the Taliban’s interpretation of sharia which was focused on minor issues than major ones.

Establishing provisional government was another issue discussed, the political opposition also believed that Karzai should step down and provisional government be installed and elections should be carried out. They also insisted upon need of law in Afghanistan and the national army, national security and national police be founded but should be headed by the trusted personalities to whom whole nation trust and should not represent an ethnicity or faction. As a result, the political opposition found out the demands of Taliban and the form of government they want, thus, they arrived to some point that they can reach some deal with Taliban.

Therefore, Mr. Karzai is to a great extent concerned of the situation, particularly the about the reports that Taliban want to talk to political opposition of Karzai. Thus, Karzai stated that no one can negotiate with militants fighting the government except the government itself. His political rival Mr. Abdullah Abdullah has expressed his disagreement and said in one of his speech: “the government wants everything be under its exclusive control, but we will not allow them. Peace is national process thus everyone should be involved in it.