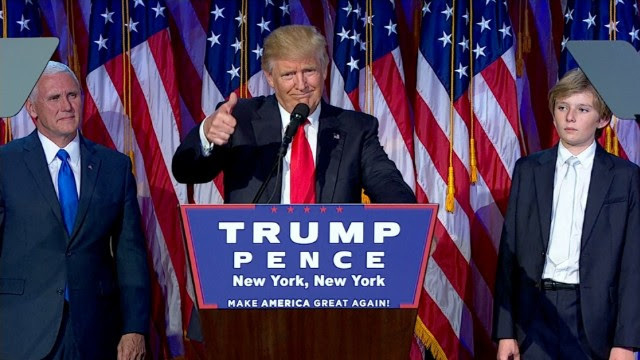 Republican candidate for the US Presidential Elections Donald Trump won victory, defeated his rival Hillary Clinton (predicted to be a winner in elections), and became the 45th President of the United States.

Prior to elections, due to his various remarks, particularly his remarks about women, in many opinion polls Donald Trump was behind Hillary Clinton; but still he dramatically won the elections and surprised both the world and Americans.

Trump’s victory resulted in stock market’s tumble and some anti-trump protests erupt within the United States.

What are the reasons behind the failure of Hillary Clinton? What are the views of the President-elect of the United States regarding hot issues? And in particular what will he do different in the region and Afghanistan? These are questions that are analyzed here.

The followings are the main reasons behind the loss of Clinton and winning of Trump:

Third; The reemergence of Nationalistic thoughts: currently the world and the west in particular are headed towards anti-globalization and nationalistic opinions. For instance Brexit (which, to a greater extent, was due the efforts of Boris Johnson who is currently UK’s Foreign Secretary and is known for his nationalistic views), anti-migrant opinions in Europe and Putin’s increased popularity in Russia also influenced the United States. Besides that, there were some other issues in the United States, which paved the way for such nationalistic opinions of whites and Americans in general.

Fourth; investigation of Hillary Clinton’s emails by FBI: during her service as Secretary of States, Hillary Clinton had used her personal email for government affairs. The issue was once investigated by Federal Bureau of Investigation (FBI); but during the campaigns, once again, this issue was raised by the head of this bureau which influenced the decision of voters.

Although Trump is a new player in politics and has previously worked in business-oriented fields and it is hence hard to predict his policy agenda; but still we will look into opinions and remarks that he has made during his election campaign and in a recent few years about a variety of issues.

Migrants: Trump is highly criticized for his remarks on migrants within the United States. About the migrants, he had said that he would deport 11 million undocumented migrants, who are currently in the United States; he would build 1000 miles long wall across the US border with Mexico. He has also said that he would ban the intake of Syrian migrants and would deport the existing Syrian Migrants and he would temporarily suspend the migration from the countries that have a history of exporting “terrorism”.

ISIS in Iraq and Syria: first Donald Trump had suggested to the United States should wait the conflict in Syria and then fight the remnants of Bashar ul Asad or Islamic State. However, after bloody incidents of Paris, he said that he would take tough measures against ISIS so that this group would not be able to recruit through Internet. During his campaign, Trump said that “we have no choice but to eliminate ISIS”; Trump also supported deploying American soldiers in other country in order to suppress ISIS.

Saudi Arabia and Iran: Trump’s expressions about Saudi Arabia and Iran are also contrary to Obama’s policies. Trump demanded to double and triple the sanctions on Iran because, he believes, Iran was the biggest supporter of “terrorism”. It was due to Trump’s these comments, while congratulating Trump on his presidency, Iranian Foreign Minister demanded to remain committed to international regulations and signed agreements. Trump had also threatened to stop buying Saudi Arabia’s oil in case Saudi troops did not take part in suppression of ISIS.

China and Russia: Trump has widely spoken against China (than against Russia) mostly in regards to the US-China trade relations. He criticized China for lowering the value of its currency (Yuan); because it is due to the devaluation of Chinese currency, the United States has suffered losses in bilateral trade. He has also accused China of stealing the US intellectual properties and pledged to prove these accusations. He said that he would instruct the US trade representatives and the World Trade Organization (WTO) to bring trade cases against China. On the other hand, the US owes great amounts of money in debt from China and in this regard Trump has said that he would decrease these and other national debts and he would increase the US military presence in Asia-Pacific so that the US get upper hand when dealing with China.

Trump wants to form a new coalition with Russia in order to “reduce disagreements” with this country. After Trump’s victory in the elections, Putin congratulated him and expressed hope that Moscow and Washington would work together to improve relations so that these joint efforts would have positive consequences to the tackle world’s security threats.

Since 2004, this was the first time that Afghanistan’s issue was neglected during election campaigns. There are several reasons for that, first issues such as ISIS, Syria, migrants, Russia, China, terrorism, “terrorist” attacks that occurred in the United States and the US internal situation were considered more significant than Afghanistan. Second; now after 15 years, the Afghanistan case is as it was in 2001. Since the republicans had started this war and later in two subsequent periods democrats failed to resolve it, both sides tried not to raise this issue.

However, since 2012, Donald Trump had several remarks about Afghanistan. For instance, in 2012, Trump had said that he would pull out all its troops from Afghanistan. In 2013, when a number of US soldiers were killed by some Afghan soldiers Trump reacted and said: “let’s withdraw from Afghanistan; our soldiers are killed by those Afghans that we have trained. We wasted millions of dollars there, it is inacceptable.”[3]

Later-on, Trump changed his opinion and demanded to keep the 9800 US soldiers in Afghanistan; because, now he said, the US presence in Afghanistan is also necessary for Pakistan. In addition, in 2015, Trump said that the US’s ongoing war in Afghanistan was not a mistake.

Generally, in all countries, policies during power are different from the stances made during electoral campaigns. Many candidates, in order to attract voters, make great promises during campaigns but, to a greater extent, they do not fulfill these promises. Therefore, these tough expressions of Trump may also face the same fate. In the meanwhile, Trump that has not had political experience before this, entering the US bureaucracy and Presidential system, would not be able to make those revolutionary decisions that he had pledged to make during his electoral campaigns.

In his victory speech, Donald Trump briefly raised foreign policy and said: “we will get along with all other nations willing to get along with us. We will have great relationships. We will seek common ground, not hostility; partnership, not conflict.”[4]

However, Donald Trump’s policies regarding Russia, China and Islamic world will be different than those of its predecessors and would be, to some extent, close to what he has promised during his campaigns.

In our respective region, Trump would establish better relations with India compared to Pakistan. Hindu residents in the United States had campaigned for Trump and he had once participated in these campaigns. If the United States did not undertake tougher stance against Pakistan it would at least do not soften its current stance. It is the reason why the US Ambassador in Pakistan has said that, the US’s policy towards Pakistan would not change with Trump coming to power.

Afghanistan can be affected by the US future policies if decisions are taken in the following two areas:

Second; the US economic aids to Afghanistan: the Afghan government would mostly be concerned about the US financial aids. The United States may link its financial aids with tougher conditions in the future.

[3] Jafar Haand, What Trump has said about Afghanistan, VOA, see it online: http://www.pashtovoa.com/a/donald-trump-remarks-on-afghanistan/3282242.html