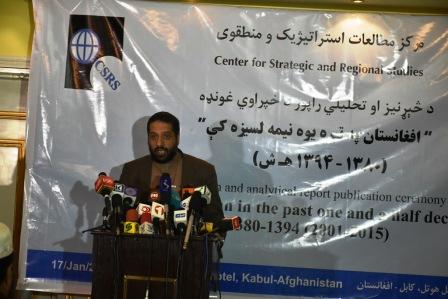 Events & Updates
January 21, 2017January 22, 2017 CsrsAdmin 234 Views 0 Comments slideshow, The “Afghanistan in the past one and a half-decade” press conference report, ticker

The outcomes and the summary of the research and analytical report of “Afghanistan in the past one and a half decade, prepared by the Center for Strategic and Regional Studies (CSRS), was released on Tuesday, Jan 17, 2017 in a press conference in Intercontinental Hotel, Kabul.

The report, prepared in 400 pages, has comprehensively studied the situation of the key sectors in the past fifteen years in Afghanistan. It includes the peace, foreign policy, corruption, migrants and internally displaced people, economy (national economy, trade, energy, industry and agriculture), security and crimes, education and higher education sectors. Researchers in CSRS have used both qualitative and quantitative methods in this report and a survey, conducted in the six major cities of the country, is also included in the report.

In this press conference where national and international media were invited, first the Director General of CSRS Dr. Abdul Baqi Amin, stressing on the significance of the research centers (think-tanks), shed light on the outcomes of the report and then Hekmatullah Zaland and Ahmad Bilal Khalil, the researches and writers of the report, presented the outcomes and findings of the report.

During his speech, Dr. Abdul Baqi Amin emphasized on the importance of such a report that has analyzed and evaluated the possibilities and opportunities in the country to reform and promote policies. Representatives of the media and other participants

Mr. Amin said, “Paving the way for the development of the research centers is a necessity, but unfortunately there exist no national program, based on which the research centers could describe and present the situation in the country to the public and generally their programs are influenced by the donor institutions, which would not be in the interests of the country; therefore, the government must promote research centers so that these centers be able to fulfill their national duty in terms of evaluating the activities of the government and reforming policies.”

According to Mr. Amin, the report was not funded by any internal or foreign institution and in terms of financial support it totally relied on the internal resources of the center and therefore, has tried to realistically and impartially present the situation of the country.

He said that the report was not only the outcomes of a survey but also an analysis of the first hand and second hand information.

Dr. Amin added, “The report has studied seven key sectors and about peace the findings of the report shows that war is not the remedy and the Afghans cannot resolve their issue through war, therefore, peace and negotiation is the only way out of the current stalemate in Afghanistan.”

Mentioning the findings of the survey which is part of the report, Mr. Amin said, “62% of the interviewees believed that the NUG did not make sincere efforts to maintain peace in Afghanistan, 68% mentioned foreigners’ intervention as the main obstacle in the way of peace in Afghanistan. 66% of the participants of the survey have said that, HPC did not play a positive role and 65% of the people have said that an impartial Afghan mediator group is the only mean, through which fruitful dialogue for peace can be conducted.”

He said, 87% of the participants of the survey have said that Afghanistan pursued an imbalanced foreign policy towards rival countries, particularly the neighboring countries. And the report has concluded that the government does not have a defined basic lines of foreign policy approved by the parliament; and CSRS has recommended to the government to held serious steps to define the basic lines of its foreign policy. He also said that the NUG has made some miscalculations in regard to its foreign policy, for instance, the government signed the Bilateral Security Agreement (BSA) with the US to maintain security in the country while after its signature, insecurity increased and security was not maintained in the country. Moreover, the government also made some miscalculations in relations with Pakistan and in the issue of Yemen and Saudi Arabia and did not achieve its purposes in relations with these countries. In terms of security, the outcome of the survey shows that security is deteriorating in the country and Afghans do not feel themselves safe in their own country. 58% of the people have said that they do not feel safe. In regards to education sector, although there are some developments but, in this regard, there are also some challenges such as low quality of educative institutions, lack of professional and expert cadres, sub-standard evaluation programs, and lack of transparent exams. According to Mr. Amin, in regards to the higher education, scientific researches are not appropriately conducted in higher education institutions.

The main researcher of the report Ahmad Bilal Khalil talked about the significance and methodology of the report. He said that no research had been conducted in the past 15 year which has included the past 15 years and the key sectors in the country. He said that the report was prepared using both qualitative and quantitative research methods as in regards to quality, seminars and meetings were held and experts were interviewed and in regards to the quantity, a survey was conducted in six major cities of the country in which 701 people had participated most of which were educated people and university lecturers. Mr. Khalil said that accurate sources were used in order to prepare the report. The main researcher of the report Ahmad Bilal Khalil

Another researcher of the report Hekmatullah Zaland described all the seven sections of the report and said that this report have reached to significant conclusions in all aspects, for instance in regards to the peace process, the report has pointed out the obstacles on the way of High Peace Council (HPC) and have mentioned lack of authority and independence, lack of coordination between its members,  lack of a defined mechanism and policy, taking advantage of the posts in this council as political bribe, and the issue of concept of peace as the main obstacles in the way of this council’s success. In the meanwhile, a member of HPC Mawlawi Shahzada Shahid, who had participated in this conference, confirming the findings of this report, said to the media that HPC had lesser achievements than it was expected to have.

Mr. Zaland added that although the regional aspects of the peace in Afghanistan was important but peace in this country could not be maintained through foreign policy that was why the Quadrilateral Coordination Groups failed in their effort in this regard. He added that the uncoordinated foreign policy of the NUG is also discussed in this report. Mr. Zaland said that corruption was one of the major challenges for Afghans in the past 15 years and have resulted in violation of the Afghans’ human rights. He also said that foreigners were also involved in corruption in Afghanistan. He said that most of the participants in CSRS’s survey did not have confidence in the NUG’s efforts against corruption and 44.58% of the people believed that corruption has increased under the NUG, compared to the previous government.

Mohammad Zubair Shafiqi a political analyst and the director in charge of Wissa daily, who studied the report, said that it was a major work and that until now neither government organs nor private organs were able to prepare such a report and this report was the first of its kind in the country.

He said that the report has a credible chronology and events in the past 15 year are mentioned exactly as they had occurred. He added that the report can be a good source for writers and researchers and that the contents of the report are prepared in an impartial and balanced manner.

He also said that the survey, which is included in this report, really presented people’s opinions.

Although, various institutions release their reports and surveys on the situation in Afghanistan annually, but the characteristic of this report is that it includes several sectors and the past 15 years. The report includes a background of the above mentioned sectors, their situation after 1380 (2000) and has put more focus on 1394 (2015-2016). In addition, besides developments, failures and challenges in various sectors, the recommendations of CSRS are also included in this report.