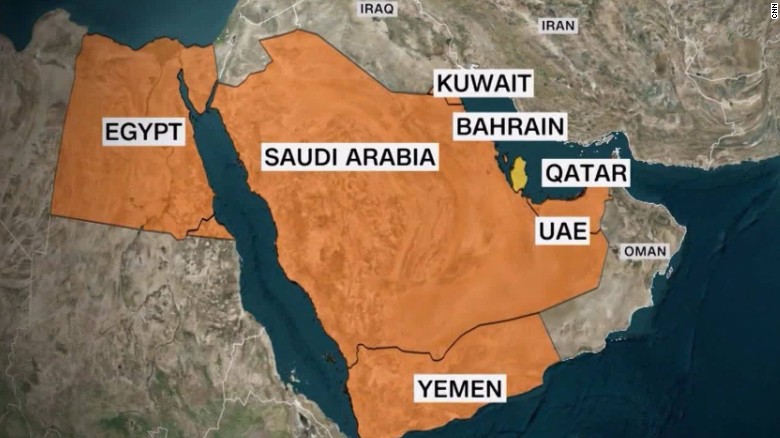 At the beginning of June 2017, the Persian Gulf witnessed the most unprecedented diplomatic crisis ever. The crisis emerged when Saudi Arabia, Bahrain, Egypt and United Arab Emirate one after another and within ten minutes cut their diplomatic ties with Qatar. These countries withdrew all their diplomatic staff and also ejected Qatari Ambassadors and citizens from their respective countries. Besides severing political ties, these countries also cut their economic ties and sea and airline traffic with the country and also closed their borders with Qatar.

This political crisis in relations with Qatar is not limited to the Persian Gulf, but it is spread in the Middle East. In other words, the crisis is now internationalized, and therefore various countries have demanded the settlement of the issue through negotiations. From Kuwait and Turkey to the UN, many players are demanding to play the role of mediator to resolve the crisis.

Why the crisis in the Persian Gulf emerged? What is the current situation? What are the probable consequences and impacts? These are the questions that are analyzed here.

The Middle East in international politics

Since the emerge of Islam, the Middle East is not only giving birth to the events but also has had a great impact on the Islamic countries. After a brief review of the past hundred years’ history of the region, one can say that the Middle East is a complicated region at international level and besides Islamic world and regional countries; most of the times; some super powers have also been engaged in this region.

Currently, the Middle East importance in international politics is due to the following factors:

These factors along with some other factors have added to the importance of the region as well as attracted attentions.

The complex rivalries in the Middle East

In Middle East, the interests of countries at international, regional and state levels confront each other and, therefore, this region is a complicated one.

The countries’ regional interests, strategic influence in the region, rivalry over leadership and religious oppositions are factors behind these rivalries in the Middle East.

Why did the Gulf crisis emerge?

Although it is not the first time that a number of Gulf countries cut ties with Qatar, before this in 2002, Saudi Arabia had withdrawn its Ambassador in reaction to the broadcasts of the Qatar-based Aljazeera TV station. In 2008, once again, the diplomatic relations between the two countries became improved, but  in 2014, once again, the Saudi Arabia, Bahrain and the United Arab Emirates severed their ties with Qatar. There are two categories of factors that played a role in the emergence of the current crisis in the Middle East: first, surficial and evident factors; second, behind-the-scene factors.

Surficial and evident factors: seemingly, the crisis emerged in April 2017, the Qatari government reached an agreement with some Shiite and Sunnite armed groups in Iraq. Based on the agreement, these militant groups have released 26 Qatari prisoners including members of the Qatari Royal family after 16 months and in exchange, based on the reports of Financial Times, Qatar has given $700m to the Pro-Iranian armed groups[1]. This situation may have ignited Saudi’s wrath; but according to the Iraqi President, this money is still in Iraq’s Central Bank and is not given to the armed groups.

The second reason was the Riyadh Conference in Saudi Arabia which had three parts: “the Gulf Cooperation Council and the US”; “Arab World and the US”; and “the Islamic World, the Arab World, and the US”. The US president Donald Trump had also participated in this conference. It is said that Saudi Arabia has decided to act against Qatar after getting Trump’s support. That is why Trump then wrote on his Twitter: “During my recent trip to the Middle East I stated that there could no longer be funding of Radical Ideology. Leaders pointed to Qatar—look!”

Therefore, after severing diplomatic ties with Qatar, Saudi Arabia released the list of the organizations and individuals whom Qatar had helped including the name of the Islamic World’s religious scholar and Mujtahid and a great moderate scholar Youssef Qardawi.

Third, the crisis occurred due to some hacks. First, the Qatari government’s news agency was hacked by some unknown individuals and the Qatari Amir Sheikh Tamim bin Hamad Al Thani’s unsaid remarks were released. Quoting the Qatari Amir the web page wrote: “Iran is a regional and Islamic power, which cannot be ignored and it is unjust to stand against it. It is a significant and major power in the stability of the region.”

Its impacts on Qatar and the region

New coalitions; although in the short-term, the current diplomatic crisis will not give birth to the new alliances in the region, however, if the crisis continued, there is this probability. The current crisis will bring Turkey and Iran closer to Qatar. Overall, the crises in the Middle East is in the best interests of Russia and Iran. Therefore, using the current opportunity, while Qatar is economically sanctioned by Arab countries, Iran is sending food to Qatar in an effort to increase its soft power in this country. Although after King Salman had seized power, relations between Turkey and Saudi Arabia were improved, in the current crisis Turkey is in favor of Qatar. That is why the Turkish President Recep Tayyip Erdogan repeatedly stated that Qatar’s economic blockade in the Ramadan month was in violation of Islamic values.

Energy security: Qatar is at the head of “LPG” gas producers in the world. Although many believe that the current crisis will not affect the oil and gas prices, if the crisis prolonged, it is likely to affect the oil and gas markets. This situation will put an impact on both Qatar and the countries that import gas from this country.

Economic impacts on Qatar: the anti-Qatari movement is not limited to severing diplomatic ties only, but also cutting the economic ties is an important part of it. Qatar, which was importing most of its food staff from these Arabic countries particularly the Saudi Arabia, is now sanctioned. Although due to Iran, Turkey and some other countries’ assistance, the situation has not become very tenuous; it will have major consequences for Qatar if the crisis continued for a longer period of time. In the meanwhile, Saudi Arabia, Egypt, and UAE have cut their airline traffic with Qatar, and Qatari airplane is taking the air paths of other countries to travel to the Africa, Europe and the US which will increase the expenditure to Qatari airplanes.

Humanitarian crisis: the ejection of Qatari citizens from several Arab Countries for three days up to 14 days and even not allowing them for Umra Pilgrimages as well as preventing Qataris from going to the Maka city would ignite people’s wrath.

Islamists and its affiliated groups: the Islamists will also be affected if Qatar signed a deal with some Arab countries headed by Saudi Arabia about them. However, given the remarks of Qatari Minister of Foreign Affairs and officials the probability of such a deal is very low.