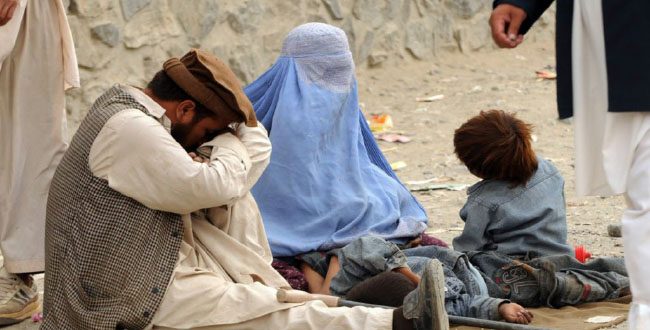 Afghanistan is country where intense security condition, war and natural disasters have made people’s lives difficult in different ways. Poverty and unemployment are among the causes of unstable political condition and insecurity in last four decades and its rate is currently higher compared to any other time.

According to the recent report of central statistics organization of Afghanistan, 51.7 percent of People in Afghanistan comprehensively lives in poverty.  The organization published their findings in a report with the support of World Bank, Oxford University and United Nations children’s funds box on 11th of Hamal, 1398[Solar].

Based on the report, poverty rate is 18% in cities and 61% in rural areas of Afghanistan. In addition, poverty among Kochi people is reported 89%. Overall, lowest multidimensional poverty rate belongs to Kabul which is 15% and the highest rate is 85% of Badghis province.

Living condition, poverty and unemployment rates and causes of growth in these rates during last few years are issues that are going to discuss here.

Afghanistan is a landlocked country with poor economy where most of its people are busy in agricultural activities and obtain income from their agricultural products. However, war, insecurity and natural disasters have shaded the agricultural sector.

After the USSR transgression and continuity of war for four decades, besides deaths and injuries of millions of Afghans, millions were forced to abandon their country. They lost their wealth and their agricultural lands turned into deserts. Overall, these conditions quickly increased the unemployment and poverty rates in Afghanistan.

A new government was established with the attack of the U.S. and the fall of the Taliban’s regime. Although millions of dollars were spent after the establishment of new government and development was witnessed in some sectors, but during the last 18 years overall, steps weren’t taken to improve the condition of Afghanistan by permanently enhancing economy and employment level for the people of Afghanistan.

As the World Bank has reported, the poverty and unemployment rates during last 18 years in Afghanistan have not only reduced compared to the world, but has increased, considering the living conditions of the people.

The recent report regarding multidimensional poverty of Afghanistan published by the central statistics organization is the first report ever published since 18 years. Report which were previously published regarding poverty were reported by considering only the income rate of individuals in the community. However, the latest report has considered various dimensions and has discovered many causes of poverty in Afghanistan.

The report by the central Statistics organization has evaluated the living condition of Afghans considering five dimensions (Health, education, living standards, occupation and effect of security on life) and 18 indicators ( food safety, birth with the help of skilled medical professionals, existence of school, education for girls, education for boys, access to water, access to sewage system, access to electricity, access to burnable materials for cooking, residence, ownership of wealth and agriculture, relationship, unemployment, lack of employment, inability of inclusion in workforce, higher education and training, production, income and security).

Based on the recent of findings of Central statistics organization, more than half of Afghanistan’s population is facing multidimensional poverty, considering the mentioned indicators. In addition, the report states that 24% of workforce in Afghanistan is unemployed. 41.3% of the people consumes solid inflammable resources which carries risks of respiratory diseases. Moreover, among 32.2% of families, only one person works who is responsible for 6 family members.

Additionally, the report states that among 39.1% families, children do not go to school when they have age of school. 47.9 of families does not have educated women above 10 year. Moreover, the report says that 24.8% of people have experience security shocks and have not yet ameliorated.

Causes of the Grievous Condition of Afghans

War: insecurity and ongoing war are among the main causes which has affected the lives of people and has triggered poverty and unemployment crisis. Currently, around half of Afghanistan’s land is under militants’ controls. The geography of war has expanded. Civilian casualties in airstrikes have increased as the Afghan war had 10993 civilian casualty solely 2018. In addition, thousands of families abandoned their hometowns due to war and insecurity, lost their wealth and occupations and currently lives in bitter conditions.

Besides escape of investors from Afghanistan due to war and intense insecurity, ways to spend ministries budgets have also been restricted. Therefore, absence of investment on infrastructure has led incapability to absorb workforce and has caused unemployment and poverty crisis.

Natural disasters: Besides war, natural disasters such as aridity, floods and avalanches are among the factors of unemployment and poverty rates and have caused plenty of financial and thousands of human losses for the people of Afghanistan.

According the statistics published in April, 2019 by UN’s office of coordination of humanitarian affairs (OCHA), around 80 people were killed and 42 thousands became homeless due to recent floods in Afghanistan. In addition, people of southern areas of the country bore financial and human losses because of floods in March of the current year and based on reports of state minister for disaster management, around 50 were killed and 140 were injured due to floods. In addition, 926 houses were demolished completely and two thousand were devastated partially by the floods.

Considering the geographical position of Afghanistan and its mineral resources and capacity, plans and policies can be made for creating job opportunities and reduction of poverty and unemployment.

In addition, improvement and living condition and rise of employment opportunities have direct relationship with the development of manufacturing sector. Manufacturing sector is considered to be the main factor of the economies of countries and has a key role in economic development and reduction of unemployment and poverty. However, the government does not have any remarkable achievements in this sector and continuity of war is considered be its cause.

The war has been preventing economic development of Afghan since 18 years and has attracted government’s attention. Considering the condition, it can be said that combat with poverty and unemployment alike other issues is related to peace and security of the country. This means that, until true peace happens and an authoritative regime establishes, the economic problems will keep growing.