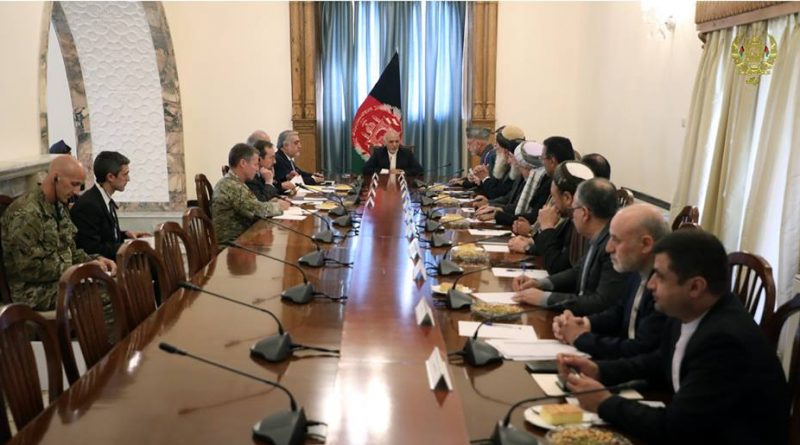 After the fifth meeting between the U.S. and the Taliban, Zalmai Khalilzad traveled to Kabul a few days ago in order to discuss peace with the government officials and Afghan politicians. He had meetings with a number of government officials, politicians, Jihadi leaders, Afghan women, youths and civil activists.

During his travel to Afghanistan, Khalilzad in his discussion with BBC said “The first five stages of ongoing peace negotiations for Afghan peace were related solely to the Taliban and the United States. However, any other issues will be discuss in presence of the Afghan government. A plan should be made, the involved sides should reach an agreement according that plan and announce ceasefire”

Zalmai Khalilzad emphasizes on intra-Afghan peace talks in a time when the second meeting between the Taliban and Afghan politicians will be held on 14th and 15th of April, 2019, subsequent to the Moscow meeting. On the other hand, President Ghani has also started discussions with some famous Afghan politicians and Jihadi leaders including the ex-Afghan president.

What are the standpoints of the United States, Afghan government and the Taliban about peace? How can the Afghans start to have a unified stand in order for intra-Afghan to begin? These issues are discussed here.

What Type of Peace Does Ghani Want?

Meanwhile, the Afghan government’s displeasure concerning the US-Taliban talks and Taliban’s meeting with Afghan politicians, Jihadi leaders and civil activists indicates that Ghani’s peace struggles are not for a true and sustainable peace, but an insight to his electoral politics will show that staying in power is first priority for Ghani, not peace.

In the ongoing Afghan peace negotiations between the Taliban and the United States, the Taliban emphasize on agreement over the U.S. pullout first of all. Although both sides met five times yet, but media has published reports which stated that the Taliban and the U.S. along with pullout, has discussed intra-Afghan talks, ceasefire and interim government. However, the Taliban have always refused such reports.

The Moscow meeting between the Taliban and Afghan politicians and Jihadi leaders was the first step toward intra-Afghan talks.

Washington and the Afghan Peace

The U.S. is a main and key side of the current war who decided to step out of the war after 18 years. Thus, started negotiations with the Taliban six months ago.

The first stage of face-to-face negotiations were to end the current war in Afghanistan. After the fifth meeting, it is being said that they both have generally agreed on and will sign the agreement during next meeting about two issues; the U.S. pullout and not using Afghan land against other.

During his recent travel to Afghanistan, Zalmai Khalilzad regarding the Afghan peace said that the issues discussed in previous US-Taliban meetings were only related to the Taliban and the United States. From now on however, the presence of Afghan government in the remaining discussions is vital. In addition, he said that the role of United States will reduce in the future and Afghan have to take more responsibilities.

Khalilzad’s statements apparently indicates that the U.S. and the Taliban have reached a general agreement and the U.S. currently strive to pressure the Taliban to negotiate with the Afghan government.

Although standpoints of the Taliban and Afghan government regarding intra-Afghan talks are sufficiently divergent, but both sides need to consider the current negotiation process as a historic opportunity and take advantage of the opportunity to end the 40-year war and bring peace and better future for the country.

The Taliban and the Afghan government has enough experience of conditions after the USSR pullout. Based on the experience, it is inappropriate to lose the opportunity for the attainment of power and fulfilling their desires.

The question however is, what is the solution for this issue? Firstly, alike struggles of the U.S. and regional countries for the commencement and success of US-Taliban talks, struggles should be made for the success of intra-Afghan negotiations.

Additionally, it is necessary for the Taliban and Afghan government to incline regarding the intra-Afghan talks. They have to struggle for an honest nation-centered peace.

Overall, after the US-Taliban talks, it is would be upright to commence three-sided talks between Afghan government, Afghan politicians and Jihadi leaders, and the Taliban under the supervision of internationals. The international community honestly needs to strive for the success of the negotiations in order for the future regime to be a comprehensive and a joint government.