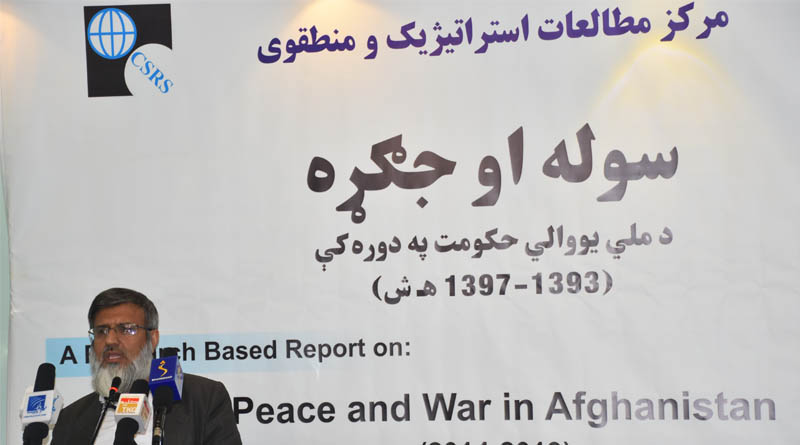 Center for strategic and regional studies shared the findings of “peace and war during the unity government” report with the press through a meeting on 29th Hamal 1398[solar].

During the conference, Mr. Naseer Ahmad Naveedi, general director of the center said: the report is analytical and research based and primary and secondary sources have been utilized to analyze the consequences of 5-year war strategies of involved sides during the unity government. The general outcome of the report is that all of the involved sides have had part in the current crisis in the country.  Mr. Navidi said that the center hopes to have contributed to the recent efforts for peace through the report. Mr Hekmatullah Zaland unfolded the summary of the report and shared the total casualties of civilians, military personnel and the opposing parties during the unity government in details with the media. Dr. Omar Zakhilwal, former minister of finance and a member of Moscow summit welcomed the research-based report of the center during his speech and said that the viewpoints of people via firsthand information are crucial for policy-making. Mr. Zakhilwal said that the surveys of the report indicate that foreign forces are the main cause of insecurity in Afghanistan and people are unpleased regarding the efforts of the government for peace. He emphasized that the foreign forces pullout should be a responsible step and should occur with peace. Efforts should be made for the security, sustenance and development of the government and establishments. The leadership of the peace process should be with a national, independent and sincere side who can reflect the true hopes of the nation. The analytical and research based report also evaluates and discusses the efforts of involved sides for peace. Another part of the report illustrates the outcomes of surveys which were conducted in major cities of Afghanistan (Kandahar, Heart, Nangarhar, Balkh and Kunduz). Most of the questioned individuals support the struggles for peace and expressed hope for their success.