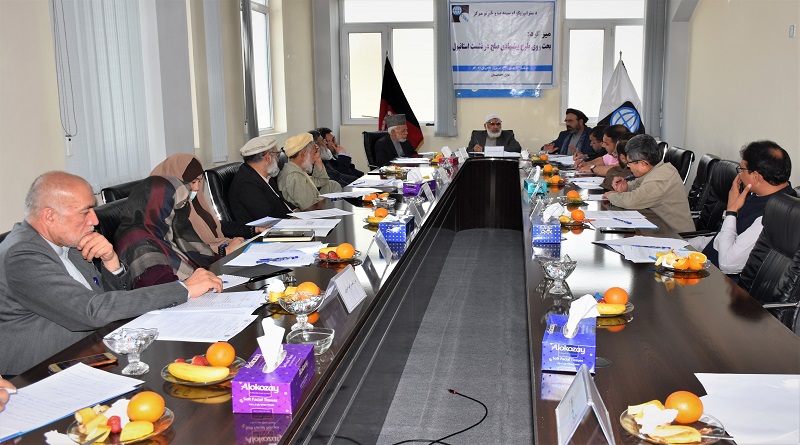 The Center for Strategic and Regional Studies (CSRS) held a meeting to discuss the draft peace plans for the forthcoming Istanbul Conference with the participation of some prominent Afghan political figures and intellectuals.

The round-table discussion was held on Monday, April 12, at the Center for Strategic and Regional Studies (CSRS) in Kabul, and was attended by various elites and political figures besides the academic board members of CSRS.

In his opening speech, Dr. Misbahullah Abdulbaqi said that the purpose of holding this roundtable is to discuss the draft peace plans for the Istanbul Conference. He added that the country is currently in a critical situation, and there is need for the country’s elites to understand this situation, and take advantage of the opportunity to end this long war. He added that if the peace negotiation process fails and the transfer of power was not possible through dialogue and negotiations, the war and violence will persist and both sides will strive to bring change through war and violence, which will consequently worsen the situation in the country. He further said, “Therefore, through this roundtable discussion and subsequent consultations, we are trying to provide ideas and suggestions for the stakeholders in the peace process, in order to accelerate the process and bring closer the positions of the parties involved, and finally lead to resolving the Afghan issue through negotiations.

The roundtable participants then discussed various peace plans including the U.S. draft agreement for peace in Afghanistan to be presented in the Istanbul Conference, as well as the Afghan government’s draft peace plan that was unified by the High Council for National Reconciliation (HCNR).

The outcome of these discussions will be shared after unification and finalization as a package for the success of peace negotiations with the parties involved and other stakeholders in the peace process.