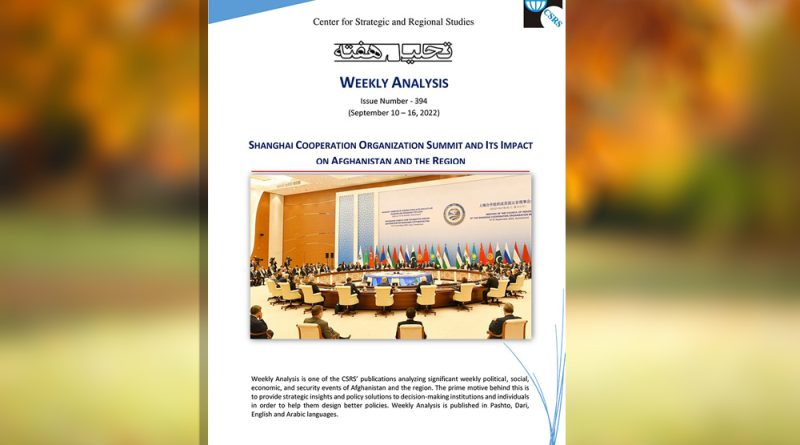 With the invasion of Afghanistan by the Soviets, the interference of regional and international countries increased in the country, and even after the withdrawal of the Soviets, not only these interferences did not stop, but were further increased. The reason for these interferences was that during the Soviet invasion, most of the countries were divided into two blocs: A: Pro-Soviet and B: Pro-Mujahedeen countries. The war was generally between these two blocs; but with the withdrawal of the Soviets, the war took a new dimension and it was now fought between the proxy groups of different countries. At that time, the war was not only between two blocs, but between many rivals in the region, and finally, due to these proxy wars, Afghanistan was dragged into a civil war, and was regarded as the birthplace of “extremism, terrorism, drugs, and separatists”.
Affected by the situation in Afghanistan, five countries of the region came together in 1996, and founded the Shanghai-5 organization. These five countries were: China, Russia, Kazakhstan, Kyrgyzstan and Tajikistan. Three of these countries were directly affected by the situation in Afghanistan. Russia was faced with the uprising of the Muslims in the Caucasus and Bosnia, in Tajikistan the civil war between the Islamic movement and the former communists had begun, and in China too, the East Turkistan Party had started their uprising against the government.
In addition to this, other reasons for the establishment of this organization were the implementation of “Brezhnevsky’s theory of Eurasia” and the creation of a geo-political alliance against the Americans in the post-Cold War.
In the beginning, the general purpose of this organization was to build trust between the member countries and demilitarize the borders; but later, fight against extremism, terrorism and separatism in the region was included in the objectives of this organization.

INTEREST OF SCO TOWARDS AFGHANISTAN

22ND MEETING OF THE SCO

The 22nd two-day meeting of the leaders of the member states of the Shanghai Cooperation Organization was held under the leadership of Uzbekistan’s President Shaukat Mirziyoyev and was attended by the heads of states of the permanent members and observer countries including Turkey, Azerbaijan, Turkmenistan and Armenia and heads of international and regional organizations, including the United Nations as special guests. This meeting was the first face-to-face meeting of the leaders of the member countries after three years due to the spread of the COVID-19 in 2020.
This meeting is believed to be the most important one due to the fact that the region of the member countries of this organization is facing significant changes and events. Among these changes and important events are the war between Russia and Ukraine, change of the system in Afghanistan and the political and economic crisis in this country, tensions between China and the US over Taiwan, conflict between Armenia and Azerbaijan, as well as some other important changes and events including Pakistan’s bad economic situation and so on. Moreover, at least 30 people were killed as a result of armed clashed along the border of Kyrgyzstan and Tajikistan, two members of the organization, on the 2nd day of the 2022 SCO summit.
The discussions of the meeting were overshadowed by war in Ukraine as it has reached a very sensitive stage and Russia has lost some of the captured areas. The presidents of China and Russia met on the first day of the summit, which was the first face-to-face meeting between the two presidents since the beginning of the conflict in Ukraine. After this meeting, the Russian president admitted that China has concerns about the situation in Ukraine, however, he appreciated and described China’s position about the Ukraine conflict as well-balanced. China, however, has not supported Russia’s invasion of Ukraine, but it has expanded its trade with Russia after the start of the war in Ukraine.
The 22nd summit of this organization ended with the approval of more than 40 documents and the publication of a joint declaration, with which the one-year term of office of the President of Uzbekistan in this organization also ended, and according to the decision of the summit, the next term of this organization will be headed by India. One of the signed documents was about Iran’s permanent membership in this organization, and the member countries called it a historical step. Also, the request of Belarus to become a permanent member of this organization was accepted and some new countries were announced as dialogue partners.
The final declaration states that the world is facing many changes and is rapidly moving towards multi-polarity. The statement says that the current international challenges and threats have become complicated and international and regional conflicts and crises have deepened and as such the member countries emphasized that joint and coordinated political ant diplomatic measures should be taken against existing threats and challenges and regional conflicts.

Although Afghanistan was a main focus of the discussions of this summit, it was not invited to the meeting. However, the current de-facto government of Afghanistan has good relations with most of the members of this organization, but the fact that it has not been recognized by any country was the main reason for not being invited to this meeting. Most of the member countries of this organization have a same position regarding the international legitimacy of Afghanistan’s current government and believe that the Taliban should give a positive response to the demands of the world.
On the other hand, Shanghai Organization and the United Nations have an agreement according to which each other’s charter must be respected, and if the Shanghai Organization had invited the unrecognized government of Afghanistan to the meeting, it would have been considered as a violation of the UN Charter. In this way, it is clear that despite the good relations of the member countries of this organization with the Islamic Emirate, they cannot legally interact with the Islamic Emirate on international level issues.
Despite this, the President of Uzbekistan and the interim head of the Shanghai Organization, Shaukat Mirziyoyev, said in an article about Afghanistan before the meeting, that Afghanistan is an inseparable part of the countries of the Shanghai Cooperation Organization and the people of Afghanistan need good neighbors and their support than ever before. In this way, this organization showed that although it cannot legally invite Afghanistan, but it pays more attention to Afghanistan and its position is friendly towards Afghanistan. His statement has been appreciated by the spokesman of the Islamic Emirate by publishing a statement and called it a friendly position.
The participants of this summit also made statements about Afghanistan on the sidelines of the conference; however, in the joint declaration, they emphasized the establishment of an inclusive government in Afghanistan. This statement says: “Member countries support an independent, democratic and peaceful Afghanistan free from all kinds of terrorism and drugs.” The declaration states that it calls for an inclusive government in Afghanistan that includes representatives of all ethnic, religious and political groups.
In his speech, the President of Uzbekistan, Shaukat Mirziyoyev, emphasized that peace in Afghanistan and the political-economic reconstruction of this country should be among the priorities of this organization. He proposed the creation of a special humanitarian fund for Afghanistan and emphasized that Afghanistan should not be left alone in the current difficult situation. According to him, sanctions and further isolation of the current Afghan authorities will turn this country into a nest of terrorists, which, according to him, is not in the interest of the countries of the region. He clearly emphasized the effective relations and talks between the member countries of the Shanghai Cooperation Organization with the Taliban government.
In the final declaration, although the member countries have shown their commitment to efforts against terrorism, separatism and fundamentalism, they insist that interference in the internal affairs of countries under the guise of fight against terrorism is unacceptable.
The member countries of the Shanghai Organization not only do not support armed opposition against the Islamic Emirate, but the majority of these countries have entered into interaction without recognizing the Islamic Emirate. One of the reasons for this is that the Islamic Emirate has adopted an economic-oriented foreign policy and a policy of maintaining neutrality and good relations with all countries. This is why most of these countries support cooperation and international aid with Afghanistan in fighting the economic crisis.
Despite all this, it is clear from the positions of the member countries of the Shanghai Organization that despite the positive interaction with the Taliban, they have concerns about the situation in Afghanistan. From the security point of view, the activity of the ISIS group is of concern for the members of the Shanghai countries, as two Russian diplomats were killed in the latest attack on the Russian embassy in Kabul. From a political and social point of view, the Taliban have not been able to reduce the internal and international dissatisfaction. Recently, a meeting of anti-Taliban politicians was held in Austria, which shows the increase of foreign interference in the case of Afghanistan as a whole. From a social point of view, especially the issue of girls’ education has become a serious debate, which has increased the level of dissatisfaction against the Taliban at the national and international levels. For example, the United Nations Special Rapporteur recently assessed the human rights situation in Afghanistan as very bad. However, the Islamic Emirate rejected the latest report of the UN Special Rapporteur as biased.

The Shanghai Cooperation Organization is an important organization at the regional and international level, and two of its members, China and Russia, are world superpowers and play an important role in international politics. Important members of this organization are Afghanistan’s neighbors and their positions can have a deep impact on Afghanistan’s issues.
The clear message of not inviting Afghanistan to the SCO summit is that international legitimacy is very necessary for the current government of Afghanistan and without recognition, Afghanistan will be isolated at the international and regional level; Because countries like China and Russia are bound by legal restrictions and cannot invite Afghanistan to such a meeting.
If we look at the positions of the member countries of this organization, it seems that most of these countries are trying to play a positive role in the case of Afghanistan, but there are many political, social and security issues that create limitations for these countries to deal with the Taliban. For this reason, it is believed that if the Islamic Emirate is not able to gain the satisfaction of the countries of the region and the world, there will be no significant progress in Afghanistan’s interaction with the world and at least with the countries of the region in the near future.