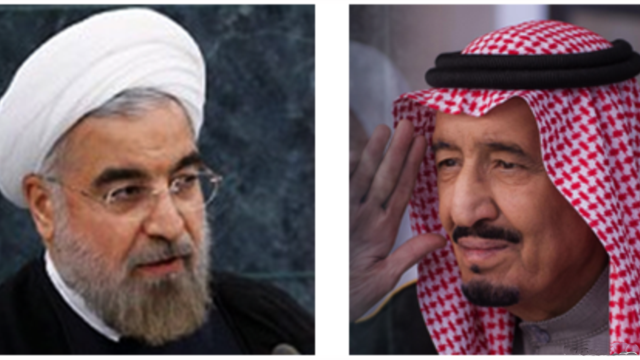 In recent few weeks Saudi King Salman bin Abdul-Aziz invited considerable number of leaders Sunni countries to the Kingdom. The leaders included the coup-president of Egypt Abdul Fatal Al-Sisi, Turkey President Recep Tayyeb Erdogan, the Amirs of Kuwait and UAE, the PM of Pakistan Mohammad Nawaz Sharif, and Afghan President Ashraf Ghani. In these meetings, the main agenda of talks was the increasing influence of Iran in middle-east (Syria, Lebanon, Iraq and Yemen), the IS group and the US-Iran talks which is perceived to broker a deal regarding Iran’s nuclear program in the near future.

The considerable issues are the background of Iran-Saudi relations, the reasons of strained relations, the Saudis current concerns and the efforts of forming a Sunni block.

The Saud dynasty of Saudi Arabia has long term relations with Iran which go back to the time when the dynasty took over the power in Hejaz. During that period, “Saud” had some differences with “Sharif” of Makkah, and the then Persian King Raza Shah made a failed effort to reconcile them. Later when Abdul Aziz reached the power in Saudi Arabia, he invited a delegation from Persia to the Kingdom.

The two countries established diplomatic relations in 1929, and in the same year they signed a friendship agreement. Their relations faced ups and downs during the five succeeding decades (till Islamic Revolution).

In the period (1929-1979) the relations started deteriorating due to Iran’s claims of ownership over some Arab territories. Iran had claims over Bahrain, and in Hormuz strategic strait on Abu Musa, Greater Tunb and Lesser Tunb (Tunb Buzorg and Tunb Kochak), and now these islands are under Iran’s control and territory.

The second reason to deteriorate the relations was when Saudi and Arab countries used oil as a tool against Israel and the western countries in 1973, but Iran denied accompanying them. During Yom Kippur war Saudi and Arab world used oil as a weapon against Israel which caused inflation in the west and bankrupted their economies. This crisis is still called as “Oil Embargo 1973” and economic crisis.

Another reason was when Iran invested on military sector that scared Saudis and called it the “expansionist efforts” of Iran.

Although, the aforementioned are the reasons of the strained relations between the two countries, but in the meantime, Mohammad Raza Shah Pahlawi supported the policies of King Faisal which formed few organizations for Muslims. Besides this, both countries opposed the policies of former USSR in middle-east, and they also remained in the same page against Jamal Abdul Nasser.

A Saudi academician who conducted research over the relations of Iran and Saudi writes: “In that period, the two countries learned to cooperate in certain sectors and both will try not to allow the existing differences affect their relations.”[1]

The famous Islamic Revolution of Iran (February 1979) worsened the relations of Saudi and Iran. It was because the revolutionary leaders took an anti-western stance and denounced the kingdoms in Muslim World. In this time, the fundamental points of differences were Sunni-Shia rivalry and export of Iranians views into the Muslim World.

The relations became more strained when Iraq-Iran war took place and Saudi supported Iraq. Later on an incident in Hajj (pilgrimage) ceremony claimed the lives of 400 pilgrims. Since the victims were Shias and Iranian citizens, therefore Iran sought the Diyah (the money being paid to the deceased family from the killer according to Islamic Sharia) and excuse, which finally caused the cessation of Saudi-Iran diplomatic relations and Saudi imposed ban on Iranian pilgrims. The ban continued until 1991.

Later in the 90s, the relations got better to some extent. Khatami and Rafsanjani paid visits to Saudi, and then King Abdullah traveled Iran to participate in OIC conference held in Tehran in 1997. In late 90s the two countries signed an agreement as well.

For the first time the two countries called each other “Brother Countries” when Ex-Iranian President Mahmoud Ahmadinejad paid a visit to Saudi and King Abdullah welcomed him in person at the airport. Although the relations became strained later due to Iran’s nuclear program and the Arab Spring. Abdullah even demanded US to attack Iran and destroy its nuclear program, WikiLeaks later disclosed.

Why Saudi Needs a New Alliance?

The question arises that the relations of the two countries have already been tense and they have already been involved in a cold-war against each other, which has also transformed to a hot-war in some Arab countries; why Saudi feels the need of an anti-Iran Sunni alliance now? There are few reasons that emerged out of the Geo-Political changes:

United States has been criticizing Iran’s nuclear program for two decades and imposed embargos too. Beside this, Saudi has pressurized other countries not to sign any economic agreement with Iran. A clear example of it is the Iran-Pakistan-India pipeline which has not been implemented yet due to US pressures.

However, the United States has given the green lights of attacking Iran many times, the long wars of Afghanistan and Iraq snatched the potential to wage another war against Iran.

The Iran-US relations were very tense during Mahmoud Ahmadinejad era. But when Hassan Rohani, who is famous as a mainstream politician in the west, reached the power, the reconciliation process restarted. There have been rumors since two weeks that the two –once enemies- may conclude a nuclear deal. The rumors not only provoked the concerns of republicans in US, but also of Israel and Saudi leaders.

It has been said that according to the deal, Iran would allow international inspectors to visit its nuclear facilities anytime and anywhere. Iran would not enrich more Uranium than the specified limit and would remove the already enriched one, which would not enable them to create atomic weapons. In response, US will remove economic embargos and the country would be allowed to take part in international trade.

If US and Iran reach such an agreement, history would remember Obama for a great achievement and also Iran would emerge out of economic embargos and would develop. But the two countries face some internal and external challenges. President Obama is already under pressure of the Republicans whose 47 members sent a letter to Iran demanding them not to trust their President. The Republican members invited Israeli PM Benjamin Netanyahu too. Externally, Obama would be under pressure of its strategic friend, Saudi. In the same way, President Rohani is under the influence of the clergies inside the country.

Yemen having border with Saudi and some Shia population has long remained another ground of Saudi-Iran cold war. The Hothies having ideological linkages with Iran have the intentions of revolution against Abdullah Salih since 2011. In 2014 the Hothies came out of their strongholds and established contacts with Yazedis which made them even more powerful.

Hothies occupation of the presidential palace made the President Mansoor Hadi resign. Previously, Saudi enjoyed good relations with Sanaa and had close cooperation with it. But now, it is a source of concerns to see the increasing influence of an Iranian backed group. Both, Iran and Saudi try to surround each other. In a same way, in 1980s Saudi enjoyed strategic friendship with Afghan Mujahiddin and Pakistan. It supported Iraq in Iran-Iraq War. Saudi tried to surround Iran. Now, Iran tries to surround Saudi. It supports Bashar al Assad in Syria, Hezbollah in Lebanon and Hothies in Yemen. In 2009 the Hothies also killed five Saudi soldiers in a border clash.

Although, the oil issue previously deteriorated the relations between the two countries, currently, the oil not only tensed the Saudi relations with Iran but also with Russia. This was the reason when Putin denied to meet the Saudi Foreign Minister in November 2014.

Saudi has the capacity to produce 6 to 12 million barrel oil daily. Iran and Russia consider US and Saudi behind the falling oil prices. As Russia is more dependent on oil, now US wants to pressurize it for the Ukraine dispute and Saudi aims to make Iran face economic defeat.

Saudi produces a massive amount of oil to fall its prices in international markets. It has bad impacts on its own economy also, but due to great oil reserves it can hit the economy of the countries having less reserves.

Saudi has been very active in few months since early 2015. At the end of January, President Obama visited Saudi and then the England Prince visited King Salman. But when Iran-US talks and when the Yemen issue emerged in the region, Saudi invited Egypt, Turkey, Kuwait, UAE and Afghanistan leaders for the talks. The countries are not only Sunni, but also surrounding Iran geographically. Although the answer for question “will Saudi be able to form a Sunni anti-Iran alliance?” is related to the decisions of the countries.

Pakistan and Turkey may not enter an alliance whose core aim is to surround their neighbor. . They would rather prefer their cordial relations with both. Pakistan has already rejected the Saudi demand for more troop’s deployment, as Dawn newspaper reports.

Afghan President Ashraf Ghani has also paid a visit to Saudi based on the invitation of King Salman. Though, the Afghan media considered peace talks with Taliban as the main aim of visit, the analysts think the IS issue and the increasing influence of Iran in Arab world were the agenda of talks.

Since Afghanistan faces instabilities at home and yet Saudi is not ready to give work visa for Afghans. From the other side, Saudi has not invested in Afghanistan’s reconstruction in the last 15 years. It would not be fair for Kabul to be a victim of others rivalries and once again became the ground for proxy war. Kabul can cooperate Iran and Saudi regarding IS’s threat, because it is a common threat. If Afghanistan supports Saudi against Iran, it will have negative impacts on Afghanistan.