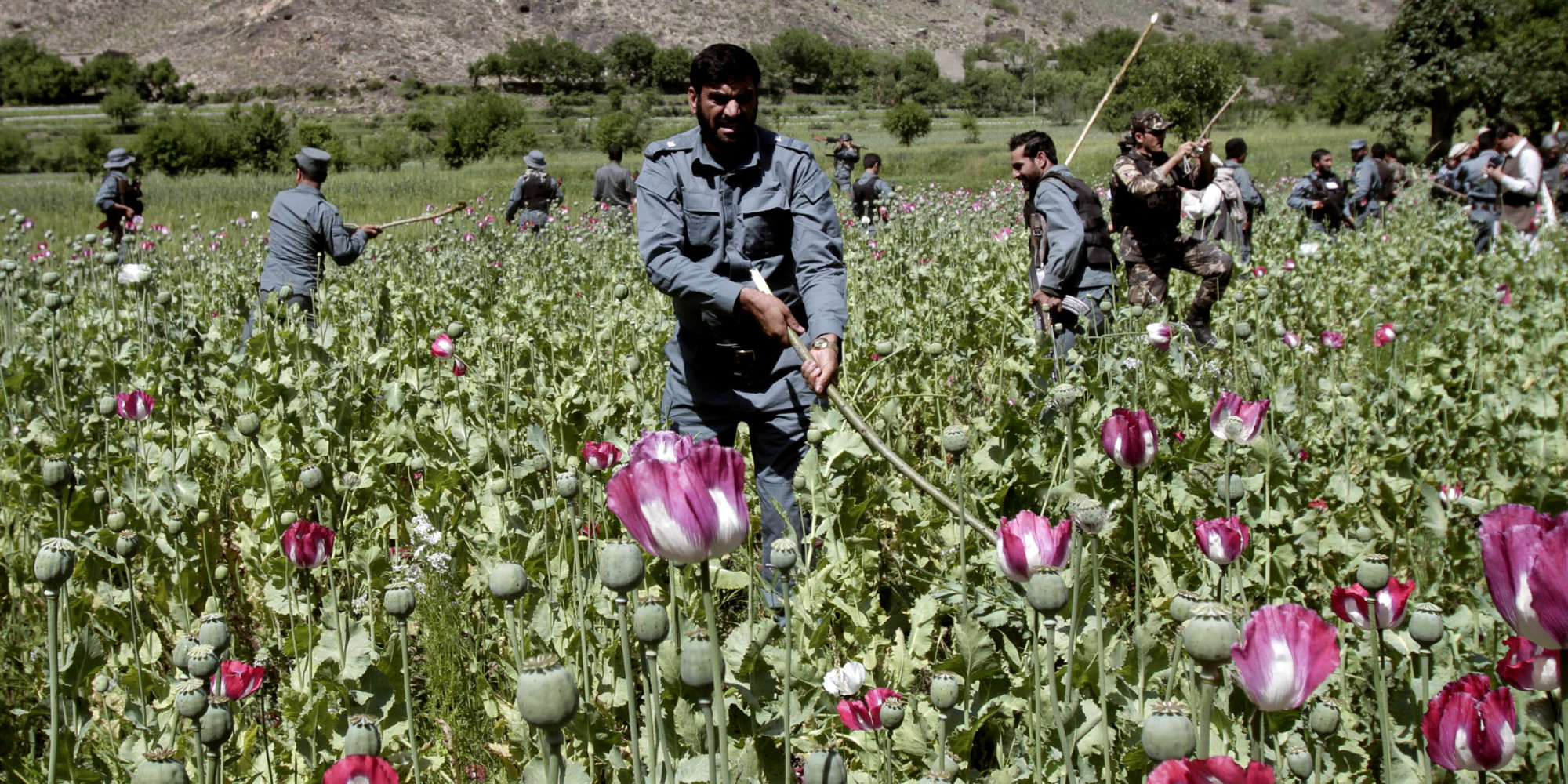 After the oil and weapons drugs trade is biggest in the world. Surveys of the United Nations Office of Drug and Crime (UNODC) show that Afghanistan produces $7 billion worth drugs annually. The production has increased by 40% since 2001 fall of Taliban regime in Afghanistan.

This year around 250,000 hectares of opium was cultivated, but the land that has been destroyed is as following:

There is no clear information about destroying the opium cultivated land in Farah, Nimroz and other provinces and this year as well, from the total 250000 hectares land under cultivation of opium only 1138 hectares has been destroyed. The officials say that these shortcomings are because of involvement of security forces in protecting election process or we can say the drugs Mafia gets advantage of the election as well.

Whether last year’s record is will be broken?

If we see the last few year’s surveys by organizations such as UNODC, in 2001 or the last year of Taliban’s rule, the opium production was 185 tons this also included the previous year’s production which were stored by the smugglers. Mullah Mohammad Omar the Taliban’s leader in a decree in 2001 banned the cultivation of the poppy. After the Taliban regime’s fall, the graph of the production of opium in Afghanistan has been growing. The 2009 survey which has been published by UNODC shows this fact:

According to UNODC, from 2001 to 2010 drugs worth of $70 billion has been produced, but the question is how much of this amount came to the farmers?

According to UNODC report, from the $70 billion just $2 billion went to farmer’s pockets and the $66 billion went to drug smugglers and mafia inside and outside the country. This organization believes that $200 million of this amount ($20 million each year) went to insurgents and government’s militant opposition.

In past years a strong propaganda has been made about anti poppy cultivation. Alternate cultivation and encouragement of farmers for not cultivating poppy were amongst the programs. It is said that during the 12 years more than $7 billion dollars were spent for this purpose; but it is not clear that where this entire amount went? But apparently the farmers did not benefit from that amounts.

One of the ways for counter narcotics or fight against poppy cultivation is promotion of an alternative cultivation, which caused encouragement of saffron cultivation in some provinces but in some others there were obstacles against it.

The first obstacle was war and insecurity in Afghanistan, which challenges government’s authority in most of the regions. Therefore until peace hasn’t come, preventing poppy cultivation seems impossible.

Corruption is another problem which challenges an efficient fight against poppy cultivation. However military officials declared in press releases that they have arrested some smugglers, but none of the major smugglers has been arrested yet. This is because of presence of these smugglers in the government.

Other types of drugs are also grown well in Afghanistan, according to UNODC report cannabis (which gives hashish lately) in comparison with other countries grows very good in Afghanistan. This plant gives 145kg/hectare in Afghanistan, while in Morocco gives just 40kg. Therefore Afghanistan is also the biggest producer of hashish in the world.

Average price of per kg opium is $200 in Afghanistan which is a good income for poor Afghan farmers who has limited land; they consider it beneficial to plant rather than licit crops.

This question is still not answered that why the opium production in Afghanistan increased since 2001? It is said that the world desire for opium is 5000 tons each year, but in Afghanistan in some years more than this need has been produced and the rate is not changed, while this is a formula in economy that while the market is overloaded the rates became lower.

It is reason is more political than economic, there are some secret strives to addict more people with this malady, and this program focused mostly on the countries who have problems with USA, like Russian federation and Iran. The large amount of Heroin from Afghanistan goes to or through these countries which caused a big social and economic problem for these countries. The number of addicts in Afghanistan also increased to more than 2 million.

A glance to these facts shows that the cultivation of poppy in Afghanistan was prevalent from the past, but after the foreign presence in Afghanistan it hit all the records.

On the other hand, exporting hundreds of metric tons of heroin to other regions like Europe is by land transit, which is not possible without assistance of the officials with the mafia in the countries from which the heroin are being smuggled.

A huge amount of these drugs are being exported by air, which is also not possible without governmental official’s assistance with the mafia. Therefore one can understand why the production of opium had increasingly growth since 2001.

Finally, the question rises that how the obstacles to approving money laundering law, which has apparent and secret hands involved in, relate to the income generated from illicit drug trade.