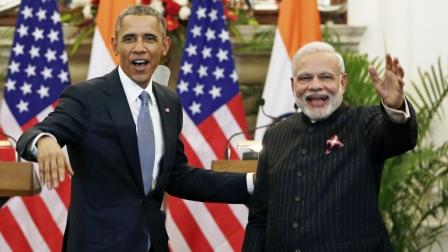 The US Secretary of Defense and Indian Defense Minister signed the “Logistic Exchange Memorandum of Agreement (LEMOA)” last week. Coincide with that, the US Secretary of State John Kerry also visited India and met some Indian Senior Officials.

The signature of LEMOA and the US Secretary of States’ visit to India occur at a time when the tensions in India-China and India-Pakistan relations are rising further.

The geopolitical changes in the region in 2016, the direction of US-India relations and the impacts of recently signed LEMOA between the US and India on the region are the issues that are analyzed here.

Since 2015, significant changes have occurred in our region and neighborhood; for instance Iran came to an agreement with the P5+1 group of world powers over its nuclear program; based on this agreement Iran would stop its nuclear program in exchange for the lifting of the economic sanctions imposed on it. The deal put positive impacts upon Iranian economy and not only did the country gain access to its $115 billion frozen assets; but also the way was paved for other countries to collaborate in economic and trading fields and invest in Iran.

In the meanwhile, the Chinese President Xi Jinping paid a visit to Pakistan and inaugurated the China-Pakistan Economic Corridor (CPEC). China would invest $46 billion in transport, transit and energy sections in the CPEC. Since this economic zone passes through parts of “Kashmir”, India is thus opposing it.

After lifting of economic sanctions imposed on Iran, Afghanistan, Iran and India signed the Chabahar port deal which will provide an alternative way for Afghanistan and India instead of Pakistani route and thus would bypass Pakistan. Besides, India will be connected to Central Asia through Afghanistan.

In April 2016, China blocked India’s bid to ban Jaish-i-Mohammad’s chief Masood Azhar and put him on a United Nations terror list. In the meanwhile, in July 2016, despite the active diplomacy, India failed to gain the membership of Nuclear Suppliers Group (NSG). India blame China for not getting NSG membership but China argues that according to the regulations of NSG any country who has not signed the “Nuclear Non-Proliferation Treaty (NPT)” cannot be a member of the group, therefore, India must first sign the treaty. Later-on, due to the above two factors, India openly opposed the two Chinese projects (one belt, one road and China-Pakistan economic zone).

On the other hand, since the past three months, the India-Pakistan and India-China relations are getting tenuous. In July 2016, Burhan Wani was killed in Indian Kashmir which besides deteriorating the security situation in Kashmir resulted in the escalation of tensions in Delhi-Islamabad relations (after the death of Burhan Wani, Curfew was imposed in Kashmir, the leaders of All Parties Hurriyat Conference (APHC) were arrested and around 70 people were killed and thousands were injured in various demonstrations). In response to the death of Wani, Pakistani Prime Minister Nawaz Sharif said that he was ‘shocked’ and called Wani a “martyr”. Additionally, Pakistan raised the issue of killing Burahan Wani in the United Nations. In response, Indian Foreign Ministry accused Pakistan of “glorifying” the “terrorists”. Besides, speaking at the ceremony to celebrate India’s Independence Day, Modi raised the Baluchistan issue and thus hit Pakistan where it hurts them the most.

The US President Barrack Obama announced the “Rebalance to Asia” policy in 2014 and some Chinese scholars interpret it policy as encirclement of China; because according to them the Rebalance to Asia means the rise of India, Japan and some other countries against them. Based on the recent agreement between the US and India, along with the other aspects, the trade and defense relations will also be strengthened.

On the other hand, after Narrendra Modi seized power in India the US-India ties entered a new stage. Since 2014, Modi has traveled to the US four times (twice to attend international conferences and twice as a state visits). In January 2016, Indian Prime Minister Narrendra Modi invited US President Barack Obama to attend India’s Republic Day ceremony; and hence by doing so Obama became the first US President that traveled twice to India during his eight year tenure and attended India’s Republic Day parade.

Regional politics witnessed a new geopolitical change when Indian Defense Minister Manohar Parrikar went to the US and met his American counterpart Ashton B. Carter. Since 2016, it is the second visit of Indian Defense Minister to the US and his sixth meeting with the US Secretary of Defense. In his recent visit, India and the US signed the controversial LEOMA which many Indians were also against it (Congress Party). Based on the agreement the two countries may use each other’s land, air and naval bases when its need occurs. In response to the anti-LEMOA voices in India and some regional countries, the US Secretary of States pointed out in a joint press conference with the Indian Defense Minister, that “the agreement would not provide the means to have military bases on each other’s soils”.

On the other hand, the US Secretary of States John Kerry paid his forth visit to India and met the Prime Minister, National Security Advisor and Minister of External Affairs of the country. Four significant discussions occurred in these meetings:

Frist; the US-India bilateral ties would be strengthened. According to the US Secretary of States the two countries will boost bilateral trade fivefold and increases it to $500bn and the US would make efforts to include India in NSG in upcoming year.

Second; the US refused to distinguish between good and bad terrorists, “terrorism is terrorism!” said Kerry. (He pointed out Pakistan to take tough actions against Lashkar-e-Tayyiba, Jaish-e-Mohammad and the Afghan Taliban.)

Third; both ‘emphasized the importance of maintaining freedom of navigation, freedom of over flight and unimpeded lawful commerce throughout the region, including in the South China Sea’.

Forth: reinitiating the trilateral Afghanistan-the US-India talks on Afghanistan.

Afghanistan and The future Scenario in the region

China and Pakistan would have observed the events in the last week because John Kerry’s expressions during his visit to India were in a large part about Pakistan. On the other hand, China would be deeply concerned about the signature of LEOMA between the US and India, because it occurs at a time when the US-China ties are tenuous over the South Sea issue.

The timing of signing of LEOMA and John Kerry’s visit to India is coincident to Delhi-Islamabad and Delhi-Beijing’s downturn ties. . The last one year’s events show that India is rapidly approaching to the US and if it is continued so in the future, then India would, for the first time, turn its back to its traditional policy.

On the other hand, Afghanistan needs Indian aids and military support. Afghanistan can neither cut nor limit its ties with India only because of another country’s concerns; but in the current regional game, if the purpose of the events is the alliance of the US and India against China and Pakistan, then Afghanistan must pursue its traditional policy (neutrality) and should not take part in such coalitions.