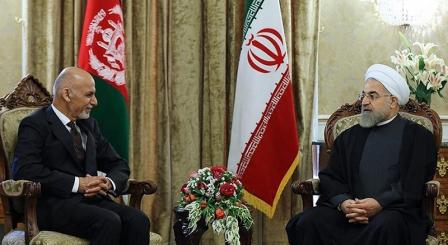 The Afghan Minister of Foreign Affairs Salahuddin Rabbani went to Iran on a two day official trip. During his visit to Iran, Rabbani met Iranian Minister of Foreign Affairs, Chairman of the Parliament, Secretary of the Supreme National Security Advisor, and some other officials and discussed various political, security, economic issues and expansion of bilateral relations between the two countries.

The NUG foreign policy have been different than that of Karzai’s 13 years rule, the beginning of NUG’s relations with Iran, the background of bilateral ties between the two countries, Kabul-Tehran relations in the two years of the NUG and its challenges are the issues that are analyzed here.

The background of Kabul-Tehran ties

During the Soviet invasion of Afghanistan at the end of the 1970s, Iran was one of the first countries to condemn the invasion and termed it as explicit violations of Afghan national sovereignty and the principals of international law and in the meanwhile opened its borders towards Afghan refugees.

During the five years of the Taliban rule in Afghanistan, Iran backed the United Frond (Northern Alliance) and coincides with the military presence of the US and NATO in Afghanistan in 2001, the two countries maintained normal relations and their senior officials began to pay visits to each other’s countries.

Despite the differences in the views of the NUG’s two leaders regarding relations with Iran, the NUG have succeeded to maintain the necessary balance in its foreign policy with Iran and its (Iran) regional and international rivals.

Three months earlier the Chabahar Port deal was signed between Afghanistan, Iran and India which was one of the most significant steps toward promotion of joint economic and regional collaborations between the three countries.

More than two million Afghan refugees in Iran is another controversial issue that has always been the subject of discussions between the two countries, but in the past two years it seems that Iran is seeking to either legalize the presence of Afghan refugees or pave the way for their voluntary return to Afghanistan.

The Afghan Minister of Foreign Affairs Salahuddin Rabbani visited Iran on August 28, 2016. The purpose of the visit is said to be discussions about bilateral relations in various areas particularly drug smuggling, which has always been an issue of concern, and promotion of political and economic cooperation between the two countries.

In his meeting with Iranian Minister of Foreign Affairs, Rabbani said that Iran has a particular place in the Afghan foreign policy and that there is serious determination among the Afghan leadership to enhance political, security and economic ties with Iran.

In this meeting the two sides also discussed about trade and transit between the two countries including Khawaf-Herat railway and the challenges of Afghan refugees and students in Iran and both sides emphasized on cooperation in order to address these challenges.[1]

In his meeting with the Iranian Chairman of Parliament Ali Larjani, the Afghan Minister of Foreign Affairs spoke about the expansion of relations and meetings between the officials and Parliament members of both countries with the purpose of improving relations between the two countries, and in this regard both sides agreed. [2]

Besides that, Rabbani, in his meeting with Iranian Secretary of Supreme National Security Advisor Ali Shamkhani, discussed the security threats and the Iranian side showed preparedness to fight against armed oppositions of the Afghan government. [3]

Opportunities and challenges in Kabul-Tehran ties

NATO’s military presence (particularly the US) in Afghanistan, the warm relations between Afghanistan and Saudi Arabia and publication of the political motives that are against that of Iranians in Iran-Saudi or Shiite-Sunnite rivalry, expansion of “ISIS” in Afghanistan and Iran’s stance towards the Taliban, cultivation and smuggling narcotics particularly in the South-West of Afghanistan, Iran’s intervention in Afghan domestic affairs through supporting some political parties, sending Afghan refugees to Syrian war and execution of Afghan youth who have gone to Iran seeking employment and get executed for crimes that do not require execution, deportation of Afghan refugees in contrast with the bilateral agreements and some other issues are the challenges that sometimes affect the bilateral ties negatively. [4]

In the first months of the NUG when the Saudi Arabia demanded from Islamic countries including Afghanistan to clear their stance on supporting Saudi Arabia in its Yemen war; given some series of expedients, Ghani supported Saudi Arabia in its fight against Houthis in Yemen, but he came under pressure by some Pro-Iran circles.

The expansion of “ISIS” presence in various Afghan provinces which seems hard for the Afghan government to perish them and especially when the peace and reconciliations doors are closed to them and given the ISIS’s anti-Shiite political view, ISIS is another factor that can challenge the future ties between the two countries. The expansion of ISIS in Afghanistan has also changed Iran’s stance towards the Taliban.

Recruiting Afghan workers to fight in Syria by Iranian Revolutionary Guards, which has recently been reported by international institutions and the pictures which are published on the internet pages and media prove it, it is also one of the challenges that damages strategic Kabul-Tehran relations.

Reports suggest that besides sending other forces in Syria, Iranian Revolutionary Guards encourage the Afghan workers to fight in Syria, and after necessary military trainings they send these workers in various Syrian cities and in case of being killed or injured they bring them (the Afghan workers) back to Iran. [5] According to estimations, about 10 to 12 thousand Afghans fight alongside with Basharul Assad’s army in Syria. Iranian officials have said that these Afghan citizens have volunteered to fight in Syria.[6] Human Rights Watch released a report last year that Iran sends thousands of illegal Afghan refugees to Syrian war. The relevant Afghan organs pursued the issue. [7]

Despite the challenges described above still the two countries poses the opportunity to prevent political mistrust and increase trade turnover between the two countries. The two sides can also pave the way for economic development of their countries particularly through Chabahar port which can connect Afghanistan to the world market.

[1] The Afghan Ministry of Foreign Affairs, meeting between the Afghan and Iranian Foreign Ministers, Aug29, 2016:

[2] The Afghan Ministry of Foreign Affairs, meeting of the Afghan Foreign Minister with the Chairman of Iranian Parliament, Aug28, 2016:

[3] The Afghan Ministry of Foreign Affairs, Meeting of the Afghan Foreign minister with the secretary of Supreme National Security Advisor of Iran, Aug 30, 2016:

[7]Syrian war, Afghans that are sent from Iran to fight in Syria, BBC:

And also read, Afghanistan investigates on the issue of Iran sending Afghans in Syrian war, BBC: