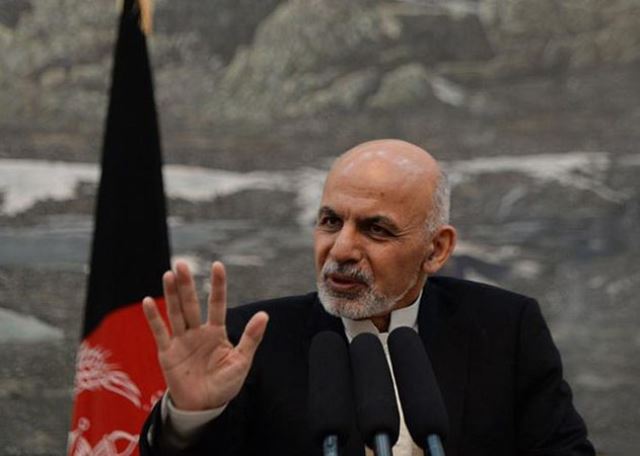 Afghan President Ashraf Ghani reacted against the recent insecurities in the country after the Azm operations of Taliban. The President said, Afghanistan is stuck in an imposed war and it would respond to it by war. But with it he would continue the peace process as well.

The statement of the President has nothing new. During the history of Afghanistan there has always been a pretext of peace behind any war. Every group when waged a war it does not say it would fight forever, rather, they have considered conflict a route to peace. In every conflict, the opposition is considered the wicked entity in the globe that should be suppressed and removed, and then peace will come. From civil wars to the two world wars, all of them have been fought for the hope of peace.

Only in 20th century, 220 wars were waged which claimed the lives of 200million human beings.

Usually, the involved parties in the wars accuse their foes as they have imposed wars. Therefore, the term “Imposed Wars” is a way of escape.

We have witnessed the 36 years of war in Afghanistan where every party accused its foes for imposing the war. The story still goes on. Even the US invasion of Afghanistan was also interpreted as the imposition of war by the terrorists on the US.

President Ghani is not an exception in calling the ongoing war as imposed. The armed opposition of the government, too, considers the war as imposed upon them.

Taliban believe that the US invasion and occupation of Afghanistan is an imposed war and they are inevitable to continue it till the full liberation of the country. Taliban said in their Qatar statement:

“Americans and their allies have militarily invaded the sovereign state of Afghanistan. They have martyred and incarcerated thousands of innocent people. They have desecrated the sanctities of the masses and have demolished their houses, lands and orchards. Therefore, prior to everything, foreign occupation which is the root cause of all adversities should be terminated so that the peace process and mutual inter-Afghan negotiations could proceed. On the other side, regional countries are also solicitous about the presence of foreign forces inside Afghanistan. So the extension of occupation means the persistence of war.

It is a fact that in the presence of foreign forces, an independent government cannot be formed in Afghanistan. Neither can the sovereignty of the country be restored nor can any policy based on Islamic and national interests be implemented. Therefore, as the war was instigated in our beloved homeland with the beginning of foreign occupation, Insha-Allah (God willing) the withdrawal of foreign troops will initiate peace process amongst the Afghans as they will find an opportunity to get together on the basis of their common grounds and establish an Afghan-inclusive Islamic system of life.”

Hiz-e-Islami, too, calls it “imposed” war

This not only Talibans’ view. HI of Hekmatyar which does not have any considerable role in the war, has the same stance like Taliban. HI says in its statement regarding war and peace in Afghanistan:

“We want peace. Our nation wants the end of war. But war and reconciliation is completely in hand of US. They [US and allies] have imposed war on us and they are the reasons behind the continuation of war. US wants to have long-term presence in the region. And for this, it needs a controlled war to convince its people. It neither gives any authority to Kabul regime to make a step towards peace nor does itself withdraw its troops from the country, so that let Afghans to sit together and solve their problems. Karzai [the former president] was right when he said ‘the key of war and peace in Afghanistan is with US’…. Kabul regime is not authorized by US to make any peace deal with the opposition.

Ashraf Ghani mad efforts to broker peace deal and he has sent some letters to the Amir of Hizb-e-Islami [Gulbaddin Hekmatyar], but the Americans opposed him.”

During election campaigns, Ashraf Ghani used to insist on that making efforts for peace would be in his priorities. During the campaigns some rumors circulated that Taliban, not only opposed casting votes, but also they have participated in Ghani’s favor.

Afghan people who bear the burden of war on their shoulders had hopes that the newly formed government will make efforts for peace. President Ghani has reiterated many times, that without peace, developmental project will not bear fruit.

When the President believed this much on peace, than why he signed BSA (Bilateral Security Agreement) with the US?

The response for this question may be that the President believes in war for peace. As we said earlier, during the history, the pretext of any war was peace. The current government also signed BSA with the hope that US will support Afghan troops in the war against Taliban. The US supporters insisted that it should be understood to the Taliban that they would not achieve anything through war and they should give up their armed opposition. President Ghani says, he would continue war, but will not neglect peace. It means that first Taliban should be weakened by military operations and then peace talks should be initiated with them.

The wars are first imposed on mentalities, before any bullet is being fired. Human beings can prevent wars and violence and do not consider bullet the only way to reach to their goals.

Therefore, if any nation wants peace, it should think about the repercussions of war before thinking about war and violence. Especially for us Afghans, who have spent 36 years in war, the experience is enough. The past 36 years of war teaches as that during this period even the super powers could not bring peace to the country. During the period, no group has been removed through war, rather, as a result of continuation of war, new and more violent groups emerged.