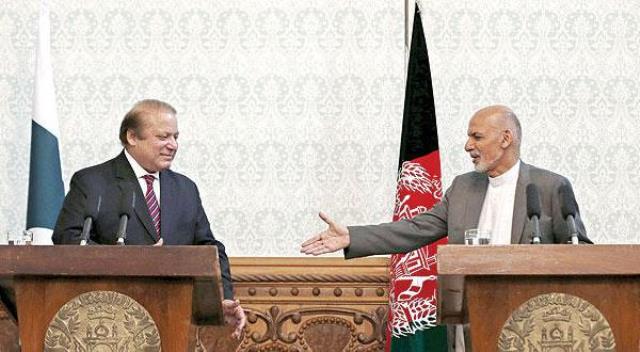 The visit has been paid in such period of time, where Pakistan’s COAS promise that Taliban will initiate direct talks with the Kabul in the mid of March is expired and on the other hand due to Taliban’s summer offensive – Operation ‘Azm’- the security of the country is being deteriorated and challenged to the large extent. The visit is too paid after the Doha Pugwash Conference, where different Afghan factions participated in unofficial discussions.

The starting of Peace talks?

Now, the question arises, whether the “Pugwash” conference was arranged based on General Raheel Sharif’s promise to President Ghani that Taliban will join peace talks in mid-March? First of all, no Afghan side participated officially in “Pugwash” conference except Taliban. Secondly, no Pakistani citizen participated in the conference. Despite that, keeping in view the former diplomatic efforts of Taliban’s political office in Qatar, Pakistan’s initiative seems unlikely. If Pakistan could arrange the conference, then, it might have been called in Dubai, Kabul or Islamabad, as it was promised to President Ghani in February.

Taliban announced their summer operations “Azm” on 22nd April. The Azm operations unprecedentedly transferred the insecurities from the traditional south to the north of the country. As a result of the operations for the first time Taliban have been able to reach to the vicinity of Kunduz city. Moreover, Taliban captured Gorteepa, Jawand district of Badghis, and the Nawa district of Ghazni has been in Taliban’s control for the last ten years.

First: Taliban usually announce their fresh operations in spring season. From one hand, the season is fair for wars in Afghanistan and on the other; it gives morale to its fighters;

Second: the ongoing operations of Taliban are tenser compared to early year’s operations. This year, some US based media posed the presence of ISIS in Afghanistan, some others predicted that ISIS will succeed Taliban. One of the reasons behind such type of increased insurgency is that Taliban may want to practically refuse such rumors;

Third: since the last two months, especially when Pakistan Army Chief General Raheel Sharif paid several visits to Kabul and promised that Taliban will initiate peace talks with Ghani, it emerged hopes that Pakistan will sit Taliban in peace negotiations. Now, Taliban are trying to show their independence;

Fourth: Afghanistan signed the controversial “BSA” agreement with the US. Taliban now tries to prove their presence in spite of the agreement.

The increasing trust deficit between Kabul and Islamabad

In the recent months, most of the Afghan media and members of National Assembly widely criticized Gahni’s foreign policy which just gives privileges to Pakistan.

Besides this, there are differences among high level members of National Unity government regarding foreign policy of the country. The disagreements appeared during Yamen crisis.

Even the President and CEO have some disagreements over relations with Pakistan. The second deputy of CEO, Mohammad Mohaqiq said that, they believed in peace, the “neighbors” promised them, therefore, they were heedless and the attacks of Taliban increased. It very clearly expresses the level of mistrust.

The factors of the emerged mistrusts in NUG during the last six months are as follows:

The Afghan government considered Taliban as puppets of Pakistan. Therefore, it gave some unprecedented privileges to Pakistan and hoped that this time Pakistan will be honest in its promises. But after six months, nothing changed. Rather, the insecurities increased in Afghanistan. The problem with the Afghan Government was that it linked all its hopes with Pakistan. Had the Afghan government used the two sided diplomacy, it may have had more chances of success. From one side it could continue talks with Taliban in Qatar and from the other side pursued gradually its relations with Pakistan.

The participants of Pugwash conference disclosed that the new policy of President Ghani provoked Taliban. Now, Taliban show that neither they are puppets of any one nor are under influence of any side. Therefore, they initiated their spring operations with full intensity and tried to make their foreign policy away from the influence of Pakistan. For this cause, Qatar Office was inaugurated. The detainment of Taliban Qatar Office head, Said Mohammad Taib Agha’s brothers in Pakistan and house arrest of Mullah Beradar are examples that Taliban tries to have independent policy. Though, Pakistan still has some sort of Influence over Taliban, but not to the extent to bring them to the table of negotiations.

Pakistan COAS General Raheel Sharif’s promises are very vital in increasing mistrusts. Pakistani officials gave strong promise; they have even specified the exact date for talks. But now it is May and they could not persuade Taliban for Peace talks with Afghan government.

The recent increase of insecurities in the country especially its expansion to the north is another factor that makes Afghans doubtful of Pakistan’s actions and promises. The insecurities include blasts and deadly attacks around Afghanistan including Kabul.

The menace in Afghanistan is that a number of officials are lobbying for Pakistan while some other are doing for India, no one keeps in mind the national interest of Afghanistan. Each of the lobbies is trying to limit the relations of the country with one side. Therefore, when the Afghan relations improved with Pakistan the Indian lobby started activities to derail them. Though the considerable reasons behind the mistrust are the above one, this one cannot be underestimated too.

In December 16th of last year, when TTP (Tahreek Taliban Pakistan) conducted a deadly attack on an Army school in Peshawar and killed more than hundred students, COAS General Raheel Shareef visited Kabul the day after. The repetition of Shareef’s (COAS) visits to Kabul created a sort of mentality that Pakistan will support Afghan government in the fight against Taliban. The beliefs increased when Raheel Sharif promised Kabul that Taliban will joint peace talks with Gani’s government.

It has been said that Paksitan asked some Taliban leaders to talk to Kabul, but Taliban refused. Pakistan either is not ready to assist Ghani’s government in peace talks with Taliban or it cannot do what Kabul expects. Based on some solid reasons, the second possibility seems more likely. Therefore, during the last March, some Pakistani media released reports that Qari Din Mohammad Hanif, member of Taliban Qatar office visited Pakistan. Afghan media then, in order to prove the role of Pakistan workable, they have widely quoted the reports.

Whenever Pakistani officials, especially the military leadership visited Kabul, hopes of peace emerges in Kabul. In return, Pakistan by using its powerful media, published some false reports and showing its own role. The Afghan government has not understood yet the game played by Pakistan.

Can “B Plan” Change everything?

During former President Hamid Karzai’s rule in Afghanistan, the relations with Pakistan faced many ups and downs. Karzai was of the opinion that Pakistan owns the key of peace and war in Afghanistan. The former president reiterated the same sentence in his Farwell event.

Since the formation of National Unity Government (NUG) in Afghanistan, President Ghani tries to make his relations in the region based on the economy. Ghani wants to put economy in top priorities in relations with neighbors. From the other side, Ghani thinks that Afghanistan will gain the role of bridge in the Asia through regional economic integration. Therefore, head of Strategic Studies center in foreign ministry of Afghanistan, Dr. Faramarz Tamana thinks: “the available economic capacity in Afghanistan can make economy the base of our relations. Moving from security phase to that of economy is the new Afghan policy towards Pakistan.”

Tamana is of the opinion: “’A Plan’ could not reach us to our goals during the last thirteen years. We need peace and the key of peace is with Pakistan.”

Afghanistan, therefore, choose “B Plan” that it would help to get Pakistan’s cooperation. “The economization of relations is for this purpose.” Said Tamana. The Afghan government makes a repetitive mistake that it calls the “key of peace with Pakistan”. Pakistan attained a lot from this credit. Even now, the Afghan government easily becomes hopeful of Pakistan.

Till the Afghan government itself sort out the root causes of insecurity in the country and remove all of them, hopes from traditional foes may not have any positive result. The NUG from one side acts against peace and then hopes from Pakistan to cooperate in this regard. The route of peace does not pass through Islamabad, only. There are some honest routes of peace that Afghan government can easily utilize.

Both the Shareefs visited Afghanistan in a time that Raheel’s March promise has already been expired. In last meeting, instead of discussing the reasons of not convening any peace talks in March, the NUG continued its hopes from Pakistan.

First: Afghanistan has always expected Pakistan things that largely out of Pakistan’s capacity;

Second: Pakistan has already propagated regarding its role in peace process of Afghanistan. It has exploited such a scenario to the large extent;

Third: The role given to Pakistan by Afghan government is now a tool in the hand of Pakistan;

Fifth: Keeping in view political office of the Taliban, it seems that the group is trying to make itself free from the leverage of Pakistan; and

Sixth: The Afghan government still moves the direction it has had during the last thirteen years.