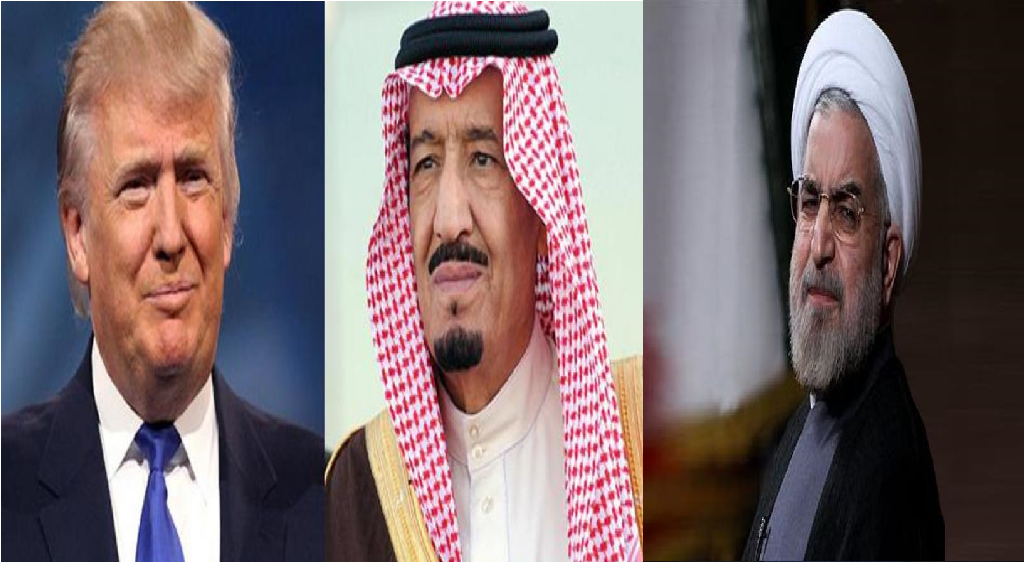 Speaking at the gathering of around 55 Muslim countries, the US President Donald Trump and the Saudi Arabian King Salman called Iran a terrorist supporter last week and reiterated to confront the measures undertaken by this country.

The US and Saudi Arabia accused Iran of destabilizing the region and the world at a time that in the Friday Elections (19 May 2017) in Iran, Hassan Rohani was elected for the second time as Iranian President. In response to Trump’s remarks, Iranian Minister of Foreign Affairs Jawad Zarif has said the US, which was the born place of democracy, had criticized Iran-which is a country that has just passed a democratic election.

The US and Saudi Arabia have old economic and military ties. The US is one of the primary customers of Saudi’s oil while Saudi Arabia is a key buyer of US weapons.

In addition to oil, another factor in the bilateral relations between the two countries was opposition against communism. After the World War II, communism and capitalism, two opposing ideologies, stood against each other. The former Soviet Union was leading the communist side, and the US was leading the capitalist side and Saudi Arabia, on the other hand, was a country that, due to its religious structure, opposed communism. Hence, Saudi Arabia and the US were allied.

Although during the Israel-Arab war in 1973, Saudi Arabia used its oil as a weapon and issued oil bans on the US, even these sanctions did not deteriorate relations between Washington and Riyadh.

After 1979, there were some common points in US-Saudi relations that prevented the US-Saudi alliance from falling apart. After the Soviet invasion of Afghanistan, both Saudi Arabia and the US supported the Afghan Mujahidin. In 1991 when Iraq under Sadam Hussain invaded Kuwait, Saudi opposed the invasion and allowed the US presence in its soil.

Overall, during the cold war and after that, the US and Saudi Arabia had strategic relations which were based on containment of communism, oil, Islamist groups, and the threat posed by Iran, especially its nuclear program. However, after the 9/11 incident in 2001, since most of the attackers were identified as Saudi citizens, relations between the two countries come to lower levels and the deterioration of relations between the two nations during the second term of Barack Obama is due in large part to various reasons including the nuclear deal with Iran.

After Trump seized power in the US, despite the earlier concerns, now it seems that some common factors such as economic and weaponry agreements and opposition with Iran have improved relations between the two countries.

In addition, when in 1973, Saudi Arabia and other Arab nations used their oil as a weapon against Israel and Western countries, Iran did not do the same. Moreover, Iran’s investment on its military and purchasing of new weaponry further inflamed tensions between the two nations because Saudi Arabia was concerned about Iran’s expansion of influence in the region. In the meanwhile, in the cases of controlling the expansion of communism and opposing Gamal Naser, the two countries had similar stances.

After the Islamic revolution in Iran in 1979, the new government was established based on Shiite ideology and, from that time on, Iran appeared as the founder and protector of the interests of Shiites in the world. On the other hand, the revolutionary leaders of Iran undertook the policy of complete opposition to the West and, in the meanwhile, condemned monarch states in the Islamic world. Thus, the opposition between Iran and Saudi Arabia began, and the two countries faced each other ideologically. Later-on the Iran-Iraq war and the killing of hundreds of Iranians, who had come to Saudi Arabia for Haj had profoundly impacted relations and following the storming of Iranian protestors on the Embassy of Saudi Arabia in Tehran, where one Arab diplomat was also killed, relations between the two countries were severed.

Tensions began to ease again when Khatami and Rafsanjani traveled to Saudi Arabia, and in 1997 Malik Abdullah went to Iran to participate in a conference. Recently, the countries have signed an agreement as well. In 2007, the countries called each other “brothers”. Mahmood Ahmadi Nezhad traveled to Saudi Arabia, and Malik Abdullah personally went to the airport to welcome him. However, later, due to the issue of Arab Spring and Iran’s nuclear program, relations between Riyadh and Tehran deteriorated, and Saudi asked the US to attack Iran and destroy Iran’s nuclear program.

Official relations between the US and Iran began in 1883 when the US opened its consulate in Iran. During the First World War when Russia and British violated Iran’s neutrality, the US, whose slogan was to support the rights of weak nations, established “the aid committee for Iran”.

After the Second World War, the US seemed friendly to the Iranians, because Iranians were exhausted by Russians and British and they saw the US as a third party that could, to some extent, serve the interests of Iran. On the one hand, the US supported Iran’s demand for independence and, on the other hand, did not want the independence of its oil reserves.

In 1979 with the Islamic revolution in Iran, due to its interference in Iran’s internal affairs, the US had lost its soft power in Iran and faced the slogans of “Death to the US”. After the Islamic revolution in Iran, Iranian King went to the US in response to which people stormed on the US Embassy in Iran and captured it. The US, on the other hand, undertook some anti-Iranian measures as well and first of all severed its political and military relations with Iran and issued sanctions on Iran.

In recent years, especially in the second term of Barak Obama’s presidency, the nuclear deal between the West and Iran has eased tensions between the two countries. However, with Trump’s success in US elections relations between the two countries have, once again, begun to deteriorate. Even from the beginning, Trump opposed the nuclear deal with Iran, and now Trump’s remarks in Saudi Arabia further clarifies his anti-Iranian stance.

After the Second World War, the countries located in this region gained their independence at a time that could war between the US and the Soviet Union had already begun and competition between the two rivals had reached its peaks. Due to vast oil reserves, strategic straits and the rise of the Islamic movements, this regional has attracted the attention of the world particularly the US.

In the aftermath of the Second World War, the US countered issues such as the fight against extremism, Iran’s nuclear crisis, the issue of oil, Iraq, and Libya in the Middle East. However, currently, war in Syria, Iraq, Yemen…and Iran’s nuclear crisis are the mean challenges in this region. The US, Russia and the EU are the international players that are engaged in the crisis in this region along with regional powers such as Iran, Egypt, Turkey, Israel and Saudi Arabia.