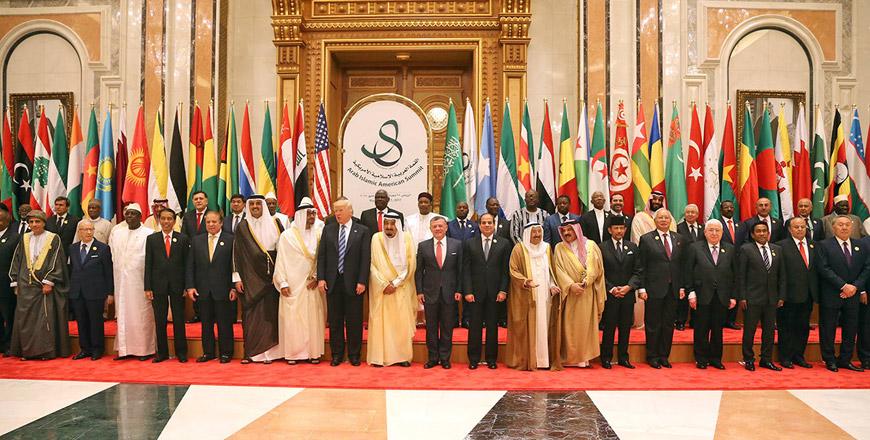 On 21 May 2017, the “Arab-Islamic American Summit” was organized in the capital of Saudi Arabia, Riyadh where most of the Muslim countries’ leaders attended. An important participant in this meeting was the US President Donald Trump who delivered the keynote speech besides the Saudi King Salman.

Except for Iran, Syria and some Central Asian countries, almost all Islamic countries (around 55 countries) had attended the conference. This gathering in Riyadh had three parts. First, the bilateral meeting between the US and Saudi Arabia; Second, the conference of Gulf Cooperation Council and the US; and the third, was the Arab-Islamic American conference.

The primary purpose of the summit was to discuss the fight against extremism and “terrorism”, but what are the anti-terrorism policies of the US and Saudi Arabia? What happened in the 2017 Riyadh Summit? What is the impact of this pivotal political event in theIslamic world and particularly Afghanistan? These are the questions that are analyzed here.

The US and Saudi Arabia’s counter-terrorism policies

Although “terrorism” is a vague term and does not have a precise definition, many agree that it is the use of violence, especially against civilians, in the pursuit of political, religious and ideological aims. The term is mostly used to label the non-governmental individuals and groups, but some states clandestinely back most of these groups. The counter-terrorism policies, however, is the military and security tactics and technics undertaken by government organs to prevent or eliminate “terrorism”.

The first “anti-terrorism” policy was undertaken in the 19th century in the United Kingdom, where the British Minister of Interior Affairs formed a special counter-terrorism unit to prevent and control the Irish freedom fighters. Later-on, the countries largely relied on intelligence services to tackle terrorism and terrorist incidents. Therefore, powerful intelligence bureaus were created in most of the countries, but gradually terrorism and terrorist incidents became more and more complicated, which followed by the change in counter-terrorism strategies as well.

During the cold war, the US counter-terrorism strategies mostly relied on intelligence services, but then it undertook policies such as enhancing the capacity of security forces, passing some laws, creating some administrations, forming anti-terrorism units within the existing administrations, bringing reforms in the banking systems so that the financial resources of terrorists be frozen, etc. In the post-2001 years, the attack on Afghanistan was also carried out under the fight against terrorism. Under the same strategy was waging war in Syria and Iraq.

On the other hand, after the terrorist attack during the pilgrimage (Haj), Saudi Arabia also largely relied on its spy bureaus. Following Al-Qaeda’s attacks in the Middle East, Saudi Arabia, to a greater extent, tried to freeze Al-Qaeda’s assets. However, after 2001, these efforts were increased, and Riyadh sought to uproot the financial resources of “terrorist groups”. In this regard, in Donald Trump’s recent trip to Saudi Arabia, the US and the Gulf Cooperation Council signed an agreement as well.

The summit in Riyadh was divided into three conferences. First, the US-Saudi Arabia bilateral meeting, where the US and Saudi Arabia signed a $350bn trade agreements. In these agreements, $110bn was in areas of military and defense which includs in providing tanks, airplanes, missile defense system particularly radar system and cooperation in areas of cyber security.

The second conference was organized between the US and Gulf Cooperation Council. During this meeting, the US President met the leaders of the council and discussed the issue of stability, security and Iranian influence in the region as well as the issue of Yemen. Before this conference, to cut the financial support for “terrorism”, an agreement was signed between the US and Saudi Arabia.

The third meeting was between the Arab-Islamic Countries and the US where the leaders and representatives of 55 countries had participated. In this meeting, the Saudi King and the US President Donald Trump give keynote addresses. The participants of the conference emphasized on such cooperation that either prevents or removes the increasing threat of extremism and terrorism and supplant it with moderation and tolerance.

Some of the impacts of this summits on Islamic world and Afghanistan is analyzed bellow:

The US-Saudi Arabia ties; in the past years especially in the second term of the former US President Barrack Obama relations between the US and Saudi Arabia was deteriorated. Now, Trump’s travel to Saudi Arabia could have deep impacts particularly now that the two countries signed $350bn agreement in areas of economy and security. In the meanwhile, in his speech to the participants, Donald Trump used harsh rhetoric against Iran.

The effort to reduce Islamophobia; before seizing power in the US, Trump’s remarks regarding Islam and Muslims had concerned the Muslims around the world. Trump’s assigning of Islamophobic individuals (those who have unjustified fear from Islam) in the White House and banning of migration from seven Muslim countries further increased these concerns. But Trump began his official trip overseas from the heart of Muslim world and was moderate in his speech and, in other words, was not the Trump he was before. However, if one evaluates the issue, one can say this behavior was mostly due to US’s anti-Iran stance and economic and trade agreements with Saudi Arabia. Trump’s position can be assumed changed only if he did not blame all Muslims in case a terrorist attack occurred in the US.

Extremism and “terrorism”;the Riyadh Conference is primarily aimed to fight against terrorism and extremism in the region. But the conference will be successful in this regard only if the term “terrorism and extremism” is clearly defined. However, if these terms remain unspecified and it was used to label some Islamists, it would have negative rather that positive impacts. The conference has paved the way for the signature of an agreement between the Gulf Cooperation Council and the USin order to eradicate the financial resources of terrorist groups and the “Global Center for Combating Extremist Ideologies” was also created in Riyadh.

The power balance in the Middle East; after the signature of the agreement between the US and Iran over Iran’s nuclear program, international sanctions on Iran was lifted which influenced the power balance in the Middle East. Riyadh was suspicious about the deal even from the beginning, and when it was signed, Saudi relations with the US deteriorated. However it is not clear whether the $110bn purchase of military equipments by Saudi Arabia would how much influence the balance of power, but it will certainly increase rivalry in the region and will further inflame Saudi-Iran proxy wars in other Islamic countries. On the other hand, criticizing Iran, Trump said in his speech that some countries are supporting terrorism.

The opposition between Sunnite and Shiite; among the Islamic countries, Iran mostly represents Shiite groups. In pursuit of Shiism, Iran interferes in Syria, Yemen, Lebanon and Iraq and hence supports Shiites. In some other countries, however, instead of interference provides financial, economic and cultural contributionsfor them. Since Iran was not invited to the conference and in the meanwhile, the US President and Saudi King fiercely criticized Iran, the opposition between Sunnites and Shiites will further deepen.

Afghanistan; after the formation of the National Unity Government (NUG), Kabul-Riyadh relations improved; but these relations were rather based on promises. The Afghan President Ashraf Ghani had also participated in the Riyadh Conference to strengthen relations with Saudi Arabia and to meet the senior US and Saudi officials. But the issue of Afghan workers’ passport in Saudi is still unsettled. Also, although, in his speech, the US President praised the Afghan forces, his not meeting Afghan senior officials was a negative point of the trip.