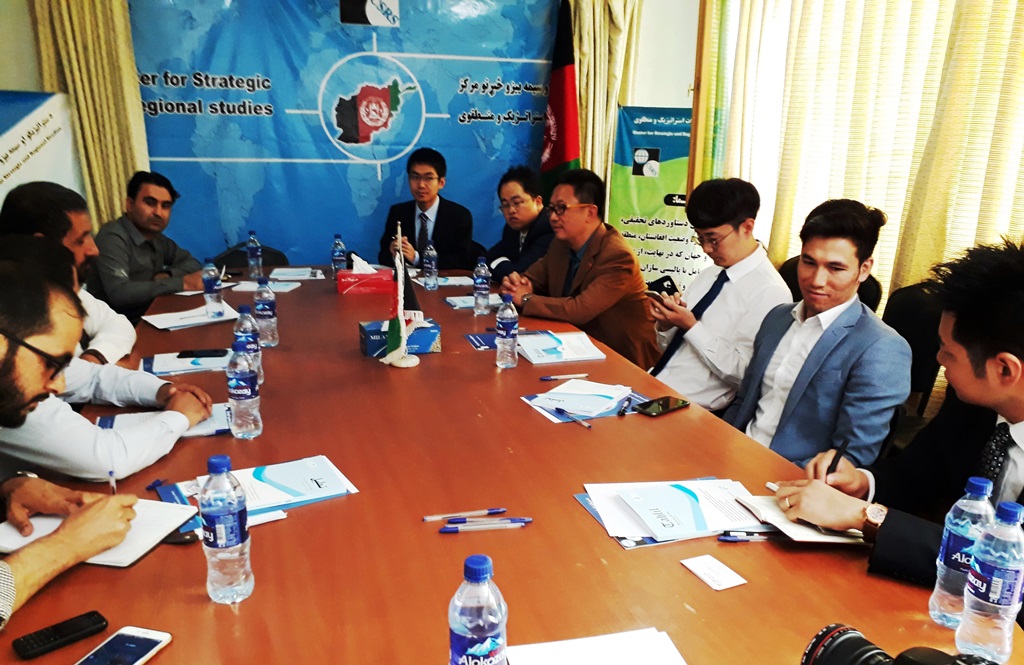 A delegation of the Chinese researchers, who have come to Kabul in coordination with the Chinese Embassy in Afghanistan, met the leadership and members of the Center for Strategic and Regional Studies (CSRS) in its central office.

In this meeting, on 22 August 2017, they discussed the situation in Afghanistan and the region particularly the Kabul-Beijing relations and they also shared opinions regarding paving the way for the bilateral cooperation between the Chinese research centers and CSRS.

After welcoming the Chinese delegation, the General Director of CSRS Dr. Abdul Baqi Amin said “China is a sincere friend and an important neighbor for Afghanistan; that is why the bilateral relations between the two countries is one of our focused area of research. We have written a comprehensive book about the Afghan-Sino ties, which will soon be published in 400 pages.”

He added, “Currently, the most important issue for us is peace and the stoppage of the war in Afghanistan, and we hope that China will play a constructive role in this regard.” Mr. Amin also said that, in this respect, the civil societies could play a significant role and that, therefore, they have worked in this area and that it was one of the main areas of their research. The chairman of CSRS stated, “Afghans are tired of war and given this need, we expect that a research center in China in cooperation with CSRS will provide the way for such a meeting that would bring together all the engaged parties in the Afghan war. This initiative will help the governments to walk the path of peace constructively.

Head of the Chinese delegation and head of the Center for South Asia Studies at the Chinese Academy of Social Sciences Ye Hailin thanked CSRS for inviting the Chinese delegation and said that they focused on how to improve relations between Kabul and Beijing. He stated that they prioritized economic activities but peace and stability was a precondition for every activity. Mr. Hailin said “Afghanistan is one the important neighbors of China and stability in Afghanistan is very important for China. Therefore, China is inclined to help in the Afghan peace process.” He said that he would discuss with the relevant authorities to organize a meeting regarding the Afghan peace process.

In response to a question by the Chinese delegation regarding the new US strategy, head of CSRS Dr. Abdul Baqi Amin said, “We do not believe that the new US strategy is in the best interest of Afghanistan. In this strategy, the date of the US withdrawal and the number of their US soldiers are not specified. While the long-term presence of the US in Afghanistan is not in the interests of Afghanistan and the region and will prolong the war in Afghanistan, the US wants the continuation of the war in this country. This war will not end with deploying more soldiers. On the other hand, the US has indicated in its new strategy that they do not care about governance in Afghanistan and that they will focus on the war.”

At the end of the meeting, the two sides agreed to sign an agreement regarding bilateral cooperation between the research centers and the Chinese side pledged to share their final thought in this regard as soon as they returned to China.