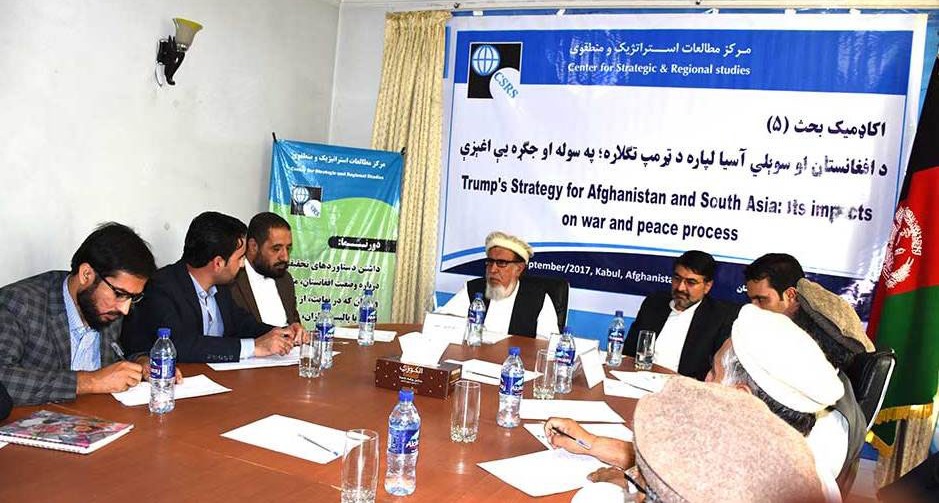 In its new policy, the US decided to continue the war and dispatch new soldiers in Afghanistan. At the regional level, in this policy, Trump utilized harsh rhetoric against Pakistan and emphasized on increasing the role of India in Afghanistan.

Since the long-term presence of the US in Afghanistan and the US strategy in this country have a significant impact on the current and future situation in Afghanistan, the Center for Strategic and Regional Studies (CSRS), in the follow-up of its series of academic debates, discussed this issue on 26 September 2017. The meeting was held in the central office of CSRS where dozens of academic personalities had participated.

Head of the Peaceful Revolution of Afghanistan and politician Dr. Faruq Azam, member of the Parliament and head of the Khatam-u-Nabiyen University and lecturer of political science Dr. Abdul Qayum Sajadi, lecturer in Kabul University Asadullah Wahidi and the General Director of the CSRS Dr. Abdul Baqi Amin delivered their speeches regarding the various aspects of the issue.

The first speaker Dr. Faroq Azam delivered his speech about the impacts of the new US strategy for peace and the war in Afghanistan. Mr. Azam said, “Trump has inherited this war from his predecessor Barrack Obama. When in 2009 the situation got intense, Obama consulted his administration, and they advised him that since the Taliban were part of the Afghan nation, it could not be eliminated but could be weakened. Therefore, Obama sent 30 thousand new soldiers in Afghanistan, raising the total number of NATO and US forces in Afghanistan to 150 thousand troops. Obama had told his generals that if the fate of the war was not decided within three years, he would withdraw from Afghanistan. When Obama decided to pull out his forces from Afghanistan, he forgot about the political reconciliation. Hence, Obama handed over the responsibility of the war in a vague status to President Trump.”

According to Mr. Azam, since Trump is a businessman, he has always opposed the Afghan war and has termed this war as a senseless war and has always criticized the US expenditures in Afghanistan. Finally, two months earlier on July 19, Trump discussed the issue of Afghanistan in details, and at the end, he decided to remain in Afghanistan which he announced in the framework of his new strategy on August 22, 2017.

Mr. Azam says that the US believes that it cannot defeat the Taliban but can weaken them and that therefore, it should be discussed whether how much could they be weakened. Therefore, based on the new strategy, the US will deploy some troops in order to enhance the morale of the Afghan armed forces.

Mr. Azam said that the Americans had a consensus to remain in Afghanistan, but they wanted such a government in this country that did not oppose their plans and policies.

Azam said, “The Americans would point their fingers towards Pakistan before this as well, but Trump only revealed it. Another element that was not raised before was India, and Trump said that now they would not observe Pakistan’s sensibility towards India.”

“Although Pakistan needs the US, it could also put pressure on this country. If the US wanted to implement the ISIL project in Afghanistan or if it wanted to extend its influence in the Central Asia and as long as it has a military presence in Afghanistan, the US needs Pakistan. All the military supplies of the US soldiers in Afghanistan is through Pakistan. On the other hand, Pakistan can form a threatening coalition with Russia, China, Iran and some other countries and has the opportunity to maneuver,” said Mr. Azam.

In regards to the peace talks, if the Afghan government sincerely wants to resolve the crisis, there is a relative opportunity because for the first time an American President (Trump) reiterated on the necessity of peace and security in the region. However, the most important issue is that how can we use this point for our benefit.

The second speaker of the meeting Dr. Abdul Qayum Sajadi spoke about the internal and regional impacts of Trump’s strategy. He said, “The main axis of the new US strategy is its national interests. The first point in this regard is to maintain the US supremacy in the world. The second is US’s control over the economic wealth of the world. The third is making trouble for its international rivals. The fourth is the safety of the Americans. Moreover, it has other aspects such as defending democracy and human rights, which are the nicest parts but never their priorities.”

Making trouble for China, Russia, Iran and some other countries that could threaten the US interests internationally is one of the main interests of the US so that the US could control these countries. In US’s regional interest, its control over Afghanistan is very important because Afghanistan is the crossroad between the Middle East, South Asia, and Central Asia, the key energy-rich region in the world. It was for the same reason that even during the Taliban regime, international companies of energy such as Unocal and Bridas was active here.

The US’s interests in Afghanistan, however, is what they call achievements which are the Afghan constitution, reconstruction, education, etc. They do not want these achievements to be threatened so that they could convince the American tax-payers; however, they mainly work for their major goals and interests.

“In the new US strategy, one noteworthy point is that the date of the withdrawal of the US troops from Afghanistan is not specified. Trump said that the US would determine based on the analyzing of the situation and not based on a specified date. That is why, I think as long as we do not struggle for ourselves and as long as there is not a political consensus among us, we cannot get out of the current crisis,” he said.

The third speaker Assadullah Wahidi delivered his speech about the differences between the old and the new US strategy in Afghanistan. “We can better analyze a strategy only when we know the objectives of that particular strategy. The thought that the US is here to fight “terrorism” is now ridiculed by everyone because now it is clear that the US would have come to this region even if the 9/11 incident had not occurred,” he said.

Mr. Wahidi said that since 2001 all the focus had been on the war and genuine peace had been ignored and that Afghans were just amused with the surficial peace. In the meanwhile, in this period the circumstances were kept in a way that led to a weak government in Afghanistan that could not make deals on its own.

According to Mr. Wahidi, several points have been stressed upon in the new US Trump. First was nation-building in Afghanistan which Trump explicitly said he would not address it because the Americans believe that if the Afghan government was strong enough, it could end the war which is not in the interest of the US. On the other hand, nation building requires time and expenditures.

Second, comes the issue of control. Until 2012, the US did not see the Taliban as a threat. However, when Russia got involved in Afghanistan and threatened them, Trump said that the Taliban were the US’s enemy and that they would eliminate them. That is why Mullah Akhtar Mohammad Mansor was targeted. Akhtar was coming from Iran, and by killing him, the US tried to cut the relations between the Taliban and Iran and Russia. Therefore, the Americans want the continuation of the war, but they want to have it under control.

The third was the issue of the military bases in Afghanistan which they wanted for controlling the war in this country. Fourth is the issue of India. Emphasizing on India in his speeches, Trump was not trying to urge Pakistan to help the process of peace and stability in Afghanistan, but rather it was to deal with China.

“Overall, no fundamental change is brought in the new strategy. It has only entered a new phase. The main policy of the US is the war and game of intelligence. That is why recently violence is accelerated. For instance, sometimes the Americans bomb wedding ceremonies, sometimes they carry out airstrikes on death ceremonies, and sometimes they explode some other gatherings of civilians,” Wahidi said.

The fourth speaker of the meeting the General Director of CSRS Dr. Abdul Baqi Amin spoke about what Afghans should do in the current circumstances. Mr. Amin said that the Afghans must consider the following three points in order to serve their interests. First, struggle to end the war. Second, efforts to become self-sufficient because when a government does not have financial independence, it cannot have its own complete free will. The third is the need to a coordinated and stable government in Afghanistan.

Moreover, Amin says that Afghanistan must keep the balance in its relations with neighboring countries and that that is why he thinks the current approaching to India is not in the best interests of the country.

“The Afghan public also bears a responsibility in the current critical situation in the country, and they must hold some steps to save themselves and their countries because now is a time that even the Afghan Parliament is involved in the activities of the mafia as well as in corruption. If Afghans are waiting for foreigners to end the war, they are making a mistake because the war will not stop as long as the parties of the war are not pressurized,” he said, “we still need a strong and sincere mediator to mediate among the different parties of the war.”

At the end of the meeting, the participants asked their questions from the members of the panel.