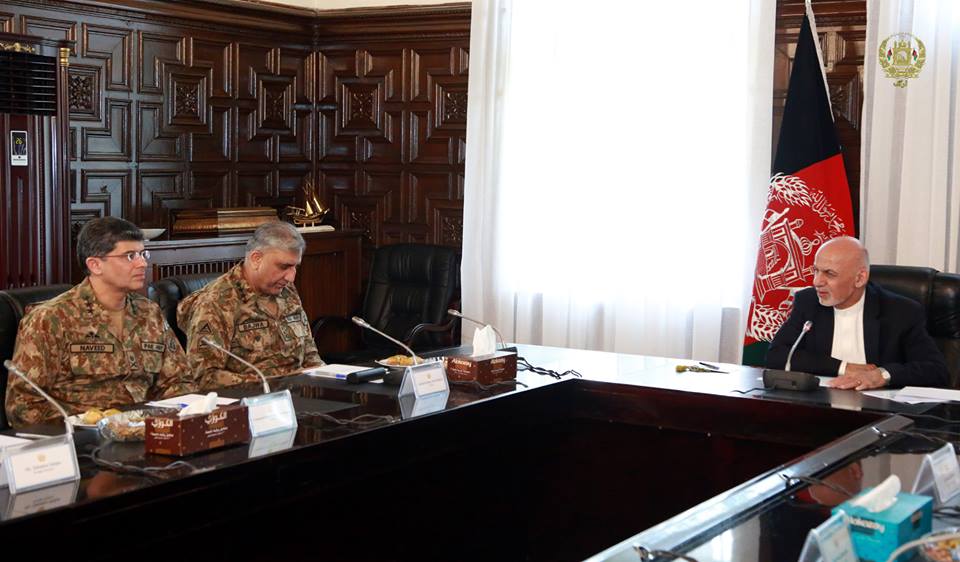 The Pakistani Chief of Army Staff General Qamar Bajwa at the head of a senior Pakistani officials visited Kabul last week and met the Afghan President Ashraf Ghani and other senior Afghan officials.

Bajwa travels to Kabul at a time that, on the one hand, a little more than one month ago, Donald Trump announced the US strategy towards South Asia and Afghanistan and, on the other hand, since a while Kabul-Islamabad ties are marred by mistrust and suspicion.

What is the purpose of Pakistani Military Chief’s visit to Kabul? Will such travels improve the relations between the two countries? These are the questions that are analyzed here.

The beginning of the Kabul-Islamabad ties was not constructive that is why since the past seven decades, relations between the two countries were a scene of distrust and suspicion. Although in the beginning, Afghanistan did not recognize the Pakistani government in the UN due to its border issues, and the Afghan government still does not recognize Durand Line, Afghanistan called on the people of Khyber Pakhtunkhwa to make the final decision. Nevertheless, during the two Indo-Pak wars, Afghanistan remained impartial.

Pakistan’s Afghan policy in the past seven decades is rooted in the fear that a strong emerging Afghanistan is a threat to Pakistan. Therefore, Pakistan seeks strategic depth in Afghanistan in order to neutralize both this concern and the formation of a coalition between India and Afghanistan. Hence, the main reason behind the mistrusts between the two countries is Pakistan’s early concern and fear.

Before this, during the presidency of Barack Obama in the US, the Islamabad-Washington relations were deteriorated in two occasions; first, when the US conducted operations in Pakistan against Osama bin Laden, Second, when the US forces attacked the Selala base and killed some Pakistan soldiers. In response, Pakistan blocked the supply routes of NATO for several months. Nonetheless, with Trump coming to power in the US, pressures on Pakistan have increased. Therefore, now Pakistan does not see itself as a US partner in the region and, in order to fill the void, it is more and more approaching to China and Russia.

On the other hand, although Pakistan rejects the existence of such armed groups in its soil that are active in other countries, in an unprecedented move, the BRICS organization, in which the strategic partner of Pakistan China is also a member, condemned the activities of the Afghan Taliban and Haqqani network as well as Jaish-e-Mohammad and Lashkar-e-Tayiba in Pakistan. Therefore, international pressures on Pakistan is gradually increasing.

Given the points mentioned above, Pakistani Military Chief’s visit to Kabul can have the following purposes:

First, one of the reasons behind this trip is to decrease the increasing international pressures on Pakistan.

Second, based on the new US strategy in Afghanistan, the US is seeking to increase India’s role in Afghanistan; therefore, another motive behind the trip could be to share Pakistan’s concern in this regard with the Afghan government.

Third, this trip may also pave the way for the exchange of prisoners between the two countries and in a second move to the resumption of peace talks with the Taliban.

The Afghan government in its statement and the Afghan Ambassador to Pakistan on his Twitter account has welcomed Pakistani Military Chief’s trip to Kabul. The Afghan government has termed this visit and meetings during this trip as “constructive”. Overall, this travel had the following three achievements:

First, it was an ice-breaker in Kabul-Islamabad’s frozen relations.

Second, it will help decrease international pressures on Pakistan.

Third, it facilitated a systematic order in increasing the cooperation between the two countries in various areas.

Despite all these, the Afghan government’s expectations will, to a greater extent, be practical steps by Pakistan because in the past three years Pakistan has made big promises but have most of the time failed to fulfill them which has led to the deterioration of relations between the two countries.