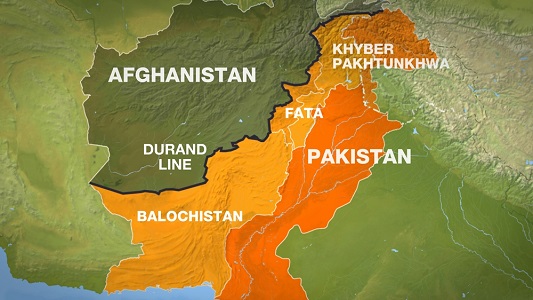 In response to the remarks of the British Ambassador, the Afghan Ministry of Border and Tribal Affairs said: “There exists no official document proving the credibility of the Durand Line and such remarks are against the diplomatic norms.” Issuing a statement, the Afghan National Security Council has also called on all foreign Ambassadors and political representatives resident in Afghanistan to respect the rights and the historical and national values of Afghanistan-including the Durand Line. Condemning the comments of the British Ambassador, the Afghan Senate has termed it the evident interference in the internal affairs of Afghanistan and British conspiracy in the region. The Afghan Senate also accused the Afghan government of being silent against Pakistan’s act to fence the border with barbed wire.

Here you would read about the background of the Durand Line, the impact of the issue on Kabul-Islamabad ties, and the outcomes of fueling this issue at current circumstances.

After Pakistan’s Independence in 1947, the areas on that side of the Duran Line was came under the control of Pakistan as Tribal Administered Areas. However, this line is never recognized by the Afghan government and some reputable parties on that side of the border. That is why in September 1947 when Pakistan intended to gain the UN membership, Afghanistan was the only country that opposed it.

After the formation of Pakistan, the issue remained as a permanent issue between the two countries and has always affected Pakistan’s policy towards Afghanistan. The Durand Line is also the reason why Pakistan seeks to gain “strategic depth” in Afghanistan.

Why the Durand Line is not acceptable for Afghanistan?

The Durand Line, drawn when India was a British colony, is not yet recognized by Afghanistan. Afghanistan has reasons for with convincing answers are not given:

First; based on the researches of Hassan Kakar, the known Afghan historian, in the archives of Delhi, London and Kabul, there is no document in English or Persian proving the line singed by Amir Abdul Rahman Khan.

Second; the historical evidences show that Amir Abdul Rahman Khan has edited a map of the Duran Line but still he has not signed it.

Third; sending several letters to British between 1895 and 1897, Amir has expressed his opposition about some of the areas that the Duran Lind passed from.

Fifth; based on the Gandumak Treaty, between the second Anglo-Afghan War and the Independence war, Afghanistan was a protected state and its foreign policy was controlled by the British. Therefore, the Afghan government did not possess the authority to sign such an agreement at the time.

Sixth; if the Durand Line Agreement was eligible as an “agreement”, why was it not approved by the British Parliament or the Afghan Loya Jirga?

Seventh; if it was a permanent agreement, why did the British renewed with every new king coming to power in Afghanistan. In the research of Hassan Kakar as well, the agreement is termed a temporary agreement.

Eighth; During the signature of the Durand Line agreement, there was no country by the name of Pakistan and after the withdrawal of Britannia from India, the Indian Subcontinent was divided into two parts, India and Pakistan; therefore, Pakistan is not the eligible successor of British and its legal rights, even if signed by Amir Abdul Rahman Khan, does not transfer to Pakistan.

Ninth; at that time, the British was concerned about a Russia invasion on the one hand, and Abdul Rahman Khan’s interventions on the other hand. Therefore, this agreement was signed to specify the spheres of influence of the British and Amir and not as an official border.

Tenth; the referendum conducted in the Khyber Pashtunkhwa after the creation of Pakistan is presumed in valid for the following reasons; first, only 51% of the voters had participated and the valid and invalid ballots were not distinguished. Second, most of the Hindus who were eligible to vote had migrated to India. Third, in the elections in 1939 and 1945, the movement of “Congress and Khudayi Servants” under the leadership of Doctor Khan had won the election and Muslim League with the agenda of forming Pakistan lost the elections.

The Kabul-Islamabad ties under the influence of the Durand Line

The border disputes between Afghanistan and Pakistan in the past several decades has raised tensions between the two countries, which still prevails.

After the collapse of Dauod Khan’s government and with the formation of the Khalq regime and later-on with the Soviet invasion of Afghanistan, the country was weakened in every aspect; during the Jihad against the Soviet Union; the Mujahidin government; civil war and the Taliban regime, no Afghan government recognized the Durand Line.

After 2001, in both terms of the Karzai’s Presidency, the issue of the Duran Line hand influenced the relations between the two countries. Karzai repeatedly announced that he does not recognize the Durand Line.

After the formation of the National Unity Government (NUG), tensions between the two countries escalated to a scale that even led to border clashes. The construction of the iron fences and barbed wire across the Durand Line, which has, in some areas, divided the villages into two parts have also escalated tensions between the two countries. Last week, the Afghan President Ashraf Ghani said in response to this act of Pakistan: “those who want to divide our people with barbed wire, must rethink about what they are doing.”

Is the issue of the Durand Line solvable?

Pakistan is using every means to force the Afghan government to accept the Durand Line. During the NUG, some of the Afghan politicians and civil activists in Afghanistan has spoken about the secret agreements of the government about the issue, particularly when Afghanistan and Pakistan reached an agreement to conduct a joint operation on the two sides of the border. Recently, some members of the Afghan Senate have accused the government of making deals with Islamabad about building fences across the border. However, the government has always rejected such allegations and has said that it was above their authority.

On the other hand, some countries are also making efforts for the line to be recognized. For instance, the Special Representative of the US for Afghanistan and Pakistan had said in 1391 that, “Durand Line is the official border between the two countries.” The US Ambassador to Afghanistan had confirmed his remarks and had said that “not only the US but also most of the countries know the Durand Line as the official border between the two countries.” Now, once again, the British Ambassador to Kabul has made the same comments.

Besides the continued efforts of Pakistan and the remarks of the foreign diplomats, some individuals and political circles within the country have also raised the issue of the recognition of the Durand Line. These individuals and circles believe unless this issue is settled, Afghanistan’s issue with Pakistan would not be resolved.

Given these efforts, one can say that the recognition of the Durand Line will not solve Afghanistan’s problem with Pakistan. First, although the recognition of the Durand Line by Afghanistan will end Pakistan’s concerns for ever, since Pakistan practically controls these lands, this issue is not that important for Pakistan. Second, the main problem of is to have a pro-Pakistan government in Afghanistan, in other words “strategic depth” in Afghanistan in order to control Afghanistan’s relations with India or at least the Kabul-Delhi ties must be more tenuous than the Kabul-Islamabad ties.

Therefore, given the circumstances in the region and the situation of the Afghan government, the settlement of this issue does not seem feasible. On the other hand, raising this issue will further escalate tensions in the relations between the two countries.