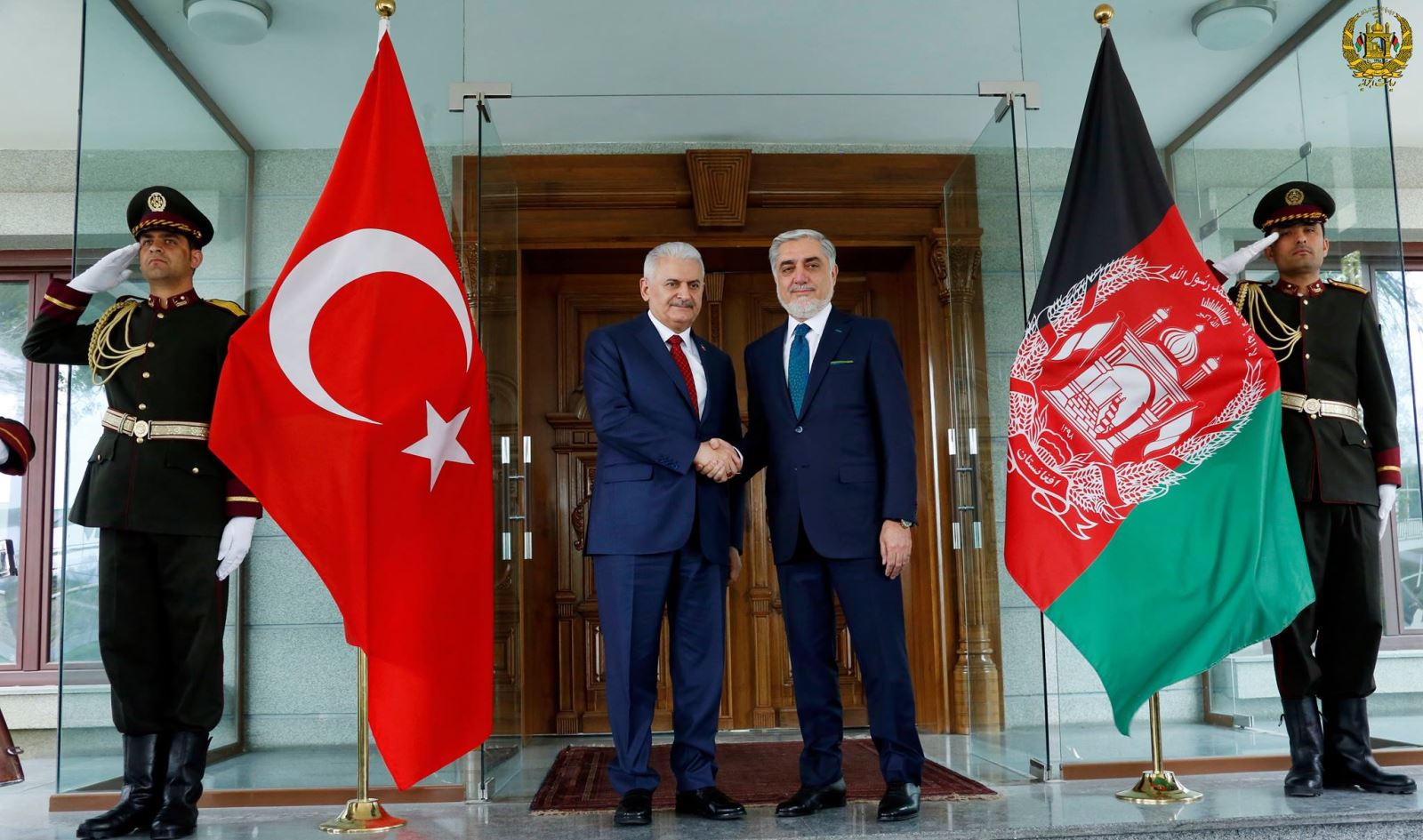 The best description of Afghanistan and Turkey ties was given by prominent Turkish politician Ahmet Davutoğlu who called it “Exemplary”  and said that even if the two countries do not “border”, but are close.

The importance of these bilateral relations is obvious from the visits of officials of both countries of which we can name the latest visit of Turkish premier, Binyali Yildirm to Kabul. He travel to Kabul last week (April 8, 2018) and met President Ghani, Chief Executive Dr. Abdullah and other Afghan officials and held a joint press conference with the Chief Executive.

The background of Kabul-Ankara historical ties, the political, economic and cultural relations of both countries and the future of these bilateral relations are analyzed here.

The diplomatic relations of Turkey and Afghanistan starts after signature of Turkey-Afghanistan Union Agreement in 1921; but from the historical perspective, it would be enough to say that some great personalities had traveled from Afghanistan to Turkey and/or from Turkey to Afghanistan, but mentioning Mevlana Jalaluddin Balkhi Rumi would be of value.

In the modern history, Afghanistan was among the first countries which officially recognized Turkey and it was during Amanullah Khan’s era where the first embassy of Afghanistan became inaugurated in Turkey. On the other side, Turkey supported the Afghan Jihad and remained impartial during the Civil Wars.

Turkey sent 400 soldiers to Afghanistan in NATO structure after 2001 who became involved in reconstruction acrivities and training Afghan military personnel; however, they never have had engaged in military operations and thus, Turks have not got any casulalities in Afghan war and so Afghan Taliban have also got soft position and treatment toward Turks.

Turkey played role in reconstructing bilateral ties of Afghanistan and Pakistan during Hamid Karzai’s term and held 8 trilateral meetings from 2007 to 2013. As this process, however, could not eliminate the long-last mistrust between Kabul-Islamabad, but it was beneficial to some extent and besides that, it was showing the great eagerness and friendship of Turkey towards Afghanistan.

The National Unity Government and Turkey

Nevertheless, some grounds of mistrust have also became created in relations between both countries since last year; because, from one side, First-Vice-President of Afghanistan, Gen. Dostum, spent a life of exile in Turkey and from the other hand, an opposition became declared by a number of Afghan politicians including Dostum in Turkey which initially operates against the National Unity Government.

The Visit of Erdoğan to Kabul after formation of NUG was somehow interlinked to Gen. Dostum who had took power as the First-Vice-President and thus, the deteriorated relations of Gen. Dostum and his exile to Turkey have had its impact on these bilateral ties. Afghan government took some measurements in order to eliminate this mistrust, and among them, we can refer the management issue of Fethullah-Gulen-related Afghan-Turk Schools.

Afghanistan and Turkey have had a bilateral business of totally 1.6 Billion Dollars between 2010 and 2016 whose largest portion was consisted of imports from Turkey and a small portion of its was consisted of exports from Afghanistan. Turkey rank fifth in importing more Afghan goods after India, Pakistan, Iran and Iraq.

Turkey has had active role in all seven meeting of Regional Economic Cooperation Conference on Afghanistan (RECCA) and on the latest conference which became held in November 2017, Afghanistan, Turkmenistan, Azerbaijan, Georgia and Turkey signed Lapis Lazuli Transit and Transport Route.

127 companies have realized 627 projects between 2003 and 2016, amounting to approximately USD 6 billion; however, the most important step is about Double Taxation Prevention Agreement (DTPA) on which the first round of talks became held in Ankara on June, 2016.

Nonetheless, economic and trade relations between Afghanistan and turkey have composed the very important portion in bilateral ties, but, unfortunately, the trade between both countries are on decrease year by year. It was USD 265 million in 2010 but it decreased to USD 155 million in 2016. Due to this, the second meeting of Joint Economic Commission (JEC) of both countries will be held in Ankara next month where Dr. Abdullah from Afghanistan will participate in it. The first meeting of this commission was held in April, 2005.

Turkey is a powerful country of Islamic World nowadays and thus its gives importance to its role in Afghanistan. Besides that, existence of Uzbeks and Turkmens in Afghanistan is also a reason that will impact the relations of both countries. Currently, Turkey follows the issue of Afghan government and Gen. Dostum closely and hence, this issue became discussed in meeting between Turkish Premier and Afghan Chief Executive and if this issue is not resolved, it, perhaps, would impact the relations of Turkey and Afghanistan.

Turkey, once again, will strain to play a role in construction of relations of Afghanistan and Pakistan. Because of that, the trilateral meeting of Afghanistan-Pakistan-Turkey in Ankara is planned. If the Qatar Office is not recognized as the negotiation ground between Taliban and Afghan government, it’s likely to transfer it to Turkey instead of Saudi Arabia or other countries, as Turkey has relative understanding with Taliban and good ties with Pakistan. Therefore, Turkey could play vital role in the Afghan Peace Process.

The future of Afghanistan and Turkey’s relations, besides politics, is also based on culture and economy. The trade between two countries, however, had faced some challenges in last year, but considering the latest efforts, it looks like that economic and trade ties between both countries are on the expansion and improvement.

Rivalry on leadership of Islamic countries between Turkey and Saudi Arabia is continuing on one side, and on the other side, Afghanistan have special important to Turkey. Therefore, Turkey’s involvement in the Middle East is on rise; but as Saudi Arabia loses its soft power in Islamic World gradually, Turkey’s economic development increases besides the increase of its soft power; so, the ties of Turkey is strengthening with Afghanistan in all of the aspects.