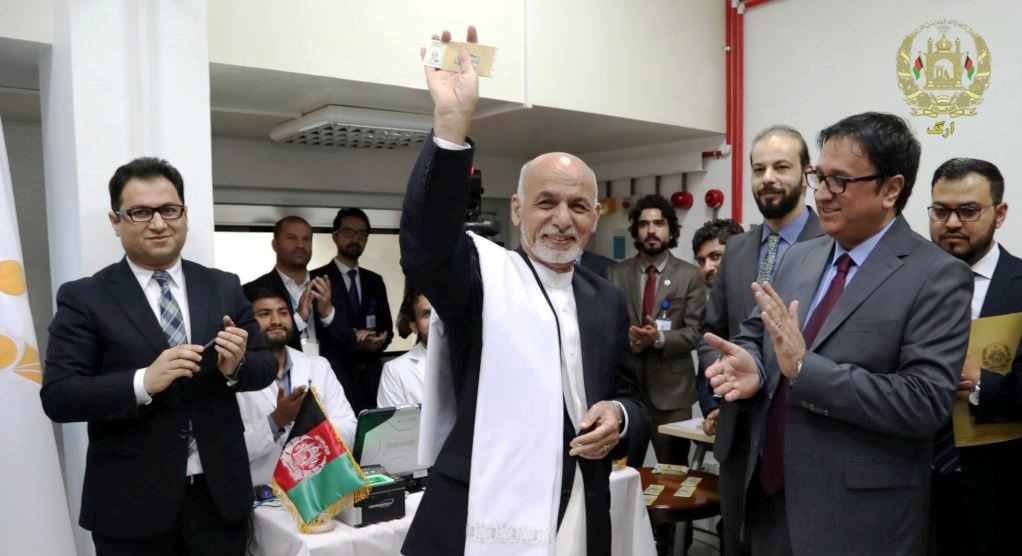 Distribution of Electronic Identity Cards (E-IDs), also known as E-Tazkira, had become delayed for three years just to have transparent and fraud-free elections in Afghanistan; however, besides this postponement, the election process became initiated without distribution if E-IDs and widespread fraud is being continued as the Paper Identity Cards (P-IDs) are distributed now.

Besides the issue of elections, this process might have been started already due to other rationale reasons; however, this process encountered barriers in past years and has faced with challenging obstacles now as well.

On May 3, President Ashraf Ghani officially inaugurated the E-ID distribution process by receiving first E-Tazkira, but an hour later, Chief Executive of Afghanistan, Dr. Abdullah Abdullah appeared in a press conference and opposed this action of the President.

The need and importance of E-IDs (E-Tazkira), the disputes in the process and the fate of the course of E-IDs are discussed here.

The E-ID distribution process in Afghanistan is considered as an initiative on regional level and it’s so important due to need and importance stated below:

The abovementioned points are so important and needed when it comes providing service based of electronic government (E-government), paying and collecting taxes, economic growth and development, policy-making and etc.

For the first time, practical work on E-ID project started in December 2010 as a result of contract that became signed between the Ministry of Communications and Information Technology (MCIT) and a private company named “GTR”, and it was planned to initiate the E-ID distribution process within eight month; however, this process did not became instigated due to unidentified reasons. [1]

In March 2012, then, for the purpose of partially starting this process, an agreement became singed between MCIT and Ministry of Interior (MoI), where it was specified that the E-ID distribution process will be started within six months; however, this process also did not began due to unknown reasons.

Apparently, one of the barriers behind implementation of this project was differences in the Population Registration Law which, however, had been approved by Wolesi Jirga [Lower House of Parliament] but former president did not sign it and left it to next president.

After formation of National Unity Government (NUG), President Ghani signed the Population Registration Law in December 2014; however, as the provision of article 6, ethnicity and nationality were not stated in Tazkira, so it faced disagreements and thus the process became more controversial.

At the end, President Ghani, after a lot of consults, ratified the adjusted version of this law as result of a legislative decree in March 2, 2017, where ethnicity, nationality and religion were included in Tazkira. Wolesi Jirga rejected this legislative decree and Meshrano Jirga [Upper House of Parliament] approved this degree and so a joint commission of both Jirgas became established which eventually approved this law; however, this problem is yet to become fully solved.

The Reasons behind Disputes on Electronic ID Cards

Mentioning or not mentioning nationality and ethnicity in E-IDs is an issue that has, apparently, encountered the distribution of E-IDs with delay and obstruction in Afghanistan. The opponents of writing of nationality argue that “Afghan” originally means Pashtun and writing Afghan as nationality for the entire people is fiction of identity. Considering the official position of Jamiat-e Islami Party, there is no need from writing ethnical identity and distraction of ID Cards under the banner of “Islamic Republic of Afghanistan” is enough. [2]

On the other hand, Clause 4 of Article 4 of the Afghan constitution clearly states that “The word “Afghan” shall apply to every citizen of Afghanistan”. Therefore, the proponents of enshrining the word “Afghan” in Tazkira say that this process has not got any juridical and/or legal problem and there is no need for consults in this regard. Thus, a day after the inauguration of this process, President Ghani told to a conference: “we do not discuss what kind of constitution should we have, but we argue to implement the constitution”. [3]

Another reason based on which the proponents of enshrining nationality in ID cards argue is that people living in the geography of Afghanistan are officially called “Afghan” since hundreds of years and everyone who live in the geography of Afghanistan is called “Afghan” on international level; hence, promoting the nationality of Afghanistani or Khurasani is a job “impossible”. Furthermore, different ethnics are identified with one identity in different various countries; i.e. different ethnics in Uzbekistan are identified as Uzbek, in Tajikistan as Tajik and in Turkmenistan as Turkmen and etc.

The Chief Executive of government, Dr. Abdullah Abdullah, during expressing his opposition against this measure, however, said that he is proud of his identity as “Afghan” and “Muslim”; but as there is no national consensus on this issue and the agreement is not made with him, so he called this process “illegitimate” and warned that continuation of this process will take the country into “crisis”.

Meanwhile, some politicians want to exploit ethnic and linguistic prejudice, especially this issue to order to campaign for themselves and increase their supporters. Therefore political leaders, in both sides, give provocative speeches.

Nevertheless, there is not any fear of anarchy or conflict seen due to the continuation of this process because there were many senior officials and national-political leaders; like chairmen of Wolesi Jirga and Meshrano Jirga, Batoor Dostum the son First Vice President Gen. Dostum, Faizullah Zaki minister of labor, social affairs, Second Vice President Sarwar Danish, Chief of the High Peace Council Karim Khalili, First Deputy of the Chief Executive, Engineer Muhammad Khan and some other important officials present in the inauguration ceremony of this process.

Looking at the social media, it looks the public opinion of ordinary Afghans, to a large extent, has changed in this regards and they do not want this issue to be discussed anymore and the difference to become deeper.

The Future of Disputes

However, the E-IDs will not be used in the upcoming Parliamentary Elections, but considering the importance of these ID Cards, besides its distribution process became initiated after several years of delay and many problems, it is counted as an important achievement.

For now, the distribution process of Paper and Electronic ID Cards will be parallel and perhaps, the end date for cancellation of P-IDs will be announced after the upcoming elections. It looks like that this problem will become solved and in next few months, the people will have to take these ID Cards.

As the Afghanistan Central Civil Registration Authority (ACCRA) also said, it looks like this process will not be stopped due to political disputes and stations for distributing E-Tazkira will start to operate in centers of big cities; however, it would be accompanied by challenges anyway.

The disputes in this regard now need more decisive positions; because the activities of some circles have made the peaceful resolution of this process almost impossible. For example, some people, benefiting the issues of enshrining nationality and ethnicity in E-Tazkira, talk about changing the name of “Afghanistan” into “Khurasan”, which have a possibility of making these disputes and controversies more deeper, and if this issue was led to other discourses, its elucidation would become dreadful.