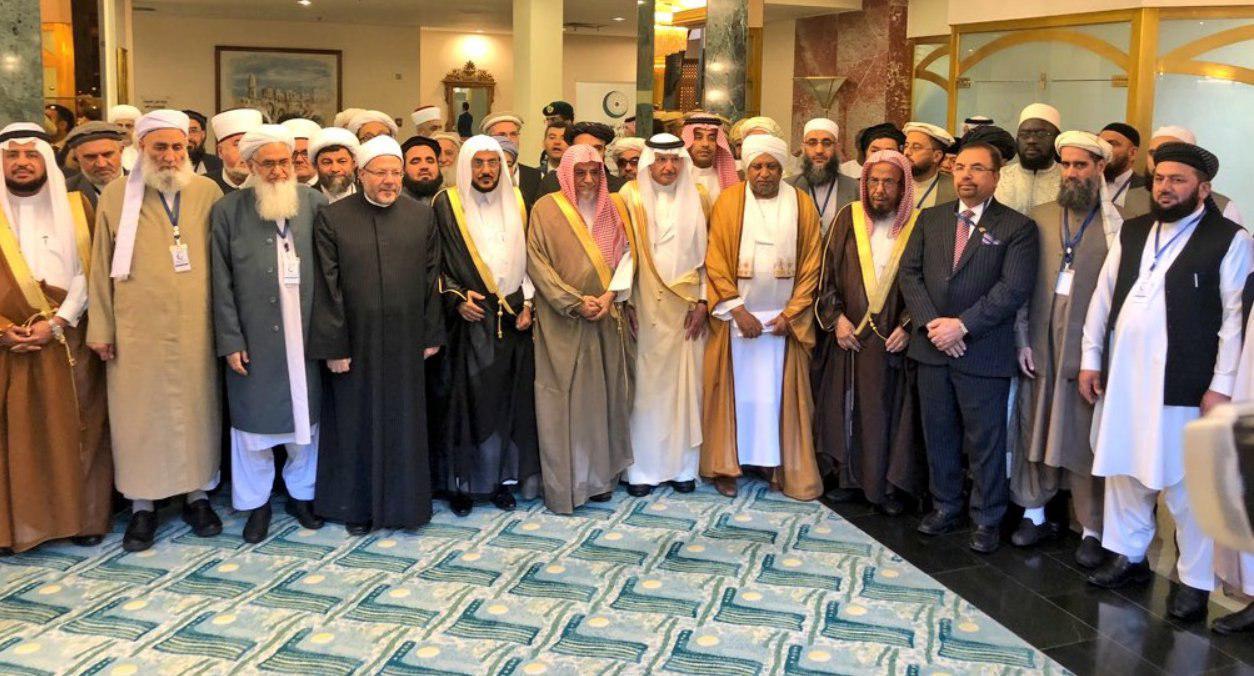 A two-day conference of Religious Scholars of Islamic World on Afghan War and Peace became convened as result of the initiative of Organization of Islamic Cooperation (OIC) and collaboration of Saudi Arabia last week (10-11 July 2018).

More than 100 religious scholars from 37 countries, including Afghanistan, were participated in the 2-day international conference entitled “Peace and Stability in Afghanistan” where it issued a declaration after two days of discussions on the issue of Afghanistan. The declaration states: “the government of Afghanistan is Islamic, its people are Muslim and fight against Muslims is illicit in accordance with Text [Nas] of the Quran.” A part of the declaration also emphasized on inter-Afghan negotiations between Taliban and the Afghan government and asked both sides to sit together and make peace for the sake of ending war and bloodshed in the country.

Notwithstanding, America is one of the sides involved in the Afghan war; however, the declaration of the conference did not point out the role of America in ending the war in Afghanistan and maintaining peace in the country.

The consequences of the conference and role and responsibility of the United States in ending the ongoing war and maintaining peace in Afghanistan are discussed in the Analysis.

Peace and talks with Taliban is the issue that despite the government of Afghanistan, there are many other domestic and foreign independent institutions that struggle and make efforts for since last one decade. In the meantime, establishment of High Peace Council (HPC), Urumqi and Murree talks in China and Pakistan, “Quadrilateral Peace Conferences” process in Kabul and Islamabad and “Kabul Process” two Conferences are among the main efforts made by the Afghan government for the purpose of initiation of peace talks with the Taliban; however, there is yet to be discernable.

Three weeks after the Indonesia Conference, the Afghan government held another conference in Kabul on June 4, 2018, where more than 2000 Afghan religious scholars had participated in it and issued a fatwa on illegitimacy of the ongoing war in Afghanistan; however, the Taliban, in a statement of it, had called the fatwa of religious scholars in Kabul as an American proposal and process.

Following these efforts, a conference on Afghan war and peace was convened in the land of the Two Holy Mosques (Haramain Sharifain) last week where a large number of religious scholars from Islamic countries, more explicitly, called the ongoing war in Afghanistan as “prohibited”.

Whatsoever, the religious scholars’ conference in Kabul had issued the same fatwa; however, the fatwa of International Conference of religious scholars from 37 Islamic countries in Jeddah and Makkah was the largest and most important fatwa against Taliban in last 17 years of war in Afghanistan. The important points of the fatwa are as following:

There is nothing different seen in the fatwa of religious scholars in the Saudi Arabia Conference in compare to the fatwa of Afghan religious scholars in Kabul. Because the government of Afghanistan was also called Islamic and the ongoing war Haram in the Kabul Conference; however, the point that was neither mentioned in the Kabul Conference nor in the Saudi Arabia Conference was presence of foreign forces especially the United States as the starter of the war and their role in ending the war and maintaining the peace.

The Saudi Arabia Conference also stressed on inter-Afghan dialogue between government and the Taliban; in the case, the Taliban has, for many times, rejected the peace talks with the government of Afghanistan and has called it “incompetence”. Therefore, proposing solutions for main obstacles toward peace in Afghanistan is must in such a deadlock.

America; neglected side at the conference

The United States, apparently, attacked on Afghanistan in order to fight against terrorism, eliminate Al Qaeda and form a new government and ruin the Taliban regime; however, there were many other important goals in the main scenario which were focused on after the battleground of Afghanistan became warmer in 2005.

As there was relative security in entire Afghanistan till 2005; however, for the purpose of creating insecurity and revival of war, American troops started night raids, arrested former Taliban members, did inhumane activities, killed civilians and did many other things which, eventually, resulted in the restoration of Taliban war.

There were more than hundred thousand American troops in Afghanistan between 2009 and 2012 and the battleground was warmest than ever; however, their number decreased by 10,000 while the war was on the peak in 2014 reasoning the transmission of security responsibility to Afghan forces. After then, they have played their role just as “watcher”.

After the formation of National Unity Government (NUG) and signing of Bilateral Security Agreement (BSA), American troops revived night raids and the Afghan officials neglected the intentional killings of American troops. After Donald Trump took office and announced his new military strategy where I had stressed in increase in the number of soldiers and pressure on Taliban; hopelessness on ending the Afghan war once again arrived as presence of foreign troops is the main reason behind Taliban fight in Afghanistan and so the group give emphasis to not stop fighting until withdrawal of foreign troops.

Despite all what has been said, as the foreign forces, the Afghan government and Taliban are the main sides involved in the Afghan War, so it is their responsibility to make peace and put an end to the ongoing war in the country. Therefore, until Taliban accepts the Afghan government as a main side in the issue of peace and war and until the United States does not enter the issue as a main side of war instead of playing a mediator role, these efforts will not have ideal results.