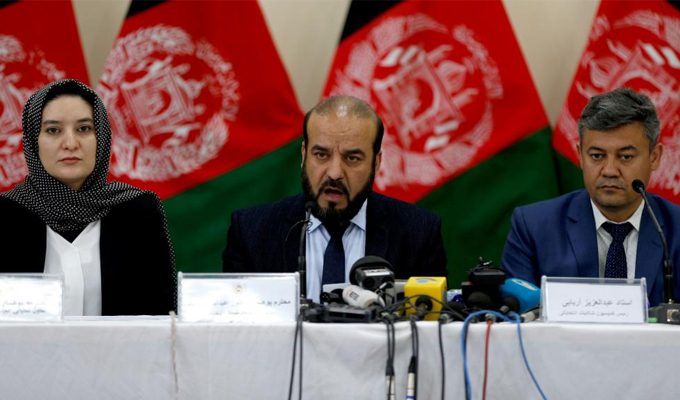 The Afghan Independent Election Commission (IEC) announced the date set for the upcoming presidential elections which they decided would be held on 20 April 2019. Dr. Abdul Badi Sayyad, head of IEC told a press conference that the given date for the presidential elections was chosen based on the country’s constitution and the law on elections, considering the various operational, financial, administrative, security and climate conditions of the country, and as a result of consultations with the representatives of political parties, civil society activists and electoral overseeing institutions.

The announcement of the presidential election’s date comes at a time when there remains much perplexity and uncertainty with regards to the parliamentary elections which have been postponed for three years. Although the parliamentary elections is set to take place on the 20 October 2018,  the existence of security threats, opposition of political parties and accusations of fraud and imitation adds to the ambivalence of the situation.

In this Analysis, we look at the 2019 presidential elections, the challenges ahead, and the fate of the National Unity Government.

The term of the National Unity Government (NUG), which was formed after the controversial 2014 presidential elections, will, according to its contract and based on the constitution, officially expire on the 1st of Jawza (3rd month) of 1398 (solar year) after which a new President will be elected to take up office.

President Ghani has time and again stressed that the Presidential Election would be held on the time specified in the Afghan Constitution. Recently, during the Fifth National Women Symposium, the President once again stressed that his term would expire by the 1st of Jawza of 1398 (solar year) and thus termed the holding of presidential elections in accordance with the Afghan Constitution as indispensable.

Although for a long time the President had also emphasized the importance of holding parliamentary elections, the Afghan people have witnessed three years of its postponement. Finally, the Afghan government was able to announce 20 October 2018 as the date for the parliamentary elections. The practical work of the process has started but its fate is yet to be spelled out due to the existence of security threats, political disputes between political parties and the government, criticism of the mechanism of holding elections, corruption, and fraud in the process.

Will the Presidential Elections be Held?

The Afghan Independent Elections Commission (IEC) specified the date for holding the presidential elections and the government also welcomed it while it faces grim circumstances of the security, political and economic situation. The question is whether the government will be able hold the presidential elections in a period of less than one year, in accordance with the constitution and the time frame, considering that the fate of the parliamentary elections is not palpable yet.

The following points indicate that holding the 2019 presidential elections on 19 March, 2019 is not practically possible:

Security Dilemma: Insecurity is one of the biggest challenges threatening the upcoming presidential elections. According to SIGAR, 42% of Afghan territory is either controlled or influenced by the armed opposition of the Afghan government. The security threats by ISIS (Daesh)  have increased after the National Unity Government (NUG) came into power, and especially in the last two years. The group has frequently targeted public and civilian bodies like schools and mosques with their bloody attacks in the last few months despite the presence of military organs. More than 120 people have been killed in the latest attack of the group on a mosque in Paktia.

Budget: Although a specific budget is yet to be allocated for the upcoming Presidential Elections as the IEC acknowledges, while declaring the official date for holding the Presidential Elections, Abdul Badi Sayyad, head of IEC, said that the IEC would require the cooperation of the international community and the government when it comes to funding the election budget.

The Afghan government has promised to facilitate the Independent Elections Commission (IEC) entirely. Additionally, donor countries have promised that they would provide the expenditure of the elections while emphasizing they should be given assurance that the money is not misused. Currently, Afghanistan faces numerous problems as corruption remains one of the main challenges for the Afghan government.

Fate of the Parliamentary Election: The unfolding of the process leading to parliamentary elections would directly impact public perception on the presidential elections. Presently, the political parties accuse the government of meddling in the work of the commission and do not accept the current mechanism for holding the elections either. Thus, it would be safe to predict that if the IEC is not able to hold the parliamentary election on the date specified, and without confrontations, it would seem most likely that the commission would not be able to hold the presidential elections either.

The recent confrontations between a number of political parties and the Afghan government have caused in deterioration in the political situation of the country. Political parties want change in the electoral system, cancellation of the voting registration process and use of the biometric method for voters’ registration. If this situation continues, the government will have to accept the demands of the parties, and holding the elections on the announced date will not be possible.