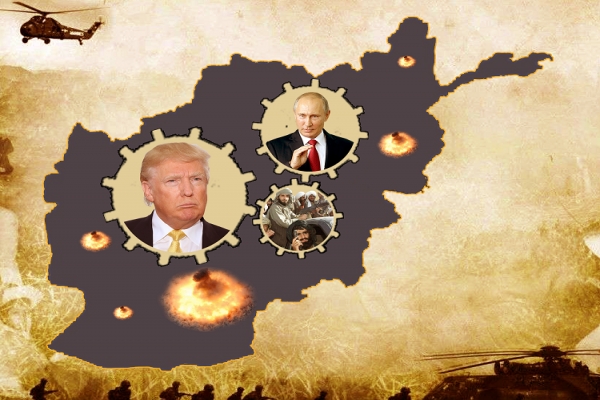 While the regional and international-level efforts for Afghan peace are underway, the actors in the process search for their own interests in the matter. Taliban also try to further increase their diplomacy in an effort to usurp these actors for the sake of putting pressure on the Afghan government and International Community.

In recent years, similar efforts are made on the Afghan peace; however, these efforts have been comparatively hastened in the last few months. Examining them closely, these efforts can be divided into two parts: one are the efforts has been made through satisfaction and/or encouragement of the Afghan government and U.S. and the other are those which are made for putting pressure on the U.S. and/or originates from the active diplomacy of Taliban.

Following the Tashkent Conference, the Afghan government was able to hold another important meeting in Saudi Arabia which resulted in a declaration on illegitimacy of Afghan war in order to pressurize the Taliban; but the planning of a peace-related meeting with the Taliban in Russia is a move made against the satisfaction of the Afghan government and has created concern in Kabul.

The topic on the nature and purpose of peace-related regional efforts, the associated concerns and barriers, and the impact and future of these efforts are discussed here.

Qatar is a country who took the first step to play a role in the Afghan peace and, thus, having an understanding with the United States, provided the Taliban with a political office. At the beginning of the Trump Presidency, there were rumors on the closing of the Qatar Office, however, it still seems that the Qatar Office being the most powerful address of the Taliban diplomatic activities have led to regional and world countries taking up roles and getting involved in the Afghan peace, especially in the talks with the Taliban. At the same time, the Taliban have also organized different activities and talks from this address, and a number of important Western officials have even been members of the Qatar Office at different times.

The role of Qatar is worth considering as the most effective in such efforts and the allegations of ruinous goals are yet to be seen with regards to the Qatar Office. Therefore, the Qatar Office is expected to be accorded recognition as the official office of Taliban for direct peace talks.

From the very beginning, Pakistan was against the inauguration of the Qatar Office, but a number of other countries have benefitted from the existence of the office for the purpose of increasing their role in Afghanistan; among Iran ties with the Taliban should be pointed out. Both Iran and Taliban have confirmed these ties; justifying them with some reasons; however, the US and Afghan government accuse Iran of secretly supporting Taliban. As Iran is afraid of ISIS (Daesh) and meanwhile has tensions with the U.S, it seems likely that Iran would deepen its ties with Taliban which will have an impact on increasing of U.S needs and lead to a higher probability of U.S. direct talks with Taliban.

Besides Iran, Russia has also expanded its ties with Taliban after the emergence of ISIS in Afghanistan; although Russia is afraid of Daesh on the one hand, while on the other hand its ties with the U.S. are seen as a part of the continuation of the Cold War. Hence, Russia’s efforts are not considered as peace-oriented. The National Unity Government (NUG), which has better ties with the U.S. in comparison to the second term of President Karzai, has relatively deteriorated ties with Russia. The Afghan President Ghani accused Russia of directly providing weapons to the Taliban. Based on this, the Afghan government is suspicious of Russia’s peace efforts and counts it as part of Russia’s Cold War tactics with the U.S.

Furthermore, a number of countries including Uzbekistan, made ties with the Taliban to protect its interests related to regional projects and to ensure safety from the incursion of ISIS into their countries. Thus, they try to play a role in the Afghan issue and peace talks with the Taliban.

Since 2010, the Afghan government initiated peace efforts with the Taliban; however, most of the time, it took the shape of a project and apart from spending millions of dollars on the Afghan High Peace Council (HPC), no concrete result has been seen yet. The NUG, however, went a step further than the Karzai Administration and even offered the Taliban some privileges for the sake of starting direct peace talks; but the strategy encountered serious barriers. The problem is that the Taliban consider the Afghan government “incapable” when it comes to the fate of the foreign forces deployed in Afghanistan and thus reject direct talks with the government. Furthermore, some other problems such as the government’s internal disputes, have also resulted in the failure of the Afghan government in this task.

As the role of regional countries began to increase with regards to the Afghan issue, the Afghan government also tried to grab the cooperation of some regional countries and bring these efforts under its control. For that reason, President Ghani, through initiating the Kabul Process, emphasized an Afghan-owned, Afghan-led peace process. Considering the efforts of the government, the Tashkent Conference and the Religious Scholars’ meeting in Saudi Arabia should be considered. Although, the international community are not all set to neglect the government which has been brought to this level in 17 year, the result has been the government’s insistence on bringing the peace process under its control. The Afghan government is afraid that if it fails in the peace talks, it will pave the way for further failures in the government and will cause the U.S., who was supporting the Afghan-led peace process, to enter the field by itself and disregard that matter to some extent. For this reason, Deputy Secretary of State Alice Wells’s direct talks with the Taliban, was a matter of concern to the Afghan government, and through publishing a statement the Government said that no country substitutes the Afghan government in peace talks.

One the one hand, the government peace policy is unsuccessful as the Taliban provided negative response to President Ghani’s call; on the other hand, the Taliban ties are about to expand with Iran and Russia, and that is what will make the Afghan issue more complex.

It still is not expected that the Taliban will easily sit at the negotiation table with the Afghan government because the entire effort on the issue was neutral – from putting pressure on Pakistan, to putting military and political pressure on the Taliban. And now, as the U.S. gave the green light to the Taliban, direct talks between the Afghan government and Taliban seem impossible for now. Besides that, although the international pressures and arrival of Imran Khan has brought some hopes of Pakistan’s cooperation, however, it still seems likely that pressures on Pakistan and recent changes in the leadership of the country would not pave the way for direct talks between the Afghan government and the Taliban.

Even though, the Taliban diplomacy is remarkably more active in the last few years. Taliban has established ties with Russia and a number of other countries in the region which has caused the U.S., besides other factors, to show readiness for direct talks with the group after 17 years.

Although, talks between Taliban and the U.S began in 2013 and talks were pursued on the exchange of Bowe Bergdahl and five imprisoned senior Taliban leaders; the office is yet to be accorded recognition as a result of the insistence of the Afghan government and, hence, they are yet to initiate official talks with the group.

The efforts of regional countries, however, might not lead to direct talks between the Afghan government and Taliban, but they contribute to the peace process in general, because the peace process seems impossible until the U.S. takes a direct role and part in it. Therefore, such pressure especially that of Russia, can have an impact on the U.S. position in this regard.

Taliban are enthusiastic for peace talks more than any other time. As the Taliban expressed its power and leverage in the ongoing war through a 3-day Eid Ul Fitr ceasefire, the ISIS group is also gaining power in Afghanistan day by day; hence, Taliban are afraid of their weakening role in the battlefield. Eventually, increase in the public, political, and military pressure on Taliban have also made them keen on peace talks in comparison to the past.      End