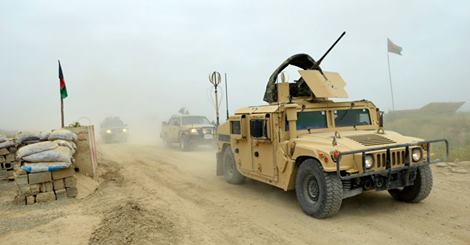 Since few months, the anti-government insurgent groups have sieged control of many districts in different provinces and as compared to the past years the insurgency and insecurity in the country has not only increased, but also spread from southern to northern provinces and according to the Afghan minister of interior affairs 19 provinces is faced with the serious threat to falls in Taliban’s hand.

Moreover, some of National Unity Government’s (NUG) policies, for instance forming militias, mismanagement, the internal disputes of government, the improper aid to Afghan security forces and the bad behavior of local police are the reasons which have paved the way for the insecurity in the country.

In this article, we have discussed the causes and consequences of the falling downs of districts in detail.

Compared to the last fourteen years, there are more stories now about Taliban taking over the control of districts in Afghanistan. Precisely speaking, in the last few months, the Chardarah and Dasht-e-Archi of Kunduz, Kohistanat of Sar-e-pul, Jawand of Badgheez, Nawa of Ghazni, Yamgan of Badakhshan, Nawzad of Helmand, Wand Waygal and other districts have falls to the hands of Taliban and the Pasapand, Taywrah and Charsadah of Ghor, Sangeen, Kachkee and Musa Qala of Helmand, Samkanyo of Paktia, few districts of Kunar, Nangrahar and Nuristan, the Azra, Sarkh and Kharwar of Logar, the Dahna Ghori of Baghlan, the daymerdad of Maidan-Wardag, the Khas Uruzgan of Urugzgan and other districts are faced with serious threat to be sieged by Taliban.

The reasons behind ‘fall’ of districts

Precisely speaking, there are numerous factors behind the falls of districts to Taliban, which are as follows:

The internal political disputes in NUG have affected the insecurity in the country. There were disputes due to results of election, and later, when the NUG was announced there were serious political differences between Ashraf Ghani and Abdullah Abdullah’s teams even to now. At the start, the disputes were basically over nomination of ministers but as the time passed these differences are slowly moving towards governmental policies.

The minister of Defense is yet to take vote of confidence from Parliament and moreover the government is not on the same page about issues. Keep apart the differences of Ashraf Ghani and Abdullah Abdullah, the President and the first vice president is having contradictory remarks.

It is hereby that the deputy of Mashrano Jargah (upper house) says: ‘unfortunately, the government didn’t have a clear vision, precise policies, and therefore the government is having differences of opinions.

Local and irresponsible Police is one of the reasons which caused the districts to fall to Taliban. It was basically due to their bad behavior with common people and compromise with Taliban. Therefore, the people were forced to take side with Taliban and hence the districts were fallen.

For instance, the peoples of Aqtash has said in different reports that they becomes tired of local police, helped the Taliban and they came and controlled the area.

Moreover, apart from the bad behavior of local police, some of its members has also entered the ranks of Taliban or indirectly had helped Taliban in capturing districts.

Before June, 2014, the northern tribal areas and Waziristan were the safe houses of foreign militants in Pakistan. However, when the Pakistan Army launched operation Zarb-e-Azb in North Waziristan in the wake of a June 8 attack on Jinnah International Airport in Karachi and at the end of 2014, when the teen students were killed by insurgents in attack on an army Public School in Peshawar, Pakistan’s anti-terrorism policy becomes hardened and it did started many other operations in FATA region.  It must be noted that with the launching of Pakistani military’s Operation ‘Zarb-e-Azb’, only anti-Pakistani insurgents were targeted but when the incident of Army Public School happened in December, 2014, it affected Pakistan’s anti-terrorism policy and it thus targeted all the foreign militants in Pakistan.

Therefore, due to Zarb-e-Azb fallout, many foreign militants seek refuge in Afghanistan, and the foreign militants also want to be nearer to their native lands. Consequently, the insurgency in Badakhshan, Takhar, Kunduz, Jozjan, Faryab, and Sar-e-Pul is day by day increasing mostly due to their joining hands with Taliban. The Afghan minister of interior affairs also accepts the presence of foreign militants in northern Afghanistan and says they want to find safe houses and build a bridge between Northern and Southern Afghanistan.

The presence of foreign militants in northern Afghanistan and its joining hands with the Taliban has also been responsible for the fall of districts.

Another reason behind Taliban’s capturing districts is that Kabul has signed strategic agreement with Washington. At the times of Presidential elections (2014), Ashraf Ghani had ensured Taliban that he would delay the signing of strategic agreement with the USA, However within 24 hours of its inaugural he has signed the mentioned agreement and therefore closed all the doors before Peace and in retaliation Taliban started their spring operation, Azam.

While just becoming afghan President, Ashraf Ghani warmed its relations with Pakistan, because he thought the key to peace in Afghanistan is Pakistan. Therefore, he gives privileges to Pakistan and curb down the Indian influence with the hope that Pakistan might help in the reconciliation and peaceful process.

On the other hand, Taliban are not happy with the current foreign policy of Ashraf Ghani because it would really damage their political survival and would show them as the stooges of Pakistan. Therefore, it is hereby they are forcing one point that only the Qatar office has the legitimacy to talk and the Taliban in Pakistan also avoids talks with Afghan government because it would perceive them in the minds of Afghans as the puppets of Pakistan.

Numerous leaders of upper house (Mashrano Jarga) have said that due to mismanagement of afghan government districts have been fall to Taliban.

Not sending ammunition and physical support to Afghan security forces is another factor behind Taliban’s seizing control of districts.

Another reason behind Taliban’s capturing of districts in Afghanistan is that Afghan air force is faced with the shortage of aircrafts and combat training. Even though, many months have been passed over the signing of strategic agreement but still the USA hasn’t equipped Afghan air force.

The Impacts of districts falling in Taliban Hands

The districts captured by Taliban have impacts on the present situation of the country and it would affect it as:

Firstly, it would damage the morale of afghan security forces and the people would lose confidence in Afghan Army.

Secondly, it would boost the chances for militia making in Afghanistan. Our history is full of such examples; whenever people have lost confidence in Afghan army the chances have become greater to make militia in northern and southern Afghanistan. If like the 90s era, militia are made then it would have deep impacts on Afghanistan and would extend the war.

Thirdly, it would affect and boost the insurgent minds to continue their wars because they are not only successful in capturing districts but their morale is also day-by-day increasing.

Fourthly, the Taliban’s capturing and re-capturing of districts by Taliban and Afghan government would affect and influence the day by day routine of the people.

Fifthly, the afghan government was expecting to get announcement of ‘cease fire’ in the upcoming second round of talks in Pakistan. But if the war continues as it is and Taliban seizes many districts, it would have negative impacts on the peaceful process.