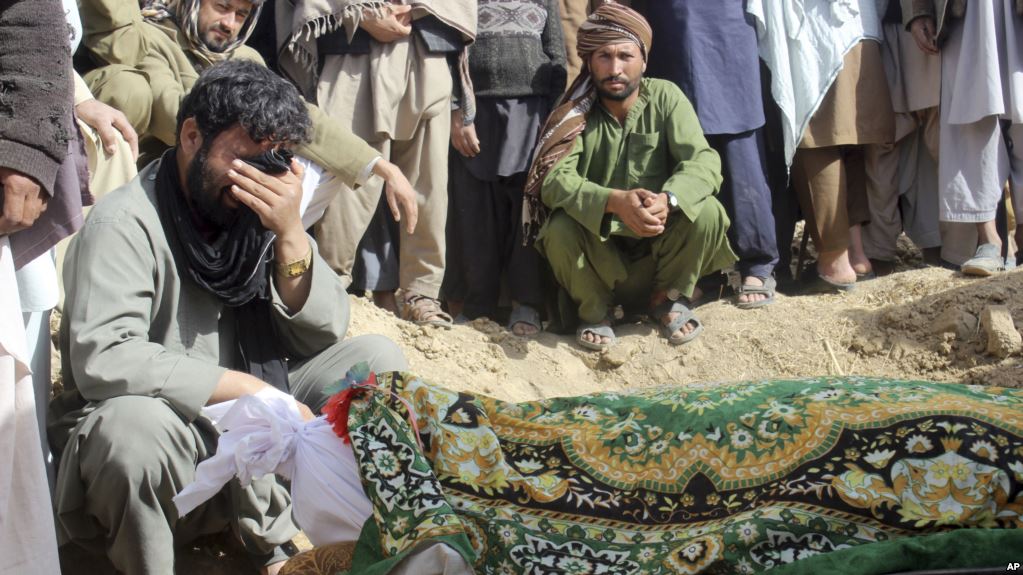 Last week, United Nations Under-Secretary-General for Humanitarian Affairs and Emergency Relief Coordinator Mark Lowcock in his 2-day visit to Afghanistan said that 40 thousand civilians have been killed and injured during the four years of the National Unity Government (NUG).

Although, the U.S war on Afghanistan is ongoing since the last 17 years; it has enflamed more than ever after the NUG was established in 2014. Apart from the involved parties, the death and injury of tens of thousands of civilians was  caused; but the U.S. and the armed opposition of the government are yet to eliminate the opposite side in the battlefield.

Four years ago, the National Unity Government (NUG) began to operate on September 2014 following the controversial election result. From the very beginning, the NUG faced security challenges after its leaders signed the Bilateral Security Agreement (BSA) between USA and Afghanistan. However today the war in Afghanistan has intensified.

During the National Unity Government (NUG), the domain of war expanded to almost the entire  country and security has deteriorated year by year. The fall of Kunduz province to Taliban for the first time after 2001, the Taliban attacks on provincial centers of Farah and Ghazni bringing majority of the governmental bodies of the two provinces under their control, and the increase in suicide attacks are the signs of the poor security situation in Afghanistan. Additionally, as the war intensifies, increase in suicide attacks of the armed opposition and air strikes of the foreign forces and Afghan militants have caused a rise in civilian casualties.

Considering the statistics of international organizations, more than 10 thousands civilians have been killed and injured every year since the establishment of NUG in 2014.

1692 civilians were killed in the first six months of 2018 according to a UNAMA report, among them, 544 were female, 263 were children and 785 were male. 3430 civilians became injured in this period, among them, 992 were children, 387 were women and 2051 were men. Although, the statistics of the mentioned organization in first six months of 2018 show 1% increase in casualties; however, it shows a 5% decrease in those who became injured in comparison to the same period in the last year.

Government Armed Opposition: one of the factors behind civilian casualties in Afghanistan is government armed opposition, especially the Taliban. Most of the time, civilians are killed and injured due to their explosions and suicide attacks. The bloody attacks on Enlightenment Movement, Charahi Zanbaq Square, Mawoud Educational Center, Wrestling Club, Protestors of Momand Dara of Nangarhar and tens of other deadly attacks during the four years of NUG that resulted in the death and injury of hundreds of civilians.

Foreign Forces Operations: The bombardment of foreign forces have increased during the 4-years of NUG, especially after the announcement of the new U.S military strategy for Afghanistan, which mainly targets civilians. The U.S forces deployed in Afghanistan have carried out 2611 air strikes in 2017. According to reports, the number of airstrikes were 1071 in 2016 and only 236 in 2015.

The continuation of war under any banner is disadvantageous to the people regardless of strategy used and causes catastrophic tragedy for the people and the society. Therefore, it is necessary to consider the experience of the last 17 years, make efforts to put an end to the ongoing war in the country, and to have the involved parties make peace with each and eventually have peace maintained in the country.

During the last 17 years, U.S. has modified its war strategies and brought changes in the leadership of foreign forces involved in the Afghan war. The bombardment rate multiplied however, it is yet to receive any palpable result. The new military strategy of Donald Trump is actually the repetition of experiences of the past administrations and, as witnessed in the last one year, it is botched. The U.S general themselves confirm that the Afghan war has encountered deadlock.

Putting an end to the Afghan war and making realistic efforts for national conciliation is directly linked to the future of the security situation and living conditions in the country. If the U.S and the International Community want to put an end to the Afghan war, they need to continue their already begun negotiations with the Taliban in coordination with the Afghan government. The Taliban have understood that they cannot achieve their goals through war and should also struggle for peace talks and alleviating the raging war in the country.

Since the U.S initiated the war, it remains responsible in playing a vital role in ending it. Cooperation or lack of cooperation of neighbors and other regional countries in the Afghan issue has a direct link to the security situation and U.S presence in Afghanistan. After the establishment of U.S. permanent military bases in Afghanistan and emergence of the “Islamic State” group in the country, the regional countries, especially Russia, continuously criticize the U.S. policies about its “War on Terror”. Inversely, NATO and U.S accuse Russia of supporting Taliban and thus, the Afghan and U.S officials are concerned about Russia and Taliban ties.

The confrontations of regional and world countries cause big security challenges for Afghanistan as well as the region, and is very likely to turn Afghanistan into the battlefield of long proxy wars. But for the sake achieving regional cooperation, the United States should hold its military presence to a withdrawing schedule from Afghanistan in order to eliminate the concerns and doubts of some regional countries about the presence of the U.S in Afghanistan.