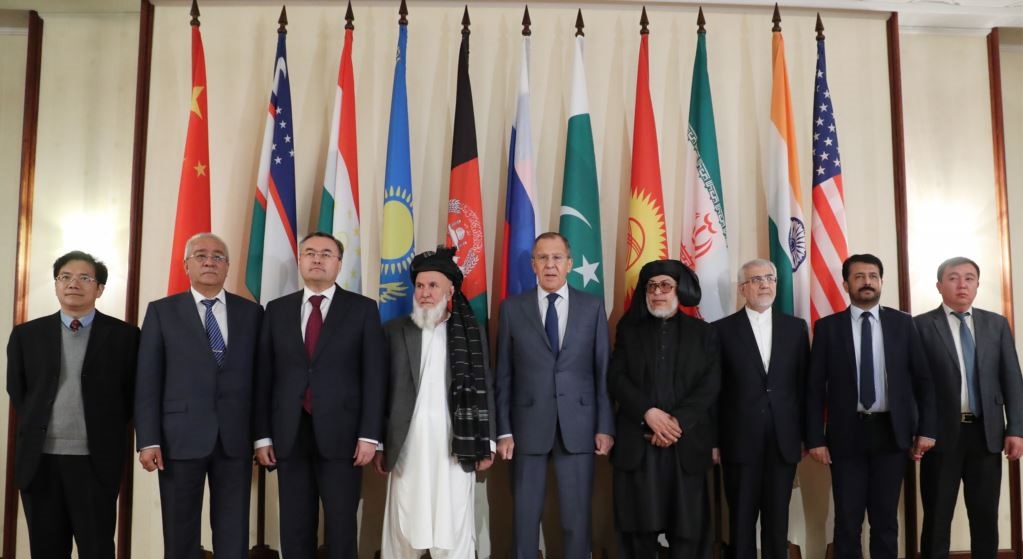 Last week (November 9, 2018), Moscow was hosting an important meeting on Afghan peace. Twelve regional countries, including the United States and Afghanistan, were invited to the meeting; however, the US participated as an observer and Afghanistan sent a senior Afghan High Peace Council delegation to the meeting instead of dispatching its official representatives.

The Islamic State group or Daesh is being supported by some countries in order for the region to become insecure, referring the presence and threat of Daesh fighters in Afghanistan, Russian Foreign Minister told while giving inaugural speech to the meeting. He recalled the Russia’s efforts in Afghanistan for the sake of peace and stability in the country.

The meeting had grabbed the international attention as a senior Taliban delegation had participated in it and as the Russia’s interest and involvement has increased in Afghanistan due to the recent Cold War between Russian and America.

Impact of US-Russia Cold War on Afghanistan, Russia’s intentions behind its efforts and the outcomes and impacts of the recent meeting are discussed here.

Although every step toward the Afghan peace emerges hopes; however, the Moscow Meeting was carrying the message of US-Russia Cold War and confrontation of these countries in the Afghan issue. Because of such a mentality, Russian Foreign Minister emphasized in his speech to the meeting that they do not want Afghanistan to be turned in to the battlefield between regional and international actors and superpower and the only purpose behind the meeting is strengthening peace in Afghanistan.

From one hand, the elongation of US war in Afghanistan and from other hand the failure of Afghan government’s peace efforts have resulted in copiousness of regional and international actors in the Afghan issue. As Russia and America are engaged in a New Cold War on regional and international level since last few years, so Afghanistan has also turned into a ground of the Cold War.

Russia is nowadays afraid of the US presence in Afghanistan and its concerns have got increased especially after the US military bases became built in Afghanistan and Daesh expanded its activities in Afghanistan since 2015; therefore, it has started to play vital role in the Afghan issue after that.

There are two kind of analysis regarding the latest efforts of Russia and their impacts of Afghan issue:

First: Russia’s efforts might be navigating the Cold War with US and aiming at putting pressures on America and thus the recent struggles on maintaining peace and security could have inverse results and will cause it in complexity and elongation of the Afghan war.

Second: There are some observations that, perhaps, the United States, might not welcome the expansion of Russia’s role in the Afghan issue especially the further development of Russia’s ties with the Taliban. Therefore, the US will enhance its efforts to reach an agreement with the Taliban through having direct talks with them.

Outcomes and Impacts of the Moscow Meeting

The Kabul-Moscow ties became deteriorated during the National Unity Government (NUG) in compare to the Karzai administration as the NUG was trying to establish good relations with Washington and as there were obvious changes in Russia’s policies on Afghanistan. Thus, the Afghan government is skeptical of Russia’s peace efforts and the latest meeting had worsened the atmosphere as well.

From one hand, the Afghan government does not like to participate in a meeting not lead by it, and from other hand, it is, to some extent, concerned about not to be neglected during US-Taliban direct talks. Therefore, it has backed the US position against Russia by not participating in the meeting. Simultaneously, the participation of Afghan High Peace Council (HPC) delegation in the meeting was displaying the weak and doubtful position of the Afghan government as the HPC is the official organs from peace process with Taliban; however, no developments are yet to be made by the HPC and it is concerned as an unserviceable address for peace.

On the other hand, it was a good opportunity for the Taliban to officially participate in a meeting with regional and international importance and to talk about its stands. From one hand, Taliban conveyed the message of having the support of powerful Russia to US and Afghan government and from other hand it raised their voice with international community with a broad and impactful manner. The Taliban delegation emphasized on the point that they are not a threat to the neighboring and regional countries, and it is what strengthens the Taliban regional support.

Taliban have enhanced their diplomatic efforts in recent years, specifically after the inauguration of their political office in Qatar in 2013. They have also understood that developing ties with Russia could increase pressure on America and will pave the way for direct US talks with the group.

Besides that, the US is concerned about participation of Taliban representative in the Moscow Meeting and perhaps, it, to an extent, could have impact on US position regarding its direct talks with Taliban; because the US does not want the expansion of Russia’s role in Afghanistan than what it is today.

The Moscow Meeting is convened while the United States has recently taken hopeful steps toward Afghan peace in compare to past. Simultaneously, the special envoy of US Department of States for Afghan peace, Zalmay Khalilzad, who had previously met the Taliban representatives in Qatar, had also realized his second visit to the region as the meeting was going on.

The main reason behind continuation of Afghan war is presence of foreign forces in Afghanistan, and thus, as long as the United States did not put the withdrawal timetable of its forces from Afghanistan on the negotiation table with Taliban, the process might have not got any perceptible outcomes. The main argument that why the peace-related efforts of Afghan governed are remained fruitless is that the Taliban considers it as incapable when it comes to their main demand (fate of foreign forces in Afghanistan) and thus deny having direct talks with the government.

Besides that, the Afghan issue has got domestic and foreign aspects that are timetable for withdrawal of foreign forces and paving the way for inter-Afghan dialogue. In foreign aspect, regional efforts are counted useful to an extent and the Russia’s pressure could have impact on US position; because the successfulness of peace process seems impossible until the US take and play direct role in the talks.