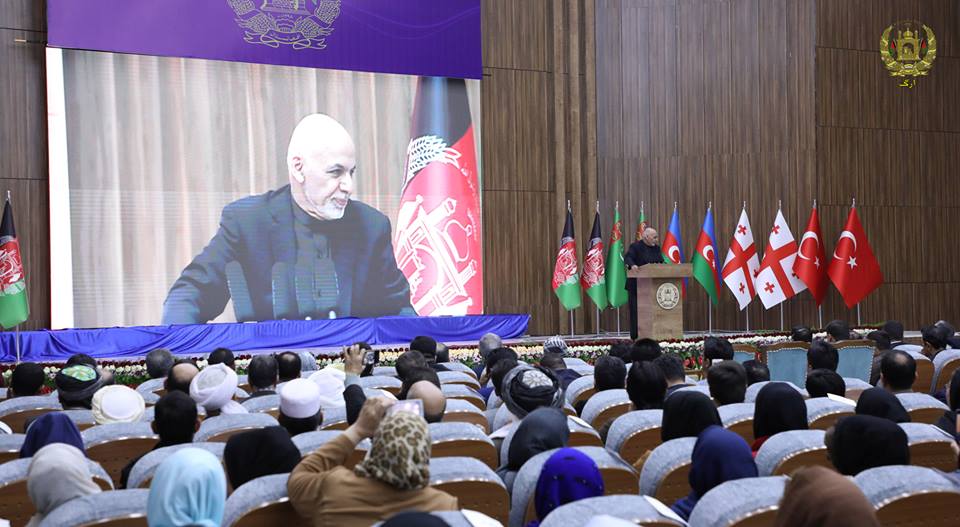 Last week (12-13-2018), President Ghani officially inaugurated the Lapis Lazuli trade and transit route in Herat province of Afghanistan. Following a long interval, it was for the first time that Afghan goods loaded to 9 Lorries moved toward Turkey through the Lapis Lazuli route, which originally was a part of the ancient Silk Road.

The Lapis Lazuli is an Afghan initiative and the agreement was signed between representatives of five countries, Afghanistan, Turkey, Turkmenistan, Azerbaijan and Georgia, in RECCA VII Conference of 2017.

Afghanistan is landlocked country and, thus, it must get rid of being in need of one or two neighboring countries for its trade and transit; hence, there are hopes regarding the inauguration of the Lapis Lazuli route.

Background of Lapis Lazuli route, its importance for Afghanistan and the region and the challenges and opportunities ahead are discussed here.

Based on independent institutions’ studies, the Lapis Lazuli route is one the Asia-Europe transit routes which has got a history of two thousand years and it, originally, was one of the important routes of the Silk Road. At that epoch, the Afghan valuable stones, including Lapis Lazuli of Badakhshan mines, were exported to Europe, Balkans and Mediterranean countries and, then, the route is given the name of Lapis Lazuli route.

The Lapis Lazuli route plan was shared by Afghanistan with the relevant countries (Afghanistan, Turkmenistan, Azerbaijan, Georgia and Turkey) in 2014, which was warmly welcomed by the said regional countries. The Lapis Lazuli route which is started from the Aqina Port of Faryab province and Torghondi Port of Herat Province is passing through Turkmenbashi Port of Turkmenistan, Baku City of Azerbaijan and Tbilisi City of Georgia to the Black Sea and, then, to Turkey and, in this point, where it connects Afghanistan to open waters and Europe.

The Lapis Lazuli transit and trade route that connect Afghanistan and South Asian countries with Europe through road and railway is considered to be one of the shortest and most reliable transit route for a landlocked country like Afghanistan in order to get connected to Europe and, it can be counted as one of important achievements of Afghan government in regards with diversification of Afghan transit and trade routes with different countries in the region and the globe.

Afghanistan is a landlocked country and, thus, it needs to find better routes to waters for its transit and trade. Political and security challenges as well as other transit-related problems alongside the Indian Sea have made Afghanistan to seek alternatives for reaching the sea and connecting to the industrialized countries as well as other countries in the globe. In this regard, the Lapis Lazuli route is counted as one of the important alternatives for Afghanistan. Hence, the importance of Lapis Lazuli route can be framed in the following points:

First; Lapis Lazuli is the shortest, cheapest and most reliable route for Afghanistan in order to get connected to Europe, because there are railways from Afghanistan to Turkmenbashi Port as well as from Azerbaijan’s Baku to Turkey.

Second; the concerned countries do not impose any kind of tariff or put limit on Afghani goods and Afghan vehicles can enter each of these countries for the purpose of loading and unloading goods without being subject to custom barriers.

Fourth; Lapis Lazuli route is one of important regional initiatives and Afghanistan, through its active economic diplomacy, will profit more from its benefits, and meanwhile, it is considered as an important achievement of the National Unity Government (NUG) regarding the economic policies when it comes to economic integration in the region.

Despite the lack of security and stability in Afghanistan and the region, lack of surety of cooperation of some countries (Iran and Russia) in implementation of the scheme and lack of facilities for transferring goods and other services to the countries that wish to get benefited from the scheme are challenges towards the Lapis Lazuli route; however, China’s commitment to invest 40 billion US dollars in the field is a good opportunity for implementation of the Lapis Lazuli scheme. Moreover, it is a great chance for Turkmenistan, Azerbaijan and Georgia to shrinkage their dependence on Russia and it is a good opportunity for these countries to enter into a fecund partnership with Europe in this regard.

Turkmenistan, being a country concerned in the Lapis Lazuli route, is the fourth largest producer of gas in the world and, hence, it needs to seek for alternative means for the sake of its economic growth. For example, the Turkmen gas could find its way to the markets of China, Russian and Iran so far; in the case, these markets are continually encountered with problems. Therefore, getting use of the Lapis Lazuli route will result in Turkmen goods to reach to the markets of Europe. Hence, Turkmenistan intends to turn itself into an international trade transit route through the Caspian Sea and Black Sea water routes; and since then it invests in constructing roads.

Azerbaijan is another country located on the Lapis Lazuli route. The country, which was once a colony of the former Soviet Union, now, tries to avoid establishing closer ties with Russia and makes efforts to get connected to Western countries; therefore, the implementation of the Lapis Lazuli route scheme is also in a position of special prominence to Azerbaijan.

Another country one the route is Georgia. The country is connected to Azerbaijan, Russia and, through Black Sea, to Turkey and is counted as a good transit route for transferring the Azeri gas to Turkey. The Republic of Azerbaijan, Georgia and Turkey have created a consortium of gas and oil transfer lines and railways for the purpose of connection between each other and, thus, the Lapis Lazuli route is considered as one of the important routes for the country in order to expand these ties.