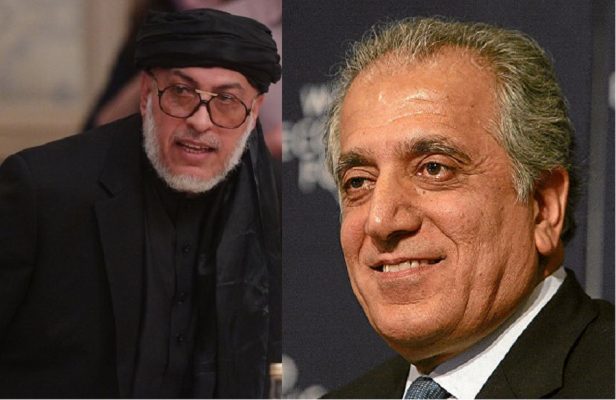 As the special envoy of US Department of State for peace talks with Taliban, Zalmay Khalilzad had a 3-day meeting with Taliban representatives during the third visit of his mission in United Arab Emirates (UAE) last week. Representatives of Pakistan, Saudi Arabia and UAE were also presented in the talks.

Although some Western media stations, quoting the Taliban sources, have said that: “at the UAE meeting, the US party proposed a 6-month ceasefire and, in return, the Taliban put the condition in order for an interim government to be established and its head to be someone suggested by Taliban, and Saudi Arabia, UAE and Pakistan to be the guaranteers of the entire process.” However, the Taliban group has denied the talks on ceasefire and interim government.

In spite of that, it is said that the 12-member delegation of Afghan government for peace talks with Taliban had also attended UAE and were prepared to have peace negotiations with the Taliban; but the Taliban avoided to have talks with government through publishing a statement.

The US-Taliban peace talks and the Afghan government’s position, the third visit of Zalmay Khalilzad and the impacts of recent meeting between US and Taliban are discussed here.

Despite countless efforts of Afghan government to initiate talks with Taliban; the group denied the request of government. Therefore, the US concluded that Taliban never wants to talk to the government and America, in person, cannot defeat the Taliban in war  either; hence, it decided to initiate direct talks with government and for this purpose, it appointed a powerful American diplomat, Zalmay Khalilzad to advance the process and, thus, from the very beginning, it has generated hopes for achieving peace and stability.

From the very beginning of his new mission, Zalmay Khalilzad started his visit from five regional countries (Afghanistan, Pakistan, Saudi Arabia, UAE and Qatar). During his first visit, he talked to the authorities of these countries regarding solutions to peace and maintaining security and asked for their cooperation on Afghan peace.

During Zalmay’s visit, Taliban and US representatives met and talked in Qatar and, then, the meeting paved the road for further meetings and talks. Moreover, Mullah Baradar and two other important members of Taliban became released from prisons as a result of the first visit of Zalmay Khalilzad. Meanwhile, five other Taliban authorities that were recently freed from Guantanamo Prison became authorized to join the Taliban political office in Qatar and take part in the peace talks process.

Following the US efforts on making peace with Taliban, Khalilzad realized his second visit to the aforementioned five countries shortly after his first visit. During the visit, Taliban and US representatives held talks in Qatar for second time. Some rumors were also effused that the Taliban and US representatives have talked regarding the ceasefire, establishment of interim government, withdrawal of foreign forces as well as freeing the Taliban prisoners.

Khalilzad’s third visit which became commenced on 2nd December of current year was more comprehensive regarding peace efforts in Afghanistan in compare to his past two visits. First two visits of Khalilzad were included Afghanistan, Pakistan, UAE, Saudi Arabia and Qatar; however, eight countries are scheduled in his third visit that are Afghanistan, Pakistan, Saudi Arabia, UAE, Russia, Uzbekistan, Turkmenistan and Belgium).

Collateral to Khalilzad’s visit to Pakistan during his third visit to the region, BBC published a report quoting the Taliban sources where it had said that a few member of Taliban political office in Qatar has also attended Pakistan for the purpose of having talks with their leadership regarding the peace negotiations with America.

During his visit to Pakistan, Zalmay Khalilzad met Prime Minister, Imran Khan and Foreign Minister, Shah Mehmood Quraishi and had talks with Taliban on achieving peace. Khalilzad flew to Kabul after Islamabad and left for Moscow after meeting the leaders of the National Unity Government (NUG). In his meeting with Russian authorities, he discussed on expansion of cooperation between Russia and America for the sake of facilitating the ground for direct talks between the Afghan government and the Taliban and had called the visit “good” while talking to the media. Following the trend, Khalilzad visited Uzbekistan and, then, had a 3-day consecutive talks with Taliban in presence of representatives of Pakistan, Saudi Arabia and United Arab Emirates in UAE.

Generally, the third visit of Zalamy Khalilzad to regional countries regarding peace talks with Taliban have risen hopes on concluding an agreement resulting in putting an end to the Taliban war in Afghanistan. And, the important point is the talks will be continuing and they will have a positive result at the end of the day.

The recent 3-day US-Taliban meeting in UAE which was held in presence of representatives of Pakistan, Saudi Arabia and UAE is considered as an important step towards achieving peace. The reliable and further details of the meeting are yet to be known; however, the Reuters new agency has said that for the request of America to hold a 6-month ceasefire, the Taliban put two conditions on the table; first, to establish an interim government and second, Pakistan, UAE and Saudi Arabia to be guaranteer of the entire process. Nonethless, the Taliban has rejected these issues being discussed in Abu Dhabi talks and has emphasized that these talks were solely focused on putting an end to the presence of US in Afghanistan, freeing the Taliban prisoners as well as civilian causalities in airstrike of Afghan and foreign armed forces; and discussion around ceasefire, election or interim government is yet to be realized. Presence of America in Afghanistan is thr issue that the Taliban has always stated it as the greatest reason behind their fighting in Afghanistan.

Need to mention that the Afghan peace-related efforts and struggles are folded more than any other time and the hopes on finding a political solution to the ongoing war in Afghanistan are increased; thus, the recent talks were hopeful due to following reason:

First: Understanding the fact that the war and military pressures are not the solution to the Afghan issue, initiation if direct peace talks between US and Taliban and continuation of these talks is a positive point regarding the successfulness of the process as well as attaining a positive income; because the parties involved in the war, especially the US were focusing on war and military options in order to win the battlefield, but it has not got any other outcome except for escalation of war.

Second: Sincere cooperation of regional countries, especially Pakistan, is crucial to achieve peace in Afghanistan. Although, the efforts on grabbing regional cooperation are going on since many years; however, these efforts became folded after  the start of Khalilzad’s new mission and decision of US government to make negotiations with the Taliban. The United States tried to put pressure on Pakistan to cooperate sincerely in bringing the Taliban into negotiation table and the latest efforts of Pakistan are hopeful in this field (freeing the Taliban prisoners and optimism of Imran Khan on strengthening peace in Afghanistan) .

Russia is one of important regional countries and, thus, the United States is seeking to attain its cooperation in the Afghan peace process. Khalilzad’s visit to Russia and the latest meeting on Afghan peace in Russia, where representatives of 12 countries had participated in it, was hopeful. Meanwhile, Saudi Arabia is also among the countries that have impact on Pakistan and Taliban. (Recently, Saudi Arabia has provided Pakistan with billion of dollars, Pakistan has a mediator role in the Yemen-Saudi Arabia issue and also Saudi was one of the countries who had recognized the Taliban regime). UAE, Qatar, Uzbekistan, Turkmenistan amd Belgium are among the countries whose cooperation is needed to be attained in the peace process, based on Khalilzad’s mission. Moreover, sincere cooperation of these countries will  undoubtedly play important role in achieving peace in Afghanistan.

Last but not least, the Taliban inclination to keep the Afghan government far from the peace talks is the issue which has encountered the peace talks with a form of ambiguity. Although the Taliban had told media at the sidelines of the Moscow meeting that withdrawal of foreign forces from Afghanistan is one of their conditions for peace and when the issue is resolved, they will, then, conclude an agreement with Afghan parties inside the country; however, the denial of Taliban to meet the Afghan delegation at recent US-Taliban talks is a controversial issue.

The on-going war in Afghanistan has three dimensions: US, Taliban and Afghan government, hence, there is a need to have all three parties involved in the peace talks in order  to attain a single solution for reaching an understanding on putting an end to the Afghan war.