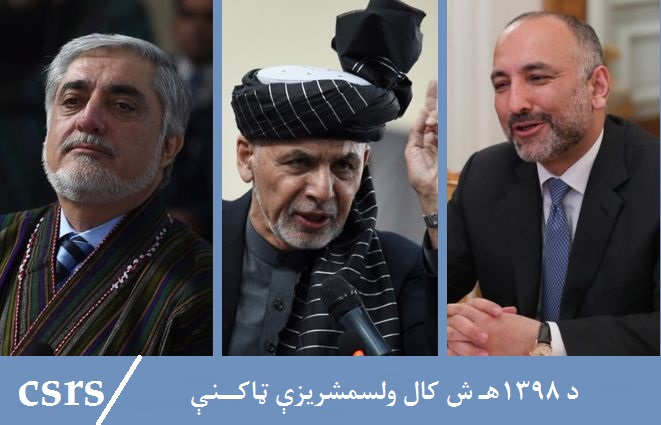 Based on a recent announcement of Independent election commission, the next presidential elections will hold on 20th of July, 2019. The candidate nomination process was scheduled to start on 22nd December, 2018 and end on 20th January 2019.

Among the eighteen candidates, some of the team formations and alliances appeared against the expectations, since there are amalgamation between individuals who previously had immense political dissensions and have accused one another many times.

The CSRS weekly analysis comprises a discussion concerning Afghanistan’s previous elections experiences, teams for upcoming elections and their formations, the current situation in the country and the fate of presidential election based on insight to the capacity of election commission

After the collapse of the Taliban regime, the first presidential and parliamentary elections were held in 2004, and 2005 respectively. At the time, elections were organized by the Election Organizing Office with cooperation of the United Nation.

Commission (IEC) was established. According to article 156 of the Constitution of Afghanistan, the commission is responsible to manage and supervise, and make decisions based on people.

The Independent Election Commission held presidential and provincial council elections in 2009. The election led to altercation between two leading candidates; Hamid Karzai and Dr. Abdullah Abdullah, which ended up with Hamid Karzai being selected as the president of Afghanistan.

The Independent Election Commission had led the 2010 parliamentary elections. In this election the issue of corruption was even more intense, to the point where a special court was established to investigate corruption.

During the 2014 presidential elections, the IEC faced serious allegations and accusations of corruption which were more than any other times. During the first round of elections, the leading parties were Ashraf Ghani and Dr. Abdullah Abdullah. None of the leading candidates had enough votes to succeed. The issue became more complicated during the second round because of the accusations of corruption. The conflicts finally ended with the arbitration of the foreign minister of the United States, John Kerry and establishment of Unity government.

Among the eighteen individuals who registered themselves for the entry of presidential elections in Afghanistan, some teams seem powerful and it can be very competitive during the elections. However, some are considered weak due to lack of their influence and political power. Overall, the eighteen teams are divided into two parts:

First: Among the eighteen teams, there are candidates who consider themselves worthy of presidency and are truly trying to reach the presidential palace. This type of candidates include Dr. Ashraf Ghani, Dr. Abdullah Abdullah and Mohammad Hanif Atmar who are involved in a serious competition and contest with each other.

Second: Some candidates who neither have the hope of success nor a chance to win. They have nominated to gain Fame and political concession. A number of teams might give up prior to the election for the benefit of other teams. However some who ran for popularity may try their luck in elections. Looking at the previous presidential elections in Afghanistan, it appears the competition will be very warm and strong. Overall in the previous elections, despite the number of the candidates, there were few strong teams. But this time there are many strong teams competing in the election, which none can win in the first round and the election will go to the second round.

The Afghan president nominates himself at a time when most of his former associates and strong members of his team have left him and are no longer his supporters. General Dostum who apparently obtained most of the votes for his team is supporting the opposition now. Mohammad Hanif Atmar who was his close ally and a threat to the opposition during the unity government is no longer around him but his opposition and in the coming election a strong competitor to Ghani. In addition, Ashraf Ghani’s other Allies and friends who were previously supporting him are now partners to other team which has made the competition more challenging for him.

During the previous elections, Ashraf Ghani obtained more votes from Pakhtun and Uzbek ethnicities. Since General Dostum is no longer on his side, Ghani has lost a huge share of Uzbek people. Moreover, the candidacies of Atmar and Gulbuddin Hekmatyar has reduced his share among Pakhtuns.

The former head of National Security, Amrullah Saleh who has previously seriously criticized unity government is now on Ghani’s Side. However, the support of Amrullah Saleh might not bring Ghani enough votes due to the division of Jamiat Islami members and their support from different election teams. Likewise, Sarwar Danish who is one of the few people who has continuously supported Ghani. Even though Ghani has kept him on his side to have the votes of Hazara people, but the support of Mohammad Mugaqeq from Atmar and Karim Khalili’ alliance with Dr. Abdullah has divided the votes of Hazara people.

Despite obstacles, the current position as the president gives Ashraf Ghani chances to win the elections. In addition, Ghani’s stress on having central government in the political system and elimination of chief executive’s position is a strategy which has attracted many followers.

Dr. Abdullah Abdullah is going to participate in the upcoming elections on behalf of Jamiat e Islami, Junbesh e Islami and Wahdat e Islami parties. His team has the support of famous political and national personalities such as Gen. Dostum, Mohammad Karim Khalili and Salahuddin Rabbani.

Besides Gen. Dostum and Karim Khalili, the support of Jamiat e Isami is another strength of Abdullah’s team. Although some key members of the party are separately supporting other candidates, but the leader of Jamiat e Isami party, Salahuddin Rabbani announced Abdullah as the only official candidate of the party. If the division and support of Jamiate Isami members from different parties is a secret plan and the purpose is to divide the votes of Pakhtun people among Ashraf Ghani, Hanif Atmar and Gulbudeen Hikmatyar, then Abdullah can be a strong competitor to Ashraf Ghani. However, if it is not that and the Jamiat members honestly support their teams, then it would be tough for Abdullah to compete with Ashraf Ghani.

With the slogan of “peace and moderation” Younus Qanuni, an important member of Jamiate Islami is first deputy and Mohammad Muhaqeq who is currently the second deputy chief executive’s office as a second deputy, and a strong leader of Hazara people. Similarly, “peace and moderation” team has the support of other political personalities such as Ata Mohammad Noor, Ismail Khan, Sabawoon, Zakhilwal and Said Ahmad Gillani, which has strengthened the Atmar’s team.

Atmar was an admired politician among the followers of Ashraf Ghani Durning unity government. However, after his disagreement with Ashraf Ghani and his speech in which he said “If I become a president, I will make adjustments in the Constitution, change the presidential system to partial presidential” have probably reduced his popularity among the people, especially Pakhtuns.

Although Hanif Atmar has the support of many well-known political, national and Jihadi characters, but the results of parliamentary elections exposed that people are no longer under the influence of these faces. They vote for candidates based on their personal decisions.

The Electoral System and the Election Commission

Although After the controversial election of 2014, one of the promises the leaders of Unity Government made was to improve the electoral system and hire new personal to the IEC. After a while from the formation of the Unity Government, President Ghani order, some changes to be made to the IEC and it was done. The IEC has started their work. But by the passage of time it seems the system is still weak in management and has lack of capacity.

The commission managed to held the election after three years delay in 2018 and was poorly performed. Its Weak administration, corruption and extensive frauds are issues due to which the commission couldn’t announced the final results of parliamentary election. Therefore, one of the huge obstacles for the upcoming presidential election are the Independent Election Commission itself and voting system.

The commission strived to use the biometric equipment for the Parliamentary elections, which however wasn’t a successful attempt due to poor management. The technical issues of using biometric system and unfamiliarity of people with the system were reasons of the unsuccessful implementation. This is considered another obstacle in the way to the presidential election. If the commission can’t successfully manage the biometric system for the next election, the results will be at least as controversial as the Parliamentary election results.

Besides all these problems, the security condition in Afghanistan is another challenge for the elections. Currently, around 45% of the region is not under the government control. The area which under the control is also not completely peaceful which can question the transparency of the elections.

The Future of Elections

Based on An insight to the political and security condition of the country and previous presidential election, the fate of the elections seems to be connected with the following issues:

Peace Negotiations: In order to end the current war, the United States and the Taliban are negotiating face to face since few months. Although after the Abu Dhabi meeting, there was a disagreement over the agenda of negotiations and the meeting was postponed for a while, but after Khalilzad visited various countries, has started last week. It is said that the parties had once again begun discussion on disagreements.

The former defense minister of the United States of America, Robert Gates in his book mentioned that: Obama’s administration wanted to interfere in 2009 elections, postpone it and help the opposition to succeed. The writer says that the government of Obama wanted to cast out a president of an independent country.

The 2014’s elections had similar results. Although the commission had dozens of foreign supervisors in every department, but the results were still criticized and led to discords and finally ended up with the arbitral of John Kerry.

The future of the presidential elections is again considered to be connected with similar issues. If the commission actually carry out the elections on the scheduled date, it would be better for  the candidates teams to accept the votes of the people and not let the foreigners to corrupt or facilitate corruption in elections. End