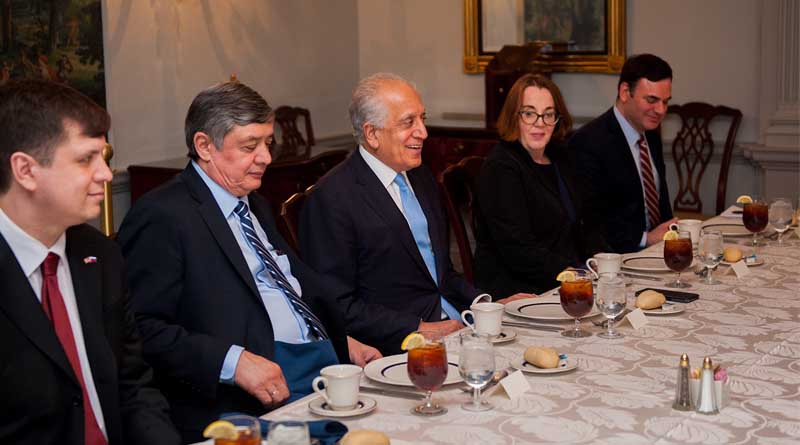 The U.S. officials had a two-day discussion with Russia, China and representatives of the European Union a few days ago. Regarding the meeting, Zalmai Khalilzad in his twitter said “We respect the independence of Afghanistan. We want peace for Afghans and want Afghanistan to become country which never turns into a threat for us.”

The U.S. Department of State in a proclamation about the meeting said that their representatives have met with the officials of China, Russia and the European Union about peace, prosperity and security of Afghanistan. The proclamation states “We have absolute respect for independence of Afghanistan and the country will decide about their politics, security and economy”.

Meanwhile, Zamir Kabulov, Russian Presidential envoy to Afghanistan consequent to the two-day meeting said that after foreign forces pullout and ceasefire, war will not return to Afghanistan.

Here, we discuss the significance of regional countries in Afghan peace process, their interests, and the need for coordination between the United States, Afghan government and the countries in region.

Although the interests of regional countries differs and challenges for Afghanistan have thus increased, but countries altogether still agree for peace in Afghanistan.

Russia and China for instance do not want U.S. presence for long or medium term in Afghanistan and therefore supports the US-Taliban talks. However, quick U.S. pullout also threatens their interests since it will cause absence of authority in Afghanistan and concerns are that Afghanistan will face crisis like 90s.

In addition, Pakistan does not like friendly relations between Afghanistan and India and does want their links to remain friendly. Reduction in India’s influence according to Pakistan can happen when Taliban reaches power.

Similar to Russia and China, Iran is also worried about the presence of U.S. in region. Moreover, all three countries have concerns that the U.S. might be supporting ISIS. Consequently, they were forced to build connections with the Taliban so that they can pressure the United States.

Significance of Regional Support for the Afghan Peace

Although the current US-Talliban negotiations for Afghan peace become hopeful day by day, but the significance of regional countries in the process cannot be neglected. A look at the complication of ongoing war in Afghanistan will confirm that the support of strong regional countries is vital for peace and security in the country and obtaining their support can help the peace process.

In addition, assumptions are that if the U.S. and the Taliban reaches an agreement, strong countries in the region will get involved to guarantee its implementation. Regarding this issue, Zamir Kabulov, Russian presidential envoy for Afghanistan after Khalilzad’s meeting with Chinese, Russian and EU officials told news reporters that the Taliban strives to ensure that Russia and some other countries will guarantee the possible agreement with the United States.

Besides, the Taliban also need regional countries who can guarantee them for the international community.

The greatest challenge for peace in Afghanistan is fitting all the interests of the Afghan government, the United States and regional countries inside a single frame for the success of the process. Khalilzad’s numerous travels to the countries in region, meetings with the Afghan government officials and politicians and discussions with the Taliban were for the same cause.

Khalilzad’s recent meeting with Chinese, Russian and EU officials were also a key step for the success of US-Taliban peace talks. These efforts were to eliminate incredulousness and reach a new stage of peace negotiations.

Since the strategies of the Taliban and the Afghan government regarding peace differs, apprehensions have thus raised. The Taliban want to reach an agreement with the U.S. about the pullout and not using Afghan soil against the U.S. and international community. They want intra-Afghan talks with political and Jihadi parties instead of Afghan government. Moreover, ceasefire is another complicated factor which might be negotiated after intra-Afghan talks.