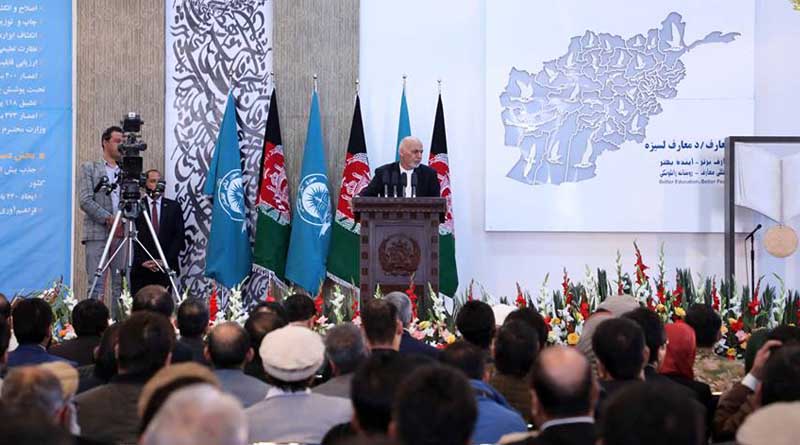 President Ashraf Ghani inaugurated the new school year of 1398 by ringing school bell and with the motto of “better education, better future” at a period when the prior undertakings of the government for the enhancement of the sector have not been executed and still faces plenty of obstacles.

During the ceremony of ringing the new school year bell last year, president Ghani promised to construct 6000 new schools and allocate 200 million U.S. dollars for building new schools. During the ceremony of 1398 However, He said “Provision of budget and facilities for 6000 schools is not easy, but vital steps have been taken and the stage of substantiation has come.”

Here, we discuss the condition of education in Afghanistan, government’s promises and the existing problems and challenges in the sector.

Current Condition of Education in Afghanistan

An insight to 17-year history of education indicates that the focus was on quantity. Due to absence of attention, quality has become biggest challenge that the sector is currently facing and has created numerous obstacles.

On the other hand, only 55% of land is under government’s control according to SIGAR’s report published on 30th January, 2019. The remaining land is under militant’s control. Although Taliban has banned girls’ schools in their regions, but overall allows educational operations. Therefore, the authority of the government and the Taliban over educations institutions has created a lot of challenges and the clash of decisions has disordered the progress of education.

In addition, around 7.3 million children eligible children are deprived from education and school according to the statistics of ministry of education. Moreover, the education sector is facing many problems and challenges which mainly are: war, insecurity and corruption. Absence of professional teachers, specialized staff, buildings, lack of books and other materials, unstandardized exams, limited and imaginary number of schools, glitches in curriculum and feeble administrations are other difficulties that the sector is currently facing.

With the establishment of unity government, president Ghani stated that the current condition of education is unacceptable for him. He promised that he will strive to work on quality improvement of education, unpoliticalizing sector’s progression, enhancement of teachers’ condition, and participation of women in strategic field of education. After one and a half year in 1395 however, he apologized for his inability to complete his promises and stressed on their achievement.

A year later in 1396, besides prior problems such as insecurity, corruption, lack of facilities, absence of professional teacher and others, the sector faced new difficulties which were mostly in regions which were under Militant’s control and the number of closed schools also increased in insecure areas. Afghanistan human rights commission at the beginning of 1396 announced that only 7 out of 318 schools in Arozgan province are active and the remaining 311 schools are closed due to insecurity. In addition, Ghazni, Kunduz, Zabul, Paktia, Helmand, Nimroz, Farah, Badghis and Nangrahar are among the provinces where 1000 doors of schools are closed, according to the officials of ministry of education.

The active schools also have serious problems such as lack of professional teachers, study materials, buildings and presence of corruption.  Most of the time it is reported that Islamic scholars teach science subjects and the students lack materials such as books, library, laboratory and other.

During 1396 academic year ceremony, Sarwar Danish, second vice president said that despite spending millions of dollars, 50% of schools in Afghanistan do not have standard buildings which is a shame for Afghanistan in this era.

After two years of unity government during ringing school bell ceremony in 1397, Ashraf Ghani announced the year as the year of support from education and ordered all ministries to comprehensively support education and keep education at the top of plans. He also emphasized to provide internet services for schools in the capital and provinces. In addition, he stressed on promises made regarding the salaries of teachers and underlined its implication until 27th Asad, 1397.

Promises made in 1397 by the president were also not completely implemented. President Ghani emphasize on their implementation in the beginning of new academic year of 1398. For instance, President Ghani in 1394 said that he will resolve residence problem of teachers within six months. However, he once again recently said that final decision will be made regarding their residence within three months. Additionally, he said that assessment of teachers’ salaries is also in his working plans.

Furthermore, educating 100 thousand teachers till bachelor degree, 57 thousand till 14th grade, recruitment of 11 thousand new teachers, improving quality of teaching, provision and distribution of books to all students, provision internet and fiber Noori services to around 1300 schools and eliminating violence from schools are undertakings that president Ghani promised to execute.

Beside the challenges and problems, Mirwais Balkhi, minister of education spoke about the achievements of the sector. He addressed that unpoliticalizing education, commencement of biometric system for 270 thousand employees, attraction of 3.7 million deprived children to education and literacy for thousands of people are the achievements of ministry of education and emphasized that around one million more new children will be absorbed during the year.

Besides constant promises and undertakings of the government for improvement of education, the sector still faces plenty of challenges which threatens the progress. The following are some of the challenges:

Insecurity: War and insecurity are challenges that the education and other sectors are facing. According to UNAMA, 2018 was the bloodiest year for the people of Afghanistan in which 10 thousand people got killed and wounded.  Moreover, based on information ministry of education, around 400 schools have been closed due to insecurity.

Corruption: Corruption is another obstacle for education in Afghanistan. The anti-corruption joint independent committee at the beginning of new school year announced that there are still many glitches in education sector. It will have severe effects if actions are not taken. The committee in Aqrab, 1396 warned that the widespread corruption in education is alarming. The report published by the committee stated that the issues of corruption in teacher hiring process, selling school books in market and problems in salary distribution of teachers have had negative effects on the education of the country.

Poor quality: After insecurity and corruption, quality and poor standards of education in another key challenge facing the sector. According to the statistics of ministry of education, 27% of 70000 teacher, minimum requirement for hiring a teacher is baccalaureate certificate which along with other reasons is a cause of poor quality. In addition, the sector lacks around 90 million books and 70 thousand teachers, based on reports of ministry of education.

Weak management: Absence of executive capabilities in the capital and provinces is another obstacle for the sector. Due to lack of potential and experts, recruitment of unprofessional individuals and presence of corruption, the sector faces the challenge of administration.  Therefore, the sector firstly needs reformation in management system and secondly requires a comprehensive, systematized and national strategy to resolve the current problems of the sector.