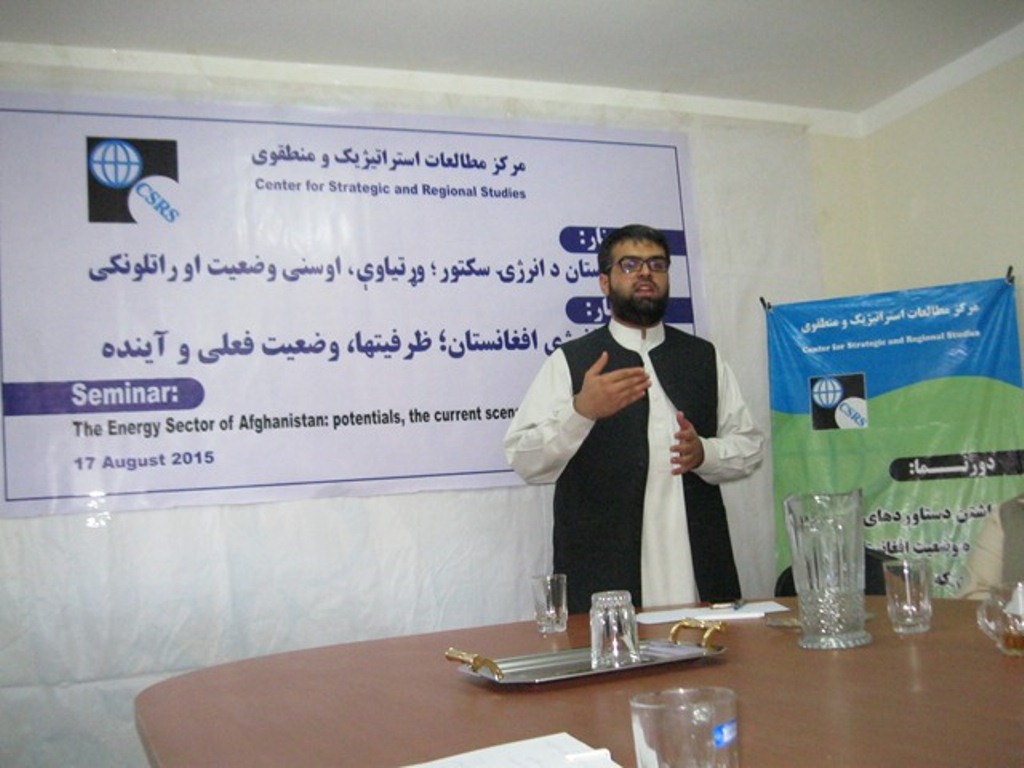 On August 17th, a seminar on “The Energy Sector of Afghanistan: potentials, the current scenario and future prospects”was held by the Center for Strategic and Regional Studies (CSRS) in the Capital Kabul, Afghanistan. The seminar was presented by Eng. Mohsin Amin, energy specialist and member of the academic board of CSRS.

Dr. Abdul Baqi Amin, director of CSRS inaugurated the seminar and said that it is our national and Islamic duty to stand on our own feet; therefore, we have to manage our domestic resources well in order to become self-reliant and fully independent.

Then, Eng. Mohsin Amin shared his information and analysis regarding the importance, resources, potentials, the current scenario and future prospects of the energy sector through a presentation with the participants.

Eng. Mohsin Amin said, energy is the second priority of the Afghan government after security.

Eng. Amin, considering the Master Plan of electricity, said that Afghanistan would be able to produce its 67% of needed electricity through its internal resources by 2032; however, this project needs 8-9 billion dollars to be spent on, and I hope that the government of Afghanistan would find a way to tackle the pressing issue, he added.

Eng. Moshin Amin talked about CASA-1000, TUTAP, and TAPI projects that transmit energy from Central Asia to South Asia and include Turkmenistan, Uzbekistan, Tajikistan, Pakistan, Afghanistan and India, also. Each one of these projects passes from Afghanistan and so it is needed for Afghanistan to take maximum benefit from such regional projects, he added. He further said, from the CASA-1000 project the government of Afghanistan can receive 35-40 million dollars in revenues from the transit fee. Similarly, TAPI can generate revenues around $450 million per anumm.

At the end, Eng. Amin answered the questions of the participants, also.

Need to mention, related specialists, analysts and students were participated in this seminar and considered it as a positive step in field of energy and said that the presented information and researches were so interesting and useful.