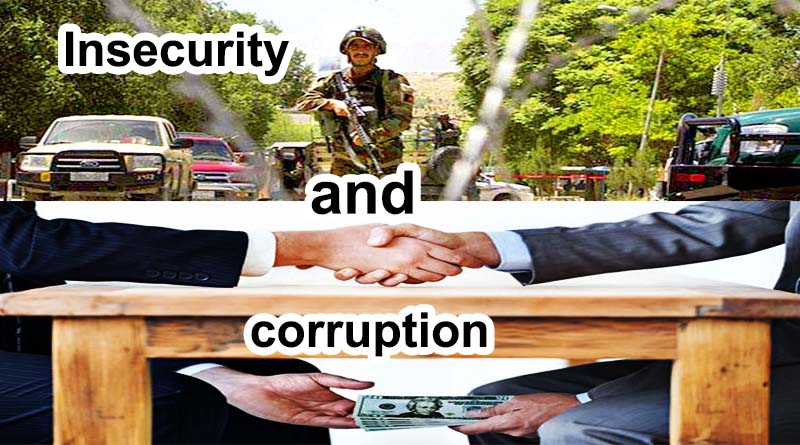 The International Institute of Economics and Peace, headquarter in Sydney, Australia, recently announced that Afghanistan is ranked 163rd in the list of countries in the world after the Syrian, Iraqi, Yemeni, South Sudan and Somali as the most insecure in the world. This is happening where peace talks between the Taliban and Mr. Zalmai Khalilzad, the Special Representative of the United States of America to the Afghan Peace Process, have been taking place in Qatar for several months, and the green lights on both sides have shown progress in these dialogues.

The institute annually publishes a ranking list of countries based on their peaceful status, which addresses the state of peace, its economic costs, and how to strengthen peace in different societies

Criteria for evaluation and reviewing

(Institute for Economics and Peace, Australia)

In Global Peace Index 2018 which was conducted by the Institute for Economics and Peace Australia based, Syria recognized as the most unsafe country of the world, but intensification of the war between the afghan government and the Taliban in the past year and that is why the number of civilian casualties on both sides increased, beside of that there was some other reasons also which caused the position of Afghanistan, instead of Syria, is at the top of the list of the most insecure countries in the world. In the first weeks of 2019, the United Nations Office at Afghanistan (UNAMA) announced that 2018 was the bloodiest year for civilians, with civilian casualties raised by 11 percent, over 3,000 individuals per year.

The institute examines the level of insecurity in countries in three stages:

First: Security and safety in the community, Second: Domestic/international violence, and

Third: The level of militarism in it.

Now, with the above criteria, if we have a quick look at the situation in Afghanistan, That how much the level of insecurity in the country raised.

Reports indicate that there are daily several kidnapping, murder and other crimes per day in Kabul. This is affecting the normal life of citizens’, social and psychological security, and safety of the individual and threatens at any moment.

Factors of insecurity in Afghanistan

Insecurity is not a phenomenon that only has a relationship with politics and militarism, but its main roots are from a cultural context, and its outgrowth forms social and economic factors. Corruption in its various forms in the political system, the rivalry between its international intelligence agencies and their regional partners , drug trafficking and the illegal extraction of certain mines by international mafia bands in collusion with local traffickers, especially those that are in the grip of the Afghan government they are considered as insecure political factors in the country .

Local traffickers, on the one hand, are associated with international mafia bands and, on the other hand, with corrupted individuals and circles inside the system and in the Taliban groups, whose interests are in the event of continued war and insecurity in Afghanistan. The interconnection between internal and external mafias, especially in the cultivation, production and trafficking of narcotics on the two sides of the battle line , is so strong that the multi-year activities of the Directorate of Counter Narcotics, Ministry of the Interior affairs as has not been able to affect it.

Rural life and lack of necessary facilities in life, the excessive distance between urban and rural life, illiteracy, lack of awareness of the law, incorrect social and religious beliefs in society, gender based discrimination, domestic violence and abuse against women, and other issues of this kind, are among the social factors in insecurity.

The above Social factors, Conflict in the minds of youth in the community uninformed natural growth and naturally encourages to war and violence; However the abuse, humiliation, violence against women and women’s human rights  maliciousness and ugly actions of men , with religious misconceptions  Is justified .

Poverty and unemployment, and low monthly income of individuals and families, have led some young people to migrate out of the country in recent years, some of them addicted to drug, and some majority joined the army and the movement of Taliban or other movements. Some of them started robbery, kidnapping, murder, rape and other crimes. According to the National Security Advisor of Country, daily average, 50 individuals lose their live (soldiers of the armed forces and civilians) as a result of military operations by armed groups in Afghanistan, but the reality is somehow different that true demographic loss of life and property damage caused by the ongoing conflict in the country, much higher than the report of media.

As you can see, the United States has decided to negotiate the Taliban on the peace process by establishing a global and regional consensus for peace in Afghanistan. However, as can be seen, multiple complications and intervention of major world powers, so that is why it is difficult to achieve peace in this country.

Apparently, the United States of America during six rounds of talks with the Taliban, the pre-condition of Taliban was the withdrawal of NATO troops from Afghanistan, while a short timeline, is accepted. However, perhaps the increasing influence of ISIS in different provinces may be a reason for their stay in Afghanistan. One of the conditions of US is to do not be threatening from the territory of Afghanistan to expel their troops from Afghanistan, If ISIS is active in this country, and it is natural that America’s interests will be threatened.

It clearly visible from Mr. Khalilzad’s talks with Taliban representatives in Qatar: There is no close understanding and close coordination between the Ministry of foreign affairs and its intelligence agency in the Afghan peace process. The State Department and the White House are trying to be in peace with the Taliban and to make it one of their achievements of their nation during the country’s 2020 presidential election campaign, but the role that the main designers of US foreign policy are to prevent globalization. The Chinese economy, Russia’s unpredictable military development, Iran’s lack of nuclear weapons, and other issues in the region are different from the views of President Trump and indicate the long-term presence of the United States in Afghanistan.

The Taliban believe that ISIS is a Western project and an excuse for the long-term presence of NATO in Afghanistan .According to the Taliban, Westerners, after failures in Ukraine and Syria, have decided to build Central Asian countries to the Russian border insecure. If the United States withdraws from the region, the Taliban will be able to eradicate ISIS roots from Afghanistan with the support of region countries, which may have agreed upon the same.

Americans say to the Taliban that ISIS is considered a threat to the United States, as it threatens the interests of Afghanistan, so that the US military withdrawal table will be adjusted in such a way that until the withdrawal of the US military from Afghanistan, the roots of ISIS in this country is also being completely destroyed. In that case, the Taliban’s prediction is that a clear, guaranteed agreement with the Afghan political parties, which is likely to be organized under the aegis of the United Nations in one of the European countries, will enter the system without any disarmament.

Consequences of insecurity in the country

Security is the most important element for the development of various political, economic and cultural spheres, access to services, lawfulness, the strengthening of foreign relations, and, finally, state- building and nation – building. In the absence of security, the law cannot be ruled out in the society; Corruption will take place in the system; Children and adolescents are deprived of literacy; Investment will be eliminated; Needed health services will not be provided to the citizens; The scope of poverty and unemployment are expanding; Justice, Freedom Equality and other human values will be questioned, and various other problems will arise. Therefore, priority should be given to peace and entered the field with realism. Maybe the hasty rush and early optimism will bring other problems instead of peace.