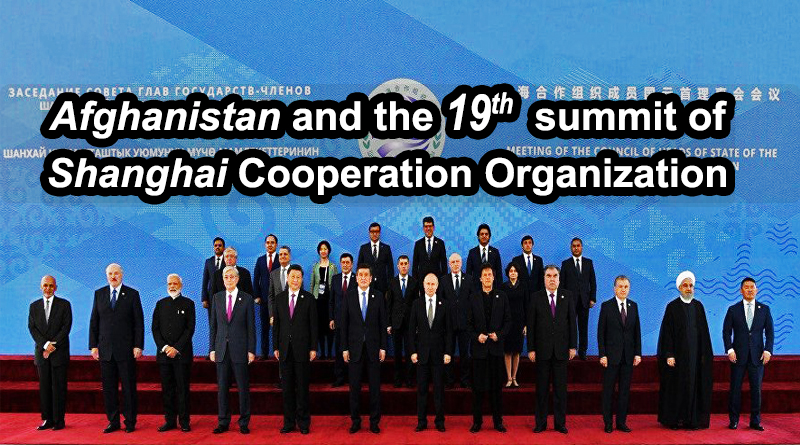 What is the impact of SCO and Afghanistan on each other’s? What is the regional and international role of this organization? What role can be done in the Afghan Peace process and finally the assessment of 19th summit are analyzed here.

Even after the collapse of Soviet Union China had issue of 7000 km joint border with number of countries such as Russian, Kazakhstan, Tajikistan and Kyrgyzstan, and these problems may face China’s relationship with threat, because of the same dilemma China and Soviet Union had serious conflict upon the same and even they enter to the war.

China and four other countries (Russia, Kazakhstan, Tajikistan, and Kyrgyzstan) in 1996 a joint meeting held for the purpose of betterment of relationship and is particularly aimed at resolving border disputes. Finally, they ended up with the formation of the SCO 5 organization, and the SCO-5 organization was able to resolve the dispute of the border with in the short period.

After the settlement of the border dispute, a friendly environment was formed between five member states, Members countries of the organization focused on the presence of extremist groups inside the region, especially in Afghanistan, and preventing joint combat and cooperation against them. In addition to the meetings between some other agencies including Foreign and Defense Ministers , Besides regional security and stability, about joint work in consultation with terrorism, drug and arms trafficking issues, and no availability of nuclear weapons in Central Asia, and economic developments have been undertaken in the list of priority.

Uzbekistan received a membership of Shanghai 5 organization on 15th July of 2001, and the same organization was officially named as the Shanghai Cooperation Organization.

Worldwide, the Shanghai Cooperation Organization considered one of the valuable and top organization, and currently we can name it one of the largest organization after United Nation, Which involved 44% of the world’s population, This organization takes steps from time to  time towards development, and the two strong South Asian countries(Pakistan and India) Including four in the world Nuclear weapon states and accession countries  are with them, Turkey and now the organization is called the dialogue partner, and China is happy for them.

SCO member states( RATS ) Or Regional Anti- terrorist Structure Or (regional counter-terrorism framework) They were able to counter 20 big attacks of terrorist, 440 training centers, around 1700 international terrorism and  discovered 3250 explosive devices were captured in the period of 2011 to 2015 Years, So this SCO is having a wider role in the region and create instability in mistrust among member countries, and this has to continue the collaboration between member countries.

In addition to this in ( 2015 ) summit these decisions are discussed, members state need to share all information about the terrorist centers , the terrorist activities and terrorist financing support resources and information, thereby members countries share with each other, to take joint decision, to save several regional instability.

According to the Statement of SCO, the members’ countries are cooperating in the following areas to take positive steps in building trust in the region and on the other hand, the region resides from conflicts:

Economic cooperation: Shanghai as regional cooperation organization, not only in the region, but internationally want free trade, economic stability, and to continue reconstruction and cooperation in the global economy and trying to eradicate restrictions against trade.

Cultural Cooperation: The only reason that has established confidence among the member states of this organization, and resolved the path to joint cooperation was reminded of cultural, scientific and scientific cooperation. . There can be rich cultural heritage and cultural cooperation between Central Asian countries, cultural representations among member states and solutions to problems, and this could have a great role in reducing and closing the distance between the people.

On 13th and 14th of June of this year the organization Held In addition to the regional security, the fight against drug trafficking, economic development, industry, situation in Afghanistan, and the position of Iran’s nuclear deal, besides regional security, has been backed by the country, There were issues that discussed in the summit.

China in the area of investment, and the Asian markets are seen communicating to their supply of goods determination, is very interested, from Kabul, as in ( 2012 ) they have supported as an overseas country , it also comes to membership, but on the other hand, it is still very important for Afghanistan , because Kabul can prevent narcotics cultivation and trafficking in cooperation with the Memorandum Organization , In Afghanistan some groups are not just fighting to get the support of Afghanistan, but the other countries at risk to regional security, and economic development.

Afghanistan’s President Mohammad Ashraf Ghani recalled the major threats against the members of terrorism, terrorism and war-memorandum organizations and observers in his speech to the Shanghai Cooperation Organization’s Nineteenth Summit, and reminded the country’s security forces, In Farah province (53) labs were destroyed , and nearly 1 billion us dollar was the loss to them. And explained that the country has strong intentions to drug.

The Shanghai cooperation Organization, which has a special significance on the region and on the globe, and Afghanistan, between South and Central Asia, some of its members countries, can be located in the vasel area, as soon as possible, this organization should be guided, and it can be helpful, besides the peace issue of this country, border issues and economic developments.

After the membership of Afghanistan, it can be easily accessible to our border activists, and because the Shanghai Cooperation Organization ( 2015 ) In a meeting held in the meeting, once again, the border issue between the member states will be resolved, and the member states will strengthen their border force in order to prevent international terrorists. So therefore the membership after the country can bring in neighboring countries, and in particular of the pressure arm and cooperation organization in Pakistan and Iran, and to play an important role in peace process of Afghanistan.