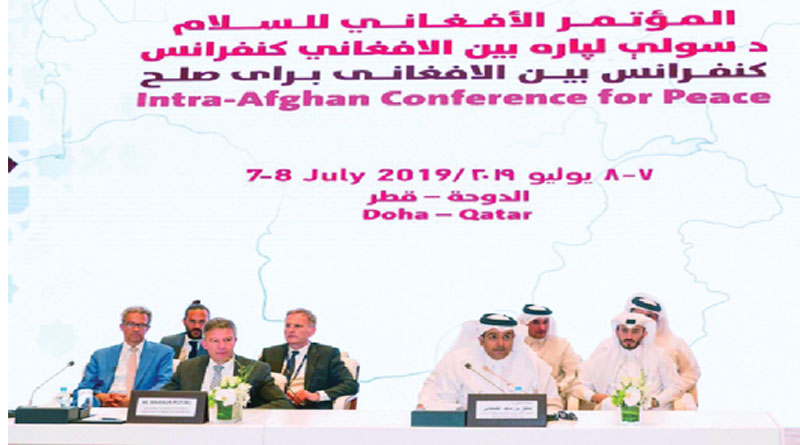 To ended up the Afghan war, in the 7th and 8th of July, was conducted intra-day meeting between Taliban, many Afghan government officials, politicians, civil activists.

From Kabul to Doha visiting delegation had included 53 people, including women, had a 17-person panel of groups including the Taliban side in the talks. The meeting, which was held in Germany and Qatar, was concluded by the two sides as part of the agreement.

In this analysis, we tried to express of Residing in connection with peace background, the Doha conference results, reactions and whether this meeting will pave the way for talks between the Afghan government and the Taliban?

Through the international dialogue, efforts have been made for nearly a decade to end the ongoing war in Afghanistan. In the international conferences that have been held in Germany, Turkey, Norway, and meetings with the Afghan political forces, they have tried The National Unity Government has been increasingly accelerated.

A few months ago (2019 in month of February) in the Russian capital Moscow, the first time the Taliban representatives and some Afghan politicians, world leaders and including President Hamid Karzai, former senior government officials the two-day bilateral meeting on Afghan peace talks, which was finally published jointly by participants.

That the Afghan government decided to attend its meeting with representatives of its representatives, provided a valuable opportunity for the success of this series; However, in spite of this, the various obstacles caused this conference to be delayed.

Also, the percentage of Russian political relations Extermination celebrations this year on month of May was held on Moscow hosted the meeting. It was similar to former Taliban officials, including Mullah Talib Akhund and some senior Afghan politicians, jihadist leaders and former President Hamid Karzai, including senior government officials Had In addition to the Afghan-Moscow relations celebration, Afghan Tourism and Taliban officials were convened for the second time on the Afghan Strait.

The ceasefire about important issues as both sides peace, civilian protection of life, the prisoners related issues, from Afghanistan from foreign troops leave, banning foreign interference, the stability of the system, national Governance, territorial integrity, compulsion of national unity, women’s rights and other issues have beneficial and conservative discussions.

Meeting between Afghans in Doha

It was scheduled to be held on 20th of April and at the beginning of the peace talks, an international convention in Doha capital of Qatar, but there are differences between the participants involved in this meeting that this session is delayed.

After a long delay, an international conference was held on 7th and 8th of July, In Doha, in the capital of Qatar, Qatar. In this meeting, the Taliban, some Afghan government officials, tourists and civil activists Had a part. Prior to this meeting, the talks between the Taliban and the United States held a round of discussion that US and Taliban talks delayed for two days, and the US and Taliban talked back to the two- day delay.

Also the participants showed prospects in accordance with the end of the meeting and added that this meeting was the last intra meetings that the profile is made is very constructive and good atmosphere in Moscow Afghan crisis the solutions were reused and constructive discussions between the two sides that were available to the majority opinion in the friendly methods.

The session was held on a 8th of July, after the two-day debate, the wounded up the meeting at late evening on Friday with a joint statement.

Responses to the Doha Conference

He described this statement in Doha after ending two days of bilateral talks with the Taliban and after publishing an agreement. Zalmai Khalilzad said in a tweet: “It’s half- night and the Peace International Conference on Endangered Air Force.” I talked to all participants, the representatives of all the Afghan community members, senior government officials and a joint understanding of the Taliban. I thank the organization of this conference from Qatar and Germany “.

The Afghan government also held a joint statement of the International Conference on Doha in Doha. Presidential Palace said the meeting was positive and grazing is expected to begin in December, formal talks between the government and Taliban.

At the end of Qatar’s Qatar and Afghan summit, Afghan officials expect formal talks between the two months to be held in a half month.

President Ashraf Ghani’s spokesman Sediq Sediqi said in a press conference: “The Afghan government is completely in a progress about peace talks.” According to him, ongoing talks and efforts are the rest of the other.

This informal meeting, the participants had to individually participate in the session said the Taliban political office spokesman Suhail Shaheen in talks with the BBC.

Who were each personally not disclose its opinion extermination crisis is reaching the end and peace in Afghanistan and is inaccessible to end the occupation in Afghanistan our official status and permanent peace.

A brief review on the decision:

The two-day Doha Summit in Declaration is the article 9 that emphasizes the need for stability in negotiations, while emphasizing the face of talks between the US and the Taliban. Similarly, the resolution also emphasizes that this is the way to reach a lasting, global and honorable peace in Afghanistan “all-inclusive intra negotiations”.

Besides that in this agreement a number of important points that was similar intra less attention in the past negotiations, as follows:

Although the presence of a two-day international conference on Doha, the Afghan Taliban and the Afghan government had been asked by various activists and peace activists, to propagate a war against propaganda, instead of one another. Use it to make a difference in front of a few conversations. But these demands were not accepted much.

But now it is the first time that the Afghan Taliban and Afghan consulate emphasize using a formal lecture on soft-spoken languages in formal negotiations aimed at adopting international negotiations in a written letter.

In the past eighteen years, most grievously ravaged public institutions and the public is reached. The United Nations 2017 report to date 70188 civilians was killed and it has been the figures in recent years compared to other years. The landing discrepancy against different directions as UNAMA management attention from both sides to protect the lives and properties of civilians during the war was asked few times to also address the situation immune attention to welfare institutions and prisoners.

But now it is the first time in a decision-making letter by Afghan politicians and Afghan Taliban to release prisoners of illness, immune and illness. Security guarantees of public-welfare organizations such as religious and religious centers, hospitals, markets, water closures and workshops. The commitment to protecting people’s respect, life, property and homes, and civilian casualties has been emphasized on reducing zero levels.

Some minorities in Afghanistan live shortly. Although were in their rights to special attention in past governments and the national unity government also has special attention to the rights of minorities and Hindus and one seat to the stage Knowledge Hindu minorities also been added, but still It is worth mentioning that religious and religious minorities have been affected by the current security situation. In addition to the Afghan Taliban’s Emirate There was no proper treatment of some religious minorities. Meanwhile, one of these minorities in the country is facing some concerns despite ongoing peace negotiations.

The decision-making also was respected and safeguarded for minority religious and religious rights, as it was considered to be a good development in the safety of minority rights.

In the beginning of the National Unity Government, the Afghan government started a series of international conferences called “Kabul Process” after various efforts from the establishment of a consensus on the Afghan peace-related region. Afghan government led initiative and management of the process and started implementing the decisions were in the hands of the government. In the second session of this series, the Afghan President sets out a political and legal framework for peace talks, recognizing the government of Afghanistan, in order to ensure security of all reconciliation, especially the reconciliation Taliban, for security and social development. implementation of programs, to attract international support for peace and a comprehensive implementation framework through emergency, short term, and elected term conditions and objectives in all areas of development to create an effective mechanism for monitoring and evaluation that Access to the peace negotiations or peace with the Taliban as leaving the highway (map) result.

To facilitate the way to international interaction, the Islamic system in Afghanistan, in the beginning and implementation of the transition to the average peace, peace process and monitoring of peace treaty, basic institutions, defense and other National institutions that are owned by all Afghans, after the reconciliation process, reinforce the necessary reforms and strengths, to return to their displaced families, as refugees from the Afghan refugees and their displaced families, after the peace treaty with donor countries. Regarding the new cooperation and relations of cooperation, international guarantees in the International Conference on Afghanistan Supporting Afghanistan’s peace treaty has been emphasized on the international conference in the context of regional, neighboring countries and other non-interference in Afghanistan.

Same figure A few months ago (2019 in February) that the first time the Russian capital Moscow, discussed directly between the politicians and the Afghan Taliban issued his declaration as a result of this the decision is not fully supported.

Approval also decided to nominate meeting in Moscow signed; and all participants agreed the Islamic Conference, United Nations, Security Council, European Union and neighboring countries that the Doha intra About Peace Meeting decisions should be supported and supported.

During the second round of negotiations between the Afghan Taliban and the US, the Doha International Conference on Doha was welcomed by the various sides of the country and abroad, and the results of Afghan peace once again Resigned.

Also in the meeting at the points that had previously been controversial, now the Afghan Taliban and the Afghan Convention have reached the agreement that emphasizes the importance of maintaining Islamic values and human rights in Afghanistan, for peace talks, Fighting parties have demanded no use of language, attacks on civilian facilities and public places and reduction of violence throughout the world.

The first International Conference on Peace in Moscow in Moscow, and now a meeting held in Qatar has done much to bring permanent peace in Afghanistan, and the two sides have pledged to do so until then. It remains bound to be bound and implement a plan for implementation, these goals will be fulfilled and permanent security will be held in Afghanistan.