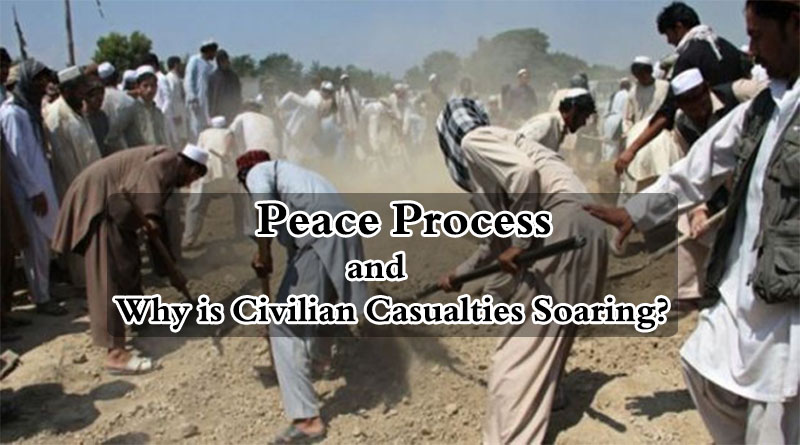 The United Nations in Afghanistan reminds all parties to the conflict of their responsibility to protect civilians and to comply with their obligations under international law, as the latest UN documentation shows that civilian casualty rates returned to record high levels in the month of July.

Civilians bore the brunt of escalating violence in July, with preliminary UN findings showing that more than 1,500 civilians were killed and injured, the highest number of any month this year, and the highest number documented in a single month since May 2017. The main driver in July was a sharp rise in civilian casualties caused by Anti-Government Elements (AGEs).

“As peace efforts have intensified in recent weeks so too has the conflict on the ground,” said Tadamichi Yamamoto, the Secretary-General’s Special Representative for Afghanistan.

“I call on all parties not to ramp up military operations thinking that doing so will give them a stronger position in talks about peace,” said the envoy, which is also head of UNAMA. “Escalating the conflict will have one primary result: greater loss of civilian life. Now is the time to demonstrate restraint and real respect for the lives of ordinary Afghan civilians.”

Why are civilian casualties soaring during this hopeful phase of peace? Global, regional and domestic causes are analyzed in this analysis.

While reports about promising and good developments come after meetings and meetings between Taliban leaders and US officials on Afghan peace, violence on the battlefield has also increased at the same time. At least 3,812 civilians have been killed or wounded in Afghanistan’s war in the first half of 2019, the United Nations said, noting a big increase in the number of casualties caused by government and NATO-led troops. The UN Assistance Mission in Afghanistan (UNAMA) called the toll “shocking and unacceptable” on Tuesday, and urged parties to Afghanistan’s 18-year war to heed a demand from Afghan delegates at a recent peace conference in the Qatari capital, Doha, to reduce civilian casualties to zero, The UNAMA report said 1,366 civilians were killed and another 2,446 wounded in the six months to June 30.In that period, the Taliban and other armed groups caused the majority of civilian casualties, but Afghan and NATO-led forces were responsible for more civilian killings, it said.

The benefits of regional and international powers are now more apparent in Afghan peace than ever before, and any country that sees itself as more competitive than its regional and international counterparts in Afghan peace is more interested in Afghan peace. Cooperation is threatening, and on the other hand, wants to address its regional problems with Afghan peace in order to solve its problems in return for Afghan peace. For example, the United States was keen on a third standoff between India and Pakistan in the Kashmir issue so that Pakistan would assist this country in the withdrawal of US forces besides Afghan peace, as well as a recent Pakistani side to the US. An important aspect of the travel agenda, called for cooperation in Afghan peace, was that the country would receive American attention and assistance in the Kashmir issue. Although initially President Donald Trump explicitly called for assistance to Pakistan in the Kashmir issue, India not only reacted to it, but also saw India make its final decision on Kashmir. , And Pakistan also called the decisions related to the Afghan peace issue, and threatened to co-operate in Afghan peace, thus, once again, peace in Afghanistan became a global and regional competition, leading to widespread violence in Afghanistan, resulting in civilian casualties.

However, interfaith talks were held in Doha along with talks between the United States and the Taliban, and it was promised that government forces and the Taliban would take drastic measures to reduce civilian casualties. But it has been seen recently that violence has intensified and most of the victims of the ongoing war are civilians. The escalation of violence in this ongoing peace process is not surprising, as it has proved on the world stage that whenever peace talks between the two sides begin, violence pushes on, and all sides try to make your side look powerful and gain more privileges. The Afghan government and the Afghan Taliban also want to show them powerful and gain more privileges while raising the level of violence. The Afghan government and the Afghan Taliban also want to show them powerful and gain more privileges while raising the level of violence. But the Afghan Taliban wants to get privileges and two kinds of privileges, one is that American forces leave Afghanistan, and take the privilege of winning the war, the other is to insist on denying the Afghan government, and not negotiating with the Afghan government, So that the weak system at the level of the country will be eradicated and the Taliban’s preferred Islamic Emirate will be created instead. Therefore, he is currently pushing for war. On the other hand, the Afghan government, which prioritizes elections over peace, considers the emergence of a short-term government against a five-year achievement and an existing system. He stressed more than ever before on the air and air operations, which caused more fatalities than the Taliban in Maidan Wardak, Logar and some other parts of the country. The recent expansion by the Afghan government may be due to its ability to show itself powerful and gain the privilege of having face-to-face talks with the Afghan Taliban and expanding power. As the war between the two sides continued to intensify amid the demands made by both sides, most of the victims of the war along with both sides were civilians. Another reason for the increase in civilian casualties is foreign-backed family groups in the country who are not sharing their interests in the war and when hopes are raised about peace, they want to increase their attacks on civilians to bring peace. Constraints about the conflict and the fighting continued, as a week ago, a civilian passenger bus was struck in Farah province where all the victims were civilians and no armed groups were blamed, and all the victims were civilians. Another major fear is the major obstacle to peace and the cause of the increase in civilian casualties, ISIS is an armed group that often conducts attacks against civilians. Also, presidential election campaigns in the country, where civilians are involved, and the recent attacks on election campaigns by the Taliban and severe threats to civilians have also increased the civilian casualties significantly.

As the war on peace continues to intensify, Afghan leaders must step into a third phase between the Afghan government and the Afghan Taliban, rather than foreign countries, to prevent future Afghan peace and kill Afghans. This is because in Karate Kraut it has been seen that foreign countries do not value Afghan peace against their national interests, and even many countries do not do real cooperation in Afghan peace unless their internal problems are solved. This means, again, disrupting the Afghan peace process and, when their problems are not resolved, they not only withdraw from the Third Amendment, but also deal with insidious and irresponsible threats to Afghan peace, and openly. Afghans create obstacles to peace. They play their part in strengthening armed groups whose benefits are sustained during the violence, and they get their benefits simply by killing and injuring civilians. The Taliban and the Afghan government should make peace through face-to-face negotiations, and shorten the hands of other countries. Peace and negotiation mean giving and accepting each other, so both sides of the war (the Taliban and the Afghan government) should consider this principle not only to end civilian casualties, but to work together. Acknowledge the presence of one another at home, so that the tired Afghan nation of decades of war will witness the peace of every nation, just like any other nation.