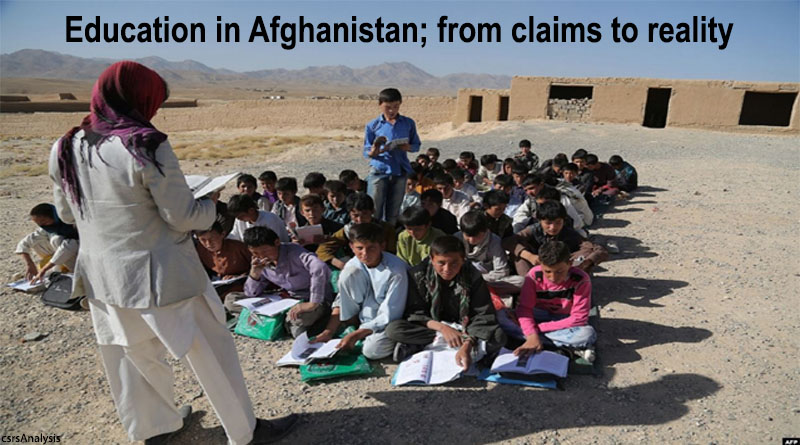 Afghanistan’s education has been slightly upward since the new system was established in 2001. Attendance rates in schools and in schools have increased, but there are still many challenges and challenges such as insecurity, poor quality, corruption in education and other problems that threaten this vital area.

After the collapse of the Taliban regime following the US attack on Afghanistan in 2001 and with the formation of the new government in Afghanistan, education was one of the sectors which have had remarkable developments.

In the past years, Although Afghan education has grown dramatically during this time, thousands of schools have been created and hundreds of thousands of students have been educated in these schools. In addition to this growth, according to the Afghan Ministry of Education, about 3.7 million eligible children are now deprived of school. In addition, the education sector in Afghanistan faces many challenges and challenges at the head of war, insecurity and corruption. Lack of professional teachers and staff, lack of buildings, lack of books and other materials, lack of exams, obstructed schools, curriculum problems, poor administration, and so on are some of the problems in education in Afghanistan.

President Ghani during the electoral campaigns, and when he arrived in the Presidential Office, he once again committed to the implementation of his slogans at a ceremony commemorating the Teacher’s Day (October 10, 2014).

President Ghani pledged to work toward improvement the knowledge level of the teachers of the country and in order to increase the quality of education, more will be invested on teachers, so that our graduates from the 6th, 9th and 12th grades will also be able to have a proud job and dignified life. He also promised to eliminate the distance between school and madrasa and pay more attention to religious teachings. According to the president’s commitments, in a period of six months, a land will be distributed to all teachers in their respective provinces, and also addressed the teachers and said; “to the extent you fight corruption and the government’s revenues get increased, then, the amount of your salary will become increased as well.”

At the beginning of the operation of the National Unity Government, however, the commitments made by President Ghani brought hope and optimism regarding improvements in the educational situation, but over a period of more than a year since the reign of National Unity Government, President Ghani apologized the teachers for failing to fulfill his obligations, and once again at the ceremony of the beginning of the school year of 2015, he pledged that education will be at the top of his government agenda.

President Ghani, at the ceremony of the beginning of the school year of 2017, promised that 6000 new school-buildings will be built up to next two year. He also stressed to connect the Capital and provincial schools through internet and reemphasized on fulfilling his promises regarding increase in teachers’ salaries till 18th of August, 2018. However, months have been passed from the recent commitments made by the President, but the education is in the same situation and there is no sign of the implementation of Mr. Ghani’s commitments. In this perspective, the recent joint report of UNICEF and the Afghan Ministry of Education is a good illustration of the country’s unsavory educational situation. But at the start of 2019, he said, “It is not easy to provide funding and facilities for 6,000 schools, but essential steps have been taken and it is now fully realized.” The president cited unexpected challenges in the coordination sector as a result of his failure to fulfill his promises in the field of education, saying: “Work is underway on 1,200 schools and funding will be provided for the construction of 2,700 schools this year.” Six months have passed since President Ghani’s recent pledges, but the education remains in place and there is no indication that Ghani’s commitments have been fulfilled. In this regard, a recent joint report by UNICEF and the Afghan Ministry of Education is a good reason for the poor educational situation in the country.

Besides constant promises and undertakings of the government for improvement of education, the sector still faces plenty of challenges which threaten the progress. Out of 14,000 schools, 7,000 schools across Afghanistan are still did not have building, with pupils studying under tents and even in open spaces, The Ministry of Education builds about 1,000 new schools annually, which is very low compared to 7,000 unrepaired schools, as new schools are becoming more and more urgent every year. The following are some of the challenges:

Insecurity: War and insecurity are challenges that the education and other sectors are facing. According to UNAMA, 2018 was the bloodiest year for the people of Afghanistan in which 10 thousand people got killed and wounded.  Moreover, based on information ministry of education, around 400 schools have been closed due to insecurity.

Corruption: Corruption is another obstacle for education in Afghanistan. The anti-corruption joint independent committee at the beginning of new school year announced that there are still many glitches in education sector. It will have severe effects if actions are not taken. The committee in 2018 warned that the widespread corruption in education is alarming. The report published by the committee stated that the issues of corruption in teacher hiring process, selling school books in market and problems in salary distribution of teachers have had negative effects on the education of the country.

Poor quality: After insecurity and corruption, quality and poor standards of education in another key challenge facing the sector. According to the statistics of ministry of education, 27% of 70000 teachers, minimum requirement for hiring a teacher is baccalaureate certificate which along with other reasons is a cause of poor quality. In addition, the sector lacks around 90 million books and 70 thousand teachers, based on reports of ministry of education.

Weak management: Absence of executive capabilities in the capital and provinces is another obstacle for the sector. Due to lack of potential and experts, recruitment of unprofessional individuals and presence of corruption, the sector faces the challenge of administration.  Therefore, the sector firstly needs reformation in management system and secondly requires a comprehensive, systematized and national strategy to resolve the current problems of the sector.