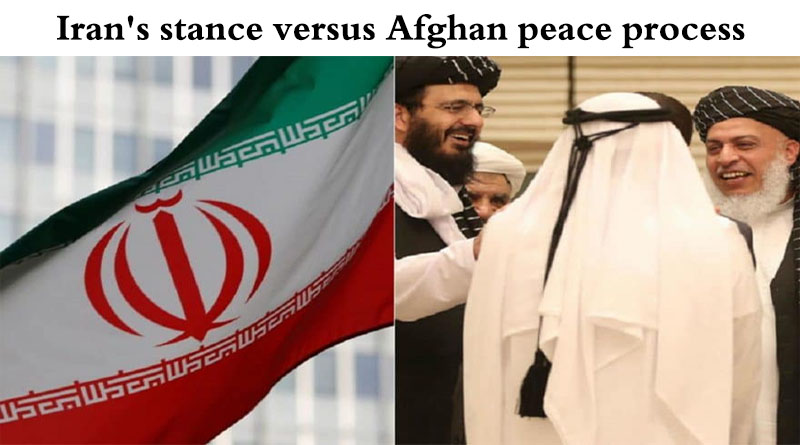 Iranian Foreign Minister Mohammad Javad Zarif, while addressing parliament members in Tehran on Sunday, said “we do not accept a peace in the foreigners’ favor in Afghanistan,” and will not subscribe. However, on September 8, this year, after the clashes between the Taliban and the Americans, Javad Zarif wrote on his Twitter account, “I am deeply concerned about Afghanistan: failed foreigners must leave and fratricide must be stopped, especially as foreigners can exploit this situation and launch new bloodshed” He added that Iran was ready to do its best to bring lasting peace to Afghanistan, Following on September 17, the Taliban’s four-member delegation led by Abdul Salam Hanafi, a deputy of the Taliban’s Political office in Qatar, traveled to Tehran and had meetings with senior Iranian officials. This analysis is about the evaluation of Iran’s position on Afghan peace process in the light of strained relations with the Taliban and the United States.

Iran’s convulsive relations with US and Taliban

The history of Iran’s strained relations with the US dates back to 1979-1981, when a group of young men stormed the US embassy and some Americans were Hostage. This act Absolute interruption Iran’s diplomatic relations with the United States, In the years after 9/11, Iran’s nuclear program was a point of contention with the United States and its allies, which continues to this day. Despite the seizure in Iran-US relations, opportunities have arisen, albeit rare, to foster US-Iran cooperation. One of these opportunities was a US attack on Afghanistan, Iran’s relations with the Taliban have not been very welcoming since the establishment of the Islamic Emirate in Afghanistan, Iran views Taliban as Sunni extremist group that will not align with Shia Iran, But coldness of ties peaked when nine Iranian diplomats killed by Taliban in Balkh province, After the event, Iran did not hesitate to contribute to the North’s resistance to the Taliban. Due to broken ties with Taliban, 9/11 attacks on Afghanistan and overthrow of Taliban regime approved by Iranian government, in addition to welcoming the overthrow of the Taliban regime, Iran sought to create a climate of trust with the United States and open new fields of cooperation between the two countries through intelligence cooperation Anti-Taliban.

Alter the outlook or force of unpleasant season

Iran’s efforts to establish cooperation chains with the US It didn’t work out, Especially when the debate over Iran’s nuclear program became controversial and Iran faced severe economic sanctions, This has led Iran to seek more influence in the countries of the region by relying on military and intelligence solutions And find new allies, Establishment of ISIL in Iraq, Syria prompts Iran to seek faster allies in search of new allies and. ISIL soon established the Khorasan branch in Afghanistan, This group is generally composed of young people who regard themselves as Salafi And this spectrum of youth can pose a strategic threat to Shia Iran on its eastern borders, Iran Concerned If war Continues That Same, Soon ISIL Becomes Stronger Force on Afghan soil. In this way, the Taliban, who have been opposed to ISIL since its inception; have become a good candidate for Iranian friendship. According to published reports, intelligence cooperation with Taliban over 2014 years, But Iran was hiding its relations with the Taliban until peace talks began, but after the peace talks Taliban-Iran talks began, both revealed diplomatic ties with each other. Taliban wanting to gain more points at US-led table talks see public relations with Iran as better position, Similarly, Iran, which has strained relations with the United States, has sought to make the United States understand that it has influence over and can use it against US interests by publicizing its ties with the Taliban and accepting delegations into its territory. As such, Iran’s relations with the Taliban have emerged from the shadow of a tense shadow and established by new realities and coercion.

Worry about the future

Selection of Taliban as a small threat with the comparison of a big threat (ISIS) is not the only reason for changing the Iranian view of the Taliban. Both Iran and Taliban agree on Americans leaving Afghanistan and establishing a new government in Kabul, but what about a government? This is something Iran is worried about; Iran’s concern with the Taliban’s religious thinking is still in place, Iran has made clear in secret talks with the United States that after talks with the Taliban, it has come to the conclusion that the Taliban are no less satisfied than the Islamic Emirate’s complete turnaround, In a speech in India, Mohammad Javad Zarif has said that a peaceful future in Afghanistan would not be possible without Taliban involvement, But the Taliban should not be the absolute ruler and take control of everything, In short, Iran wants the Taliban’s share in the future government, but in no way wants to do so at the expense of all the Taliban’s centralization of powers, To this end, Iran’s emphasis on peace talks among all aspects of the Afghan government is central to the Afghan government.
Relations with Taliban and its impact on the peace process
Although it is not clear that Iran is true about its assertion that the Taliban insist on the full return of the Islamic Emirate, it is clear that Iran is using its relations with the Taliban to create a second Shi’ite channel with the United States and to warn ISIL and their supporters. Iran, by displaying its relations with the Taliban, wants on one hand to support ISIL in Afghanistan, to support the Taliban, who are fierce opposition to ISIS, and on the other hand to let the US know that it has good relations with the group and can Brings them to the negotiating table and avoids stressing unacceptable demands for America, It is not clear how far Iran’s influence over the Taliban is. The United States does not accept that it can play a role in negotiating the Taliban with Iran or have common goals with the United States. That is why Zalmai Khalilzad, even among the countries in the region, has made no mention of Iran’s participation in the peace talks. What would happen if Iran were to leave the peace process alone? The right answer to this question may come when the extent of Iran-Taliban relations and how Iran’s influence on the leadership of this group is known, what is clear is that Iran wants to contribute to the peace of Afghanistan if it has not benefited from the war.

Iran is afraid of an Afghanistan that is a growing field of ISIS movements, so he has to choose between two dangers, one that can be controlled as a close friend, Taliban can play the role, with hostility to America, hostility to ISIL and unpleasant relations with Saudi Arabia. But Iran does not want the Taliban to win the battle, that’s why Iranian diplomacy has always emphasized the involvement of all sides in the peace process. If US peace talks with Taliban fail to align with Iran’s goals, Iran will openly pursue this process. But how effective the effort to segregate the peace process depends on a number of factors, including how Iran is influencing the Taliban and how much they work with them. However, there are claims of Iranian support for the Taliban, But given the Taliban’s internal mix and hostile history between the two sides, it is difficult to trust these claims.