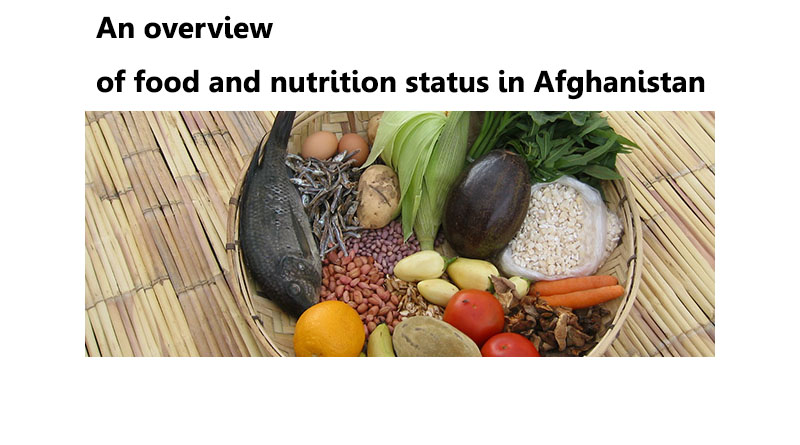 Access to adequate and healthy food is essential for every human being from birth to death, and its growth and strength are closely linked to food. Article 25 of the Universal Declaration of Human Rights affirms the right of everyone to access to healthy nutrition, with physical capacity and access to places of supply. Unfortunately, Afghanistan is one of the countries that are not up to this level. In this article we will look at the nutritional and food situation in Afghanistan, with a brief overview of some of the statistics and facts. What are the problems against them and what is the solution to these problems? These are the topics we have discussed here.

According to several studies and surveys, the rate of poverty has increased in the Government of National Unity, where poverty now stands at 54% of the total population, meaning that about 54 people out of every 100 people earn less than one dollar a day. As noted, food security in the country has weakened with the arrival of the Government of National Unity, and 45% of the population is unable to meet their food needs.

According to the national statistics published in 2013, 40.9% of children aged 0-59 months suffer from under-development and malnutrition, an untreated disease. If the child does not reach 80 cm at the age of two years, it is considered malnourished, and cannot be treated and then will arise short, and this situation occurs when the mother does not breastfeed her baby from birth until the age of two enough, where it is necessary for each mother to breastfeed her child for six Months, then add some other nutrients he needs.

According to the survey, 9.5% of children suffer from poor muscle growth due to inadequate nutrition, and 25% of children were found to be underweight. Girls aged 10-19 were assessed for the first time, with 8% being thin, 11.6% being overweight and only 2.7% obese. Among women of gestational age (15-49 years), 9.2% are thin or malnourished.

The 2013 national food statistics report that the proportion of essential nutrients in Afghanistan is low compared to other countries, which is an important challenge. Anemia (low hemoglobin> 11.99 g / dcl) is present in women of childbearing age (40.4%) due to iron deficiency. It causes many problems such as fatigue and fatigue. Also, 45% of children have anemia. Families that their children are appetite less.

Food security is a key priority

Food security is a situation where the entire population in the country has access to healthy, adequate and clean food throughout and at all seasons with the material capacity to buy and the ability to use it to obtain the necessary energy. Food security has four pillars:

1: Every citizen should have access to food in all seasons. If war breaks out in an area, roads are blocked or the market is destroyed, food security is also lacking.

2: If there are no barriers such as war or road blockage, but the necessary foodstuffs are not available in the market or the market does not exist at all, then food security is also imbalanced.

3: If there are no barriers to access to the market and the availability of various foodstuffs in the market, but the physical condition of the people do not allow them to get the necessary supply, food security is also disturbed.

4: If all of these reasons exist and the population has purchasing power, but the food is not sterilized or the population lacks health systems and services and do not have the basic awareness of healthy nutrition, food security is also imbalanced.

A: Agricultural development and facilitation for the owners of factories and traders of agricultural crops with paving ways to raise the level of national production so that the level of income of the population and have access to basic foodstuffs.

B: Establishing programs and plans and mechanisms for long-term development of the agricultural sector and its application and the development of modern methods of agriculture (using machinery and machinery), and provide special places for grazing to develop the livestock sector, which is followed by the improvement of the quality of animal crops.

C: Helping farmers to get their crops to market in a timely manner as the government develops paved roads connecting agricultural land and commercial centers.

E: A budget should also be allocated for child malnutrition prevention programs, so that people are adequately aware of the necessary nutrition for children, and are guided by the food available in the country that substitutes for the importation of expensive medicines to treat malnutrition, which is replaced by local food and legumes. And carbohydrates to prevent malnutrition, with the advice of nutritionists.

F: A department should be established to control the quality of food and ensure that it is healthy so that all segments of the population trust the safety of food and compliance with health standards.

G: Scholar and preachers have to show the importance of nutrition from the perspective of Islam, while combating some of the false information that is widespread. They must raise awareness of the importance of feeding children in the first thousand days of their lives in order to grow up healthy and strong.