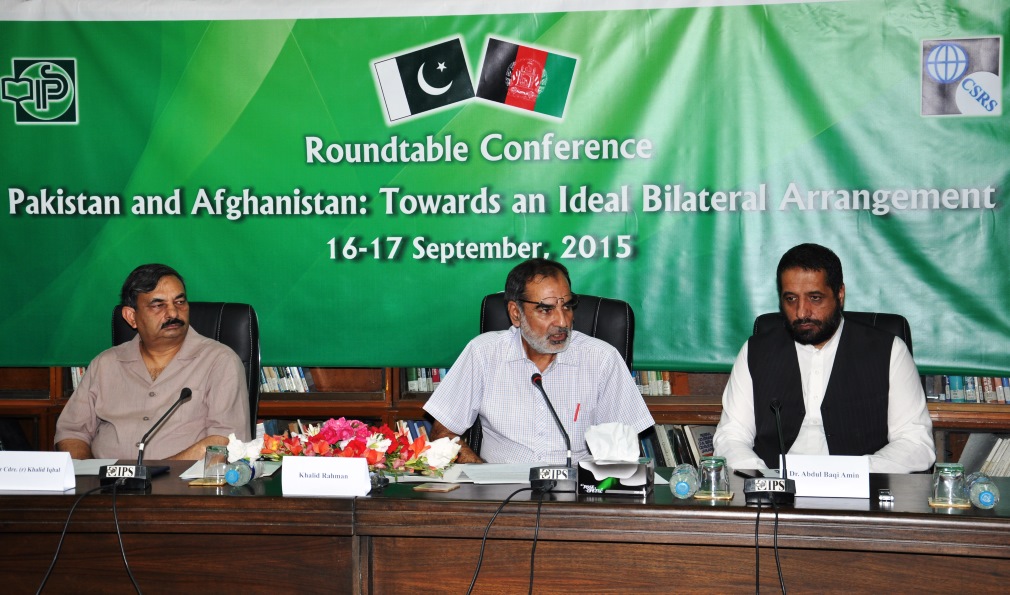 The conference titled “Pakistan and Afghanistan: Towards an Ideal Bilateral Arrangement,” jointly organized by Centre for Strategic and Regional Studies (CSRS), Kabul and Institute of Policy Studies (IPS), Islamabad successfully conducted in Islamabad on 16-17 September.

Before the conference started, the delegation from CSRS and officials from IPS held a joint meeting and discussed about the joint cooperation and the upcoming programs.

Conference had four sessions; the first session was titled “Afghanistan-Pakistan Relations; Current Scenario and Future Perspective” in which Dr. Fazal Hadi Wazin mentioned the problems and opportunities between both countries and called for that they should be discussed and addressed. The other presenter of this session was former Pakistani Ambassador to Afghanistan, Ayaz Wazir who mentioned the existed obstacles and opportunities toward the relations of both countries.

The second session was titled “Afghanistan’s Peace Deadlock and Solutions” in which Dr. Abdul Baqi Amin and Rustam Shah Mohmand presented their academic articles and considered inter-Afghan understanding in the Afghan peace process as “important” and emphasized that main reason behind failure of the peace process is lack of a third party which would be accepted to the entire sides of the war.

The third session was titled as “Afghan Refugees in Pakistan; Current Scenario and Future Perspectives” in which Dr. Wahidullah Muslih spoke about the situation of Afghan refugees in Pakistan and said that the issue of refugees and displaced persons should be approached as a long-standing linkage between the two societies; and a conducive environment needs to be created for a smooth, mutually agreeable, lasting solution which, above all, is respectable for refugees and displaced persons themselves.

The fourth session was titled as “Afghanistan-Pakistan Economic relations; Challenges and Opportunities” in which Eng. Hamid Durrani and Dr. Anwar Shah, university professor, presented their academic articles and focused on strengthening economic ties between both countries.

At the end of every session, the participants warmly welcomed the discussion and raised their questions with the speakers and shared their views on related issues.

Speakers from the both sides insisted that the policymakers, both in Kabul and Islamabad, must not waste further time and immediately initiate comprehensive dialogues and take confidence building measures to lay the ground for strong and everlasting relations between Afghanistan and Pakistan and counter the nefarious designs of the international and regional players who are bent upon creating differences between the two brotherly nations trying to derail every single effort to bring sustainable peace and stability in the region

The conference called on following:

Besides that, the negative role of a segment of policymakers, media and intelligentsia in the two countries was also criticized as major cause of hatred between Afghan and Pakistani nations and promoting vested interests of foreign powers in the region.

Both the sides emphasized that the civil society, research centers and think-tanks in particular can play a vital role in promoting relations between the two countries. They can influence the policymakers and stakeholders; therefore such institutions should come forward actively, and collaboration between them should be strengthened for mutual understanding.

This two-day roundtable was carrying the message of that common faith, history, culture, languages and interlinked socio-economic realities and opportunities provide the basis and way forward for both Afghanistan and Pakistan to ensure peace and build their bright future together.