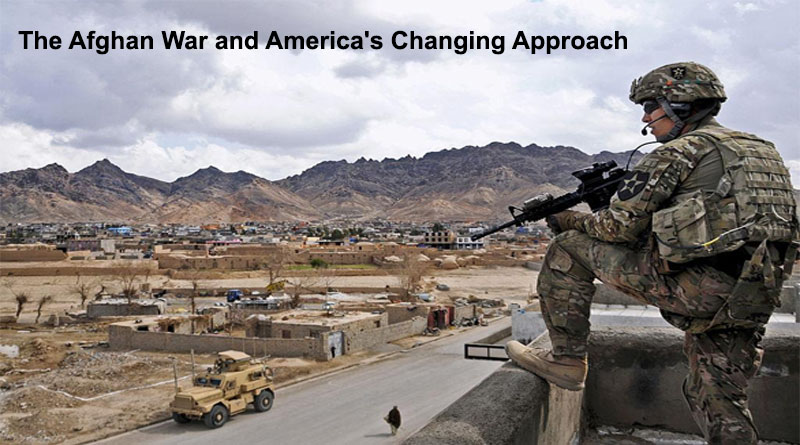 Inside America’s views on the Afghan war are becoming more negative, with the American media at the end, when peace talks on the one hand are entering a more sensitive stage than the other, side in Afghanistan. The United States is spreading demand for defeats, high costs, fatalities and endless wars, Last week, the Washington Post published a report that the White House had again told lied its nation about the Afghan war, and also received 2,000 pages of documents in this regard, which US officials say is more relevant to Afghanistan. Under pressure, In the past eighteen years, this war has gotten the lives of tens of thousands Afghans and is still continuing to cost lives. The Taliban’s defeat in 2001 was a temporarily downfall and the Taliban are now stronger than the past. Insecurity has extended from southern Afghanistan to the north and the Afghan government does not have control over a great part of its territory. What was the US attack on Afghanistan and the consequences of that attack? The report, published by the Washington Post and a look at America’s changing approach.

Background of the U.S. Attack on Afghanistan

Whenthe Soviet Union invaded Afghanistan the relations between U.S and Afghan Nation became closer to each other due to their common enemy, Soviet Union and Communism, and thusthe U.S. was helping the Jihadi movements against in Afghanistan against the Soviet Union. But, After Soviet withdrawal from Afghanistan the U.S. left alone Afghanistan and paid her attentions to the Western Europe, where not only the Berlin Wall was demolished, butalso many other countriesgot independence with the dissolution of the Soviet Union.On the other hand, after the Soviet withdrawal from Afghanistan civil war broke out in Afghanistan, and after three years of civilian war caused the Taliban movement rise to power from Kandahar. Some Arabs, including Osama Bin Laden and some of his other friends, resided in Afghanistan, who had gained shelter in Afghanistan in Professor Burhanuddin Rabbani’s government, before the establishment of the Taliban.In 1998 there were conflicts between the Taliban and the U.S. and then between the Taliban and the Saudi Arabia on the issue ofOsama Bin Laden, because of which the U.S. fired missiles on Afghanistan many times; but with the incidence of 9/11, the Afghan-U.S. conflict reached its peak because of Osama, and because of which the U.S. attacked Afghanistan. As 9/11 happened in the U.S., the president of the U.S. George W. Bush and the U.S. started attacks on Afghanistan.

The US ousted the Taliban, but the US began a long war in Afghanistan. The war in Afghanistan is the longest war in US history, foreign forces from 2001 to 2004, compared to the years after that, the coalition forces had fewer casualties but after that their fatalities increased. In 2004, 60 soldiers of coalition forces died but in 2005, 2006, 2007 and 2008 this number respectively rose to 129, 193,228 and 296 and reached to 516 in 2009. 2010 was the bloodiest year for foreign troops in Afghanistan because in this year their fatalities reached its heights. The overall fatality of foreign troops in the country till 2019 was more than 3500 soldiers.    The Afghan forces, the Afghan forces also had casualties every year after their formation in 2002. In 2007, 2008 and 2009 respectively 966, 983 and 931 Afghan soldiers were killed. In 2010, when the war was unprecedentedly intensified, 2113 Afghan soldiers were killed. Although the number of Afghan soldiers’ death decreased in 2011 and reached to 1080 but in the years after 2011, this number was increasing. In 2011, security responsibilities were transited to Afghan soldiers and, thus, after 2011, the fatalities of the Afghan force increased. In 2012 and 2013 the fatalities of Afghan forces was respectively 2765a and 4350. But during national unity government (2014-2018) approximately 45000 Afghan soldiers were killed. Civilian casualties in 2001, when the US and coalition forces began their attacks on Afghanistan, the number of civilian casualties were very high (2375 civilians were killed in this year). Later from 2002 to 2006, overall 2422 civilian were killed in Afghanistan. UNAMA began documenting civilian casualties in 2007 but, in its statistics, UNAMA has not included those incidents of civilian casualties which were not verified or were out of the reach of UNAMA; nor did it include the casualties caused by drone attacks and the foreign forces. But still, according to the statistics of the UN, from 2007 to 2018, the total number of civilian casualties was 62375.

A Short Review of report published by Washington Post

confidential documents obtained by The Washington Post reveal that top US officials misled the American public about the war in Afghanistan in order to conceal doubts about the likelihood that the US could be successful in the nearly 20-year effort since its earliest days, the paper reported in a major investigation on Monday,The Post said it obtained the more than 2,000 pages of documents, The paper said the interviews “bring into sharp relief the core failings of the war that persist to this day” as “U.S. officials acknowledged that their war fighting strategies were fatally flawed and that Washington wasted enormous sums of money trying to remake Afghanistan into a modern nation, “Several of those interviewed described explicit and sustained efforts by the U.S. government to deliberately mislead the public,” the Post reported. “They said it was common at military headquarters in Kabul — and at the White House — to distort statistics to make it appear the United States was winning the war when that was not the case.” Defense Department “officials have consistently briefed the progress and challenges associated with our efforts in Afghanistan, and (the department) provides regular reports to Congress that highlight these challenges,” Campbell continued. In one such case, the Post said Douglas Lute, “a three-star Army general who served as the White House’s Afghan war czar” under former Presidents George W. Bush and Barack Obama, told interviewers “we were devoid of a fundamental understanding of Afghanistan — we didn’t know what we were doing.” “What are we trying to do here? We didn’t have the foggiest notion of what we were undertaking,” Lute said in 2015, according to the Post, In another example, Jeffrey Eggers, a retired Navy SEAL and White House staffer for Bush and Obama, bemoaned the cost of the war to interviewers, asking, “What did we get for this $1 trillion effort? Was it worth $1 trillion?” the Post said, After the killing of Osama bin Laden, I said that Osama was probably laughing in his watery grave considering how much we have spent on Afghanistan,” the former SEAL said, according to the paper, The Post said that in one of Rumsfeld’s memos, the former Pentagon chief wrote: “I may be impatient. In fact I know I’m a bit impatient … We are never going to get the U.S. military out of Afghanistan unless we take care to see that there is something going on that will provide the stability that will be necessary for us to leave,” In comparing the new documents to the Pentagon Papers, the Post said that “throughout the Afghan war, documents show that U.S. military officials have resorted to an old tactic from Vietnam — manipulating public opinion.” For example, the interviews “contain numerous admissions that the government routinely touted statistics that officials knew were distorted, spurious or downright false,” the Post said. One individual identified as a senior National Security Council official said, according to the paper, that “even when casualty counts and other figures looked bad … the White House and Pentagon would spin them to the point of absurdity.” Michael Flynn, the retired three-star Army general who briefly served as Trump’s national security adviser, also provided candid thoughts on the war effort to interviewers, questioning in 2015 why officials were touting it as successful, according to the Post. They also failed to prevent corruption in Afghanistan, to properly train and manage the Afghan security forces and to eliminate drug trafficking. The documents say that American military and political officials have lied to their people about the situation in Afghanistan and have tried to cover up their shortcomings and failures, and claim victory.

The actions and expressions of US officials, however, seem to have come to the conclusion that they are losing ground on the battlefield in pursuit of their goals; they are afraid to repeat the experience of the former Soviet Union. If not, it comes to the conclusion that he wants to change his approach deeply, changing his approach in Afghanistan through reconciliation with the Taliban, withdrawing or reducing its forces and other changes. How that changes will be and how America will protect its interests is a separate debate, but it is important for Afghans to change this approach to a change that will last four decades of war. You are to be put to an end and take peace instead. The first thing to do is to end hostility, hatred and war with the Afghans, in every name. Those who have been in hostility with their people in friendship with America for the past eighteen years should end this situation further. The United States is using every possible means to reach an agreement with the Taliban. If the path is taken, then all stakeholders (Taliban, government and political party) are responsible to their God and Nation for initiating and succeeding interfaith dialogue. The 40-year-old war that has been inflicted on the Afghans has made the most of their land, taking advantage of this opportunity, as it did for the Russians in the 20th century and the Americans in the 21st century. Teaching historical in the field this time in the field of politics also proved that Afghans can make history in politics too.