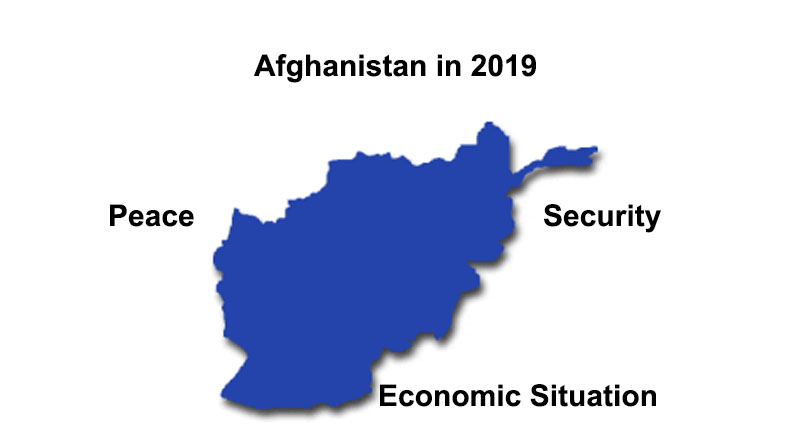 The year 2019 began with hopes for peace in war-torn Afghanistan, the first time since the 18-year conflict in the South Asian country started following an invasion by the United States. Expectations of a peace agreement between the US and the Taliban were high after the two sides agreed in principle to its framework. The peace process with the armed oppositions, through its various stages, was accompanied with hopes and disappointments. The first meeting of direct negotiation between the Taliban and the US delegation was held in “Doha”, It has reappeared more than 10 times, and may be resumed shortly after the 11th round, Beside the bad security situation and the deadlock of peace talks in this year, the National Unity Government (NUG) faced domestic problems and disputes and still the heads of NUG, Presidential elections were delayed several times during the same year, based on the preliminary results of the state -builder team that won the election, which other candidates do not admit. [1]

In this part of the Weekly analysis you would read about the peace talks, security and economic situation of the Afghanistan in 2019.

For the first time since the beginning of the 18-year war in Afghanistan, The year 2019 began with hopes for peace in war-torn Afghanistan, the first time since the 18-year conflict in the South Asian country started following an invasion by the United States. In January, expectations of a peace agreement between the US and the Taliban were high after the two sides agreed in principle to its framework. The deal stated that the Taliban will not allow foreign armed groups and fighters to use Afghanistan as a launch pad to conduct attacks outside the country, a complete withdrawal of US and NATO forces, an intra-Afghan dialogue, and a permanent ceasefire between the US and the Taliban.  Peace and reconciliation. Some 64.0% of those surveyed say reconciliation with the Taliban is possible, Afghan support for efforts to negotiate peace with the Taliban. This year, the proportion of people who strongly or somewhat support these efforts stands at 89%. A national sample of 17,812 Afghan respondents aged 18 years and above were surveyed face-to-face across all 34 provinces from July 11 to August 7, 2019.  That survey deep political divisions, structural governance challenges, and economic insecurity continue to impede a durable peace and development progress in Afghanistan, US-Taliban meetings in Qatar’s capital Doha continued for the next few months against the backdrop of continuing attacks by the armed group across Afghanistan and US-led air attacks. In another significant move towards peace, Doha, in July, hosted a two-day intra-Afghan meeting between Taliban and Afghan officials. A call to reduce civilian’s casualties to “zero” was made at the meeting even as the death toll continued to rise.  In September, just as the US-Taliban talks were believed to have reached the final stage, US President Donald Trump abruptly announced the deal was “dead”, citing an increase in violence in which a US soldier was killed. The Taliban and other country said the announcement came as a “shock”. Trump made a surprise visit to the US troops in Afghanistan and declared that the peace talks with the Taliban had been resumed. The November 28 announcement came a week after two Western hostages were swapped for three Taliban commanders, an exchange partially brokered by the US. On December 4, US special envoy for peace, Zalmay Khalilzad, arrived in Kabul, three days before he met a Taliban delegation in Doha for a fresh round of talks. The renewed Doha talks focused on steps that could lead to a ceasefire that would end the 18-year conflict. “The US rejoined talks today in Doha. The focus of discussion will be reduction of violence that leads to intra-Afghan negotiations and a ceasefire,” a US State Department spokesperson said on December 7. The Taliban has so far refused to engage with the Afghan government, calling it a “US puppet”. On December 11, the armed group launched a suicide attack outside a hospital near the Bagram military base in Parwan province, north of the capital Kabul, killing two civilians. Khalilzad expressed “outrage” over the attack and said the Doha talks would resume after the Taliban “consult their leadership” on continuing violence. Taliban political deputy travels to Pakistan to consult with TTP members, and US State Department says talks with Taliban resume in Qatar next week. [2]

The security situation has worsened in 2019 compared to 2018. Earlier this year, deadly attacks and explosions took place in the capital and other major cities in the country, such as the attack on the Green Village, the wedding ceremony at a hotel in Dubai, Kabul, a powerful blast in the green area of Kabul, a mosque in Nangarhar province. The attack on Afghan military bases in Arghistan district of Kandahar, the attack on the campaigning of the state builder team in Parwan and so on.Since the beginning of 2019, more districts have fallen into the hands of the Taliban, including Yengi Qala, darqad and Khawaja ghar in Takhar province, Arghangkhwa in Badakhshan province, Koghan and Ghoghul district of Faryab province, anar dara of Farah province, dashti archi, Chahar Dara, Imam Sahib and attack on Kunduz center, Dahaneh Ghoree, guzargah Noor and central Baghlan, Maivand of Kandahar, Marja of Helmand, Gharabagh, Jaghto, Rashidan and Khawjah Omar in Ghazni province have been mentioned, and some have fallen several times. It has been or has been held by the Taliban for several hours. Increasing foreign air strikes during the year that have killed civilians is another challenge. Foreign forces targeted civilians and even Afghan troops in several air strikes this year. The number of Afghans who say that a group poses a threat to the security of their local area (36.4%) is almost identical to 2018 (35.8%). In an open-ended follow-up asking which group poses a threat, the Taliban continue to be the top response, at 68.9%. The Taliban and US force are seen as more of a threat in rural areas (76%) than urban (37.2%). A 50% increase is noted, however, in those who cite criminals/thieves as a threat to the local area, from 24.9% in 2018 to 37.6% in 2019. [3]In the first six months of 2019, the armed conflict continued to inflict significant harm on the civilian population, killing and maiming thousands, displacing families from their homes, and impacting essential services including education and health care. From 1 January to 30 June 2019, UNAMA documented 3,812 civilian casualties (1,366 deaths and 2,446 injured), a 27 per cent decrease from the same period in 2018 and the lowest total of civilian casualties for the first six months of the year since 2012. While the number of injured civilians in the second quarter is comparable to the first quarter of 2019, UNAMA documented a 27 per cent increase in civilian deaths from the first to second quarter in 2019. Trends documented in the first quarter of 2019 continued. Antigovernment Elements continued to cause the majority of civilian casualties. Civilian deaths (not total casualties) attributed

Economy Growth: Based on ADB’s forecast, the growth 2019 2.5% but with risks clearly on the downside. Both Iran and Pakistan, Afghanistan’s main trading partners, are expected to experience slower growth in 2020, and business investors are likely to stay on the sidelines before Afghanistan’s presidential election expected in April next year. In an update of its flagship annual economic publication, Asian Development Outlook (ADO) 2019, ADB revised downward its forecast for Afghanistan’s gross domestic product (GDP) growth rate in 2018 to 2.2%, a slight decrease from the previously forecasted 2.5%, as political uncertainty before presidential elections, worsening security, and a decrease in crop production due to the worst drought in decades show signs of limiting economic growth Exports reportedly increased in the first half of the year, benefiting from expanded air connections with India for high-value goods such as fruit. Nevertheless, the current account surplus is forecast to narrow in 2018 because imports, which are 10 times exports, will grow faster than expected partly to bring in more food. Security and the political situation remain concerns in Afghanistan’s economic outlook. Security is unstable, as large attacks by the Taliban and the Islamic State in August and September seemed to counter earlier indications of progress in negotiating a peace settlement. Parliamentary elections are scheduled for October 2018 and a presidential election in 2019, which could cause businesses to adopt a wait-and-see approach. Afghanistan’s economy in 2018 is now projected to grow slower than the previous forecast due to the challenging security and political situations in the country and the impact of severe drought in the first half of the year, says a new Asian Development Bank, In the long run, the report has suggested investing more in infrastructure development to address the country’s long-term economic growth and thus address the challenges facing Afghanistan’s economic growth. The bank has also encouraged the government to provide sustainable funding. According to estimates of the Asian Development Bank, Afghanistan’s economic infrastructure costs $ 1 billion annually from 2017 to 2021 and needs more access to funds from Afghanistan. [5]

National Income: During 2019, AFN 208 billion was collected, representing a 10 percent increase from the previous year. Revenue for the last fiscal year was 189 billion Afghanis. Revenue of the year (2019) is the peak of revenue growth over the past 18 years, a 110% increase over the past five years. The Treasury chief: “That significant increase in revenue collection in a difficult situation while,

Extensive reforms have been made to the government’s revenue agencies. And the country saw the presidential election. “Afghanistan completed the IMF’s six rounds of assessments in 2019 to complete the fund’s reform indicators, earning $ 44 million in prize money and long-term debt. [6]

Afghanistan’s exports have increased dramatically over the past five years for example: Exports rates from $ 557 million in 2015 have increased to 975 million $ for 2019 year, this shows export rising approximately 58 percent during mentioned years. Ministry of Industry and Commerce sets export targets of $ 1 billion for 2020 and $ 1.5 billion for 2021 and $ 2 billion for its 2022. Similarly, the country’s imports have been conversely decreased, which has dropped from $ 7,864 billion in 2015 to $ 7,407 billion in 2019, representing a 5 percent reduction in imports over the years. The Afghanistan government and the leadership board of the Ministry of Industry and Commerce are determined to reduce the amount of imports and meet export targets with strategic export plans and policies during the 2020-2022 years. [7]

The Asia foundation Survey finds that people remain 72 percent of young people cited unemployment as the major problem, 39 percent had poor access to education, 19 percent had mental health problems, 15 percent had poor economic conditions and nine percent had insecure youths in Afghanistan. On the other hand, nearly 50 percent of those interviewed said their economic situation had deteriorated during 2019.

A SURVEY OF THE AFGHAN PEOPLE AFGHANISTAN IN 2019

A SURVEY OF THE AFGHAN PEOPLE AFGHANISTAN IN 2019

MIDYEAR UPDATE ON THE PROTECTION OF CIVILIANS IN ARMED CONFLICT: