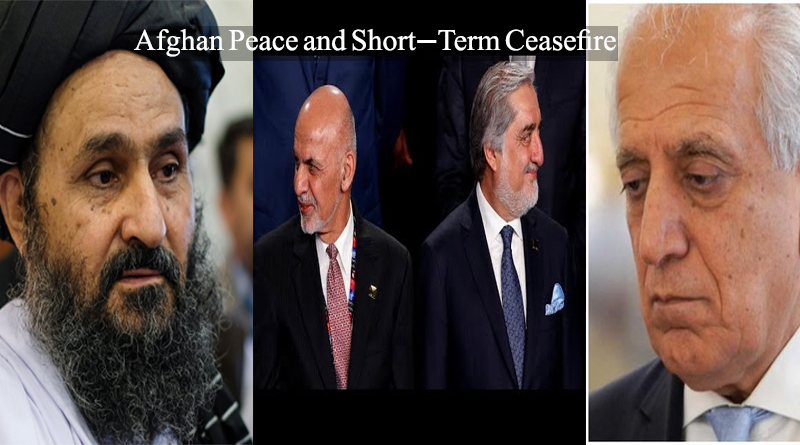 Recently, hopes on Afghan peace emerged after the US and Taliban disseminated reports on signing the agreement, which will put an end to the Afghan war. Subsequently, the final results of Presidential Elections were also announced and Mohammad Ashraf Ghani from the State Builders team became declared as the President. Including former President Hamid Karzai, several Afghan politicians, specifically, Executive Chief Dr. Abdullah Abdullah expressed different reaction regarding the announcements of final results and, thus, developed concerns on future among the people. Despite the concerns, US and Taliban published statements on the subject of commencement of violence reduction week. The impacts of the results of Presidential Elections, and the series of violence reduction week on Afghan peace are analyzed here.

More than ten rounds of talks held between US and Taliban which took over 18 months. Every round was accompanied by the fresh hope of Afghan nation who has been waiting for peace since decades. On September 2019, both sides reported on conclusion of a partial agreement; however, the talks became dead after Taliban launched an attack in Kabul and killed a US trooper there. After a delay of three months, President of the United States, Donald Trump visited Afghanistan and made remarks on revival of talks series with Taliban. The decision was warmly welcomed. [1]

Afterwards, America was trying to make the Taliban to hold talks with Afghan government, but the Taliban were denying the request. At the same time, China invited a meeting between Taliban and Afghan political leaders to talk on peace; however, the Afghan government not only did not participate in the meeting but it also did not allow former President Hamid Karzai and other Afghan leaders to take part in the meeting and the reason was that the Afghan government can represent Afghan nation in abroad not the political figures. [2]

Both Khalilzad-led US delegation and Taliban leaders in Doha were pumping information to the media regarding numerous developments on the peace and the agreement. Eventually, the leading member of the Haqqani Network, Anas Haqqani and two Taliban leaders, who were imprisoned by Afghan government for several years, were exchanged with the two foreigners that were held captive by Taliban. President Ghani said that the intervention can pave the road to peace. [3]

Later, the Afghan government, however, stated the ceasefire as a precondition to talks with Taliban. The decision was considered as a hinder to peace process by former President Karzai and a number of other Afghan leaders.[4]

On January 2020, Pakistani Foreign Minister, Shah Mehmood Quraishi made remarks on acceptance of the demand to reduce violence by the Taliban and he emphasized that it is a good step for peace. Although, US Secretary of State, Mike Pompeo had also called on the Taliban that if they really want to make peace, they should express their will in form of violence reduction. In reaction to that, Taliban said that a lot of demands can create barrier to peace. [5]

Following the Quraishi remarks, the work “Violence Reduction” was widely used instead of “Ceasefire” during US-Taliban talks. It was called an ambiguous plan by Sediq Sediqi, President Ghani’s spokesman, and Second Vice-President of Afghanistan, and they were stressing on ceasefire only.

On February 12, 2010, US President Donald Trump reported that we are close to conclude a deal with Taliban, which once again increased hopes for peace to a larger extent. President Ghani met US Secretary of State, Secretary of Defense, and US Special Envoy Ambassador Zalmay Kahlilzad on the sidelines of the Munich Conference. The American side was constantly talking about violence reduction. On the other hand, NATO Secretary-General talked of re-organizing the NATO troops in Afghanistan if violence was reduced by the Taliban; however, he did not explicitly mention that whether foreign forces will withdraw Afghanistan or not.

Afghanistan Intendent Election Commission (IEC) announced the final results of the controversial elections after a delay of five months, and declared Mohammad Ashraf Ghani as the President of Afghanistan as the winner, having a vote of 50,65 percent. Prior to the announcement of the results, the Stability and Convergence team members had warned about establishing a parallel government in there was any fraud; however, after the results were announced, the leader of mentioned team and leading competitor of Mohammad Ashraf Ghani, Dr. Abdullah Abdullah declared himself as the winner and announced the establishment of an inclusive government. For President Hamid Karzai and a number of other Afghan leaders reacted to the results of the elections and considered them as anti-democratic and a hinder to peace. They expressed that Afghans need peace now not the elections with a very low turnout.

No country except Kuwait, Sri Lanka, Indian leaders and a EU member extended its congratulations to President Ghani after the announcement of the final results. The European Union’s wish to assist and cooperate with the Afghan government in future was faced with harsh reaction of Abdullah Abdullah.

The results of the elections had developed a series of concerns among Afghan people and no one knew that what will happen? Because a Stability and Convergence team member, Rasheed Dostum called on Abdullah Abdullah to appoint his governors in Northern provinces; and, hence, considering the bad situation in Afghanistan today, performing such actions articulates that a risky deal is on the wat and Afghan leaders should be advised that division of political power could intensify the division of people, which the foreigners, especially US officials frequently talk about.

Last Friday, US and Taliban sides made remarks on the commencement of violence reduction week. Taliban group and Afghan government have ordered their forces to do not launch any kind of attack of the enemy and remain in the defensive position. Meanwhile, the Taliban have also allowed the telecommunication companies to operation day and night (24 hours)

Nonetheless, the Afghan government stated that it will be in a defensive mood against Taliban but it will continue its raids against ISIS and other foreign terrorist groups. The announcement of long awaited Violence Reduction Week from one side and continuation of attacks under the banner of fight against foreign terrorists, which is not considered as a serious threat to Afghanistan nowadays, can face the next phases of peace with barriers. Because there are a number of circles in Afghanistan and abroad that have interests in war, and thus, they will make effort to sabotage the series of peace which could increase lack of confidence among the relevant parties.

On the other hand, US Secretary of State, Mike Pompeo had considered the beginning of violence reduction series as a step toward long road to peace. Besides that, the US chargé d’affaires, Ross Wilson wrote on his twitter that reduction of violence can be considered as an important step but much work remains. Taking these remarks into consideration, peace is not as close as is it thought of and much work remains.

Although, the US reports about development in peace talks with Taliban, leaders of the National Unity Government (NUG) as faced sever challenges inside the country. Such quarrels can weaken the national consensus on peace and will develop another problem as well. It is required that electoral disputes should be put aside for now and the peace should be focused on. The entire parties should keep their words during the violence reduction week. Regional countries and international community should help Afghan nation in eliminating the lack of confidence, and to expose those circles that want to jeopardize the violence reduction week and the ongoing peace series for their little personal interests.

Afghan leaders are also asked to play a third-party role in the disputes between both leading teams and to prevent parallel government along every other kind of revolt that cause hinders against peace. If the disputes over peace continues, it is not too far that the hopes for peace will be vanished and the war will have intensified again.