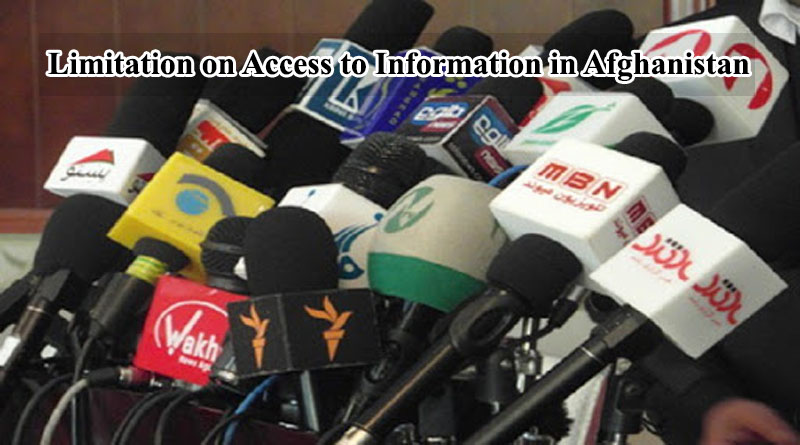 Wahid Omar, the President’s senior adviser on public relations and strategic affairs, said in response to a media outcry that the government is ready to address the protest. He also called on the protesting media to determine when and where they were in trouble. He added that only the Presidential Spokespersons shared 10387 cases of information to the media. (4)

A number of media outlets have protested about lack of access to information while former and current Afghan officials have taken freedom of expression as one of their achievements and have frequently pledged their support it. The analysis seeks to address the problem of access to information and provide solutions in accordance with the Constitution and the Mass Media Law.

“Every person has the right to freedom of thought and speech, which includes the right to seek, obtain and disseminate information and views within the limit of law without any abuse or restriction by the government or officials. The right also includes free activity of means of publication, distribution, and reception of information.”

“Government shall support, strengthen, and guarantee the freedom of mass media. No real or legal person including government and government offices may ban, prohibit, censor or limit the free operation of informational and news media or otherwise interfere in their affairs.” (6)

The right to seek information from government institutions and its approachability is enshrined in Article 5 of the Mass Media Law: “Every person has the right to request and receive information from the state.” (7) However, the right is conditioned as stated in remaining part of the article: “Government shall provide the information sought by the citizens, unless the information sought is confidential and its disclosure endangers the security, national interests and territorial integrity of the country, or damages the rights of other people.” (8) Article 5 of the Afghan Construction also states that: This right shall have no limit except when harming rights of others as well as public security.” (9)

Since many previous times, any information and statistics stored in various departments are considered a state secret; and thus, the relevant authorities, including officials and employees, are obliged to protect it.

After the formation of new government led by former Afghan President Hamid Karzai in 1382, the media has significantly developed in the country. There are, however, hundreds of visual, audio, print and other media operating in every corner of Afghanistan today. Despite the rapid growth of media in the country, the Afghan media community is still struggling with many quality-related problems, including one that has been limitation of access to information by Afghan government agencies.

While Afghanistan is said to have the best law on media, complaints are often raised by the media that the government agencies are limiting access to information, the most recent of which is the letter of protest by some 30 private visuals, audio and print media in the country.

Unfortunately, media problems are not the only constraints to access to information, and lack of security, and violence against journalists is another serious challenge facing the media in Afghanistan.

The Cabinet recently adopted a regulation that seeks to ensure the safety of media persons, expedite the process of violence against them, and protect the career and professional rights of media persons. Let’s see to what extent this regulation can be really effective in reducing the challenges that journalists and reporters are faced with in the country.

1- The first solution is to comply with the uncontained constitution and the Afghan Mass Media Law firstly by the government and then by the country’s media. It is because of the inconsistency of media laws that make the government to limit access to information, the government not only has no right to impose restrictions on access to information under the constitution and the country’s media law, but it must also take the necessary measures and provide facilities in this regard.