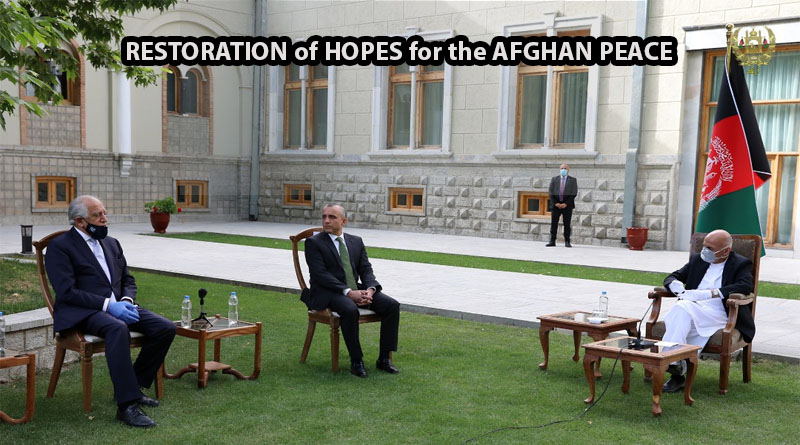 The agreement for bringing peace to Afghanistan was signed on 29th February, 2020 between the Taliban and the US. Both sides have shown commitment towards the implementation of the deal. However, instigation of the intra-Afghan dialogue; a key element of the agreement has been hindered due to disagreements over the prisoner’s release. President Mohammad Ashraf Ghani has recently said to the Atlantic Council during an online conversation that the Afghan government will soon release the remaining 2000 inmates. The Taliban and U.S. officials welcomed the latest progress in the peace process. The Taliban have also declared that the intra-Afghan talks will commence one week after the release of all 5000 prisoners. Reduction in violence and leniency regarding peace process by both sides have apparently brought the Afghan nation closer to peace and reconciliation.

Role of Pakistan in the Current Peace Efforts

After the peace deal in Doha, Zalmai Khalilzad, special representative of the US had several visits to Pakistan. Khalilzad visited Qatar and Pakistan before his arrival to Afghanistan a few days ago. He expressed gratitude for Pakistan’s constructive role in the Afghan peace.

After Zalmai Khalilzad, Pakistan’s army chief General Qamar Javed Bajwa also visited Kabul, and met with President Ghani and chairman of High council for National Reconciliation Abdullah Abdullah. His visit to Kabul indicates that Pakistan still has a key role in the Afghan peace and its support is vital for the success of the peace talks. Pakistan strives to benefit from the peace process by ensuring that the Afghan soil will not be used against Pakistan in the future. General Bajwa’s visit was also aiming for the same purpose. On the other hand, Pakistan’s concern might be due to Khalilzad’s attempt to encourage India to meet face to face with the Taliban. Inclusion of India in the Afghan peace is apparently for preventing any probable challenges towards peace. Also, the US might be striving to strengthen its strategic partnership with India and to reduce the influences of China and Russia. It seems to be a concern for Pakistan and its partner country China, as both countries are worried that India might use the Afghan soil against Pakistan and economic interests of China in the region. However, the Afghan official assured general Bajwa during his visit that the Afghan soil will not be used against any country. Seemingly, General Bajwa visited Kabul to attain such assurance and alert the Afghan officials about concerning matters.

Attempts to Sabotage the Peace Process

Truly, there are some local and foreign players whose interests are connected to the current war and, therefore, they strive to sabotage the peace process. We have witnessed earlier that armed attacks used to increase and influential people from both sides were being killed and captured whenever the peace talks were in progress.

Even though the recent progress in the peace process was welcomed locally and internationally, but as an attempt of sabotaging the peace process, Mohammad Ayaz Niazai, a renowned religious scholar and Imam of Kabul’s Wazir Akbar Khan Mosque was killed in bomb explosion on 2nd June, 2020. The Taliban condemned the attack on Ayaz Niazai and called it a big crime. Later, the Afghan government appointed a delegation to investigate the attack. Similar attacks occurred on 12th June, 2020 when Azizullah Mufleh and Mawlavi Ainullah; two well-known scholars and speakers were killed in Kabul’s Sher Shah Soori Mosque and Takhar’s Chah Aab district respectively.

As scholars hold an extraordinary place among people of Afghanistan and their stance in national and religious matters are greatly respected, their killing can only be a part of wrongdoings of those who want to reestablish distrust and create obstacles for the peace process.

Since the Taliban and the Afghan government mutually condemned the recent attacks on scholars, this can only indicate that some local and foreign groups still consider the peace as threat to their interests and are concerned about the commencement of Intra-Afghan dialogue.

Peace Process and the Remaining Prisoners

In an exclusive interview with the Atlantic Council, President Mohammad Ashraf Ghani has declared that the Afghan government will release the remaining 2000 prisoners. The Taliban welcomed President Ghani’s statement and expressed their readiness for the Intra-Afghan dialogue. As the prisoners release is presumed as a prerequisite for the commencement of Intra-Afghan dialogue, the latest positive statements about the release have establish a healthier environment of trust and assurance. The Taliban are also willing to release the remaining number of prisoners from their prisons.

As planned, the intra-Afghan talks will begin after the release of all prisoners. However, a significant element of the talks will be perseverance of the current government. The Taliban are against the current administration to remain in power and purposed formation of an interim government. However, the Afghan president has once again rejected the idea of an interim government during his interview with the Atlantic Council, and has said that he will not repeat the unsuccessful experience of the former president Dr. Najibullah, and he will not resign from the presidency. Apparently, such statements indicate that there is a long way towards peace and reconciliation.

As the Afghan peace has comparatively greater chance of success considering the latest progresses, the Afghan government and the Taliban should take advantage of the opportunity by strengthening confidence and trust, and accomplish the remaining stages towards peace in a sensible manner. Both sides should hasten the prisoners release process in order to open doors for the intra-Afghan dialogue. In addition, the Taliban and the Afghan government should also strive to avert all attempts of local and foreign bodies that intend to sabotage the peace process.

In addition, all countries in the region that are interested in the Afghan peace process should be reassured that the Afghan soil will not be used against any country. In this regard, the Afghan government should have the support of international community.

Attacks on religious scholars, politicians, and national figures is a failed attempt of sabotaging the peace process. They should be prevented and their contrivers should be exposed, since some groups might be striving to prevent or interrupt the peace process.